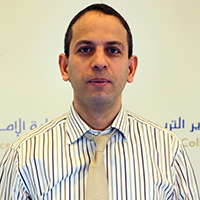 Dr. Mohamed Seghier has more than 20 years of experience in functional neuroimaging, brain mapping, and cognitive neuroscience. He holds a PhD degree in using functional MRI from Joseph Fourier University (Grenoble-France). He did a post-doc at Geneva University Hospitals (Switzerland) in the field of clinical neuroscience where he used neuroimaging methods to study brain function in people with brain disorders. Between 2006 and 2015, he held the position of Senior Research Fellow at the interdisciplinary Wellcome Centre for Human Neuroimaging, University College London (UCL) in the United Kingdom. He has introduced novel ways of investigating inter-subject variability in brain function. His research at UCL covered different areas in brain recovery after stroke, brain segmentation, brain lateralization, pattern recognition, brain connectivity and lesion-symptom mapping.

Dr. Seghier joined ECAE in August 2015 where he co-founded the Cognitive Neuroimaging Unit and co-developed an accredited PhD program in Educational Neuroscience. Since September 2020, he has been working at both ECAE and Khalifa University. His current aim is to characterize the different sources of inter-subject variability in brain function in terms of structural changes, functional activations, lateralized patterns, and/or interacting networks. This has implications for clinical and educational neuroscience.

Dr. Seghier has wide-ranging experience in research-oriented institutions in many countries such as France, Switzerland, the UK, and the UAE. He has supervised research assistants and many research projects from undergraduate to post-doctoral level. He currently serves as an ad hoc reviewer for many research journals as well as funding bodies in the UK, France, and Switzerland. He previously served as Guest Editor for Neuropsychologia and Frontiers in Human Neuroscience. Since 2018, he has been serving as Editor-in-Chief of Wiley’s IMA journal. Since 2021, he has been serving as Handling Editor at Neuroimage (Elsevier).