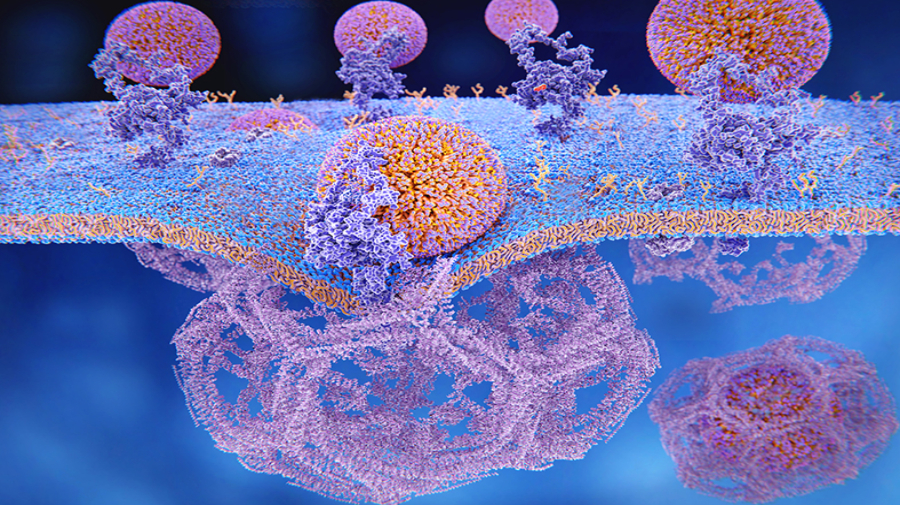 A paper published by Khalifa university faculty has enhanced understanding of nanoparticle toxicity, specifically which uptake pathway contributes most to the damaging effects of silver on a cellular level.
Nanoparticles are defined as materials that are between 1 and 100 nanometers. Metal and metal oxide nanoparticles (NPs) are used in many different kinds applications and products – like deodorants,
sunblock, electronics and even clothing, for their known and beneficial functions on macro scale. The Global Nanomaterials market was valued at USD7.3 billion in 2016 and is growing at a rate of 15%
annually, with a projected value of USD16.8 billion by 2022. However, how they behave on the nanoscale is not as well known, resulting in unplanned and unwanted impacts to plants and animals in
our environment.

“There is a growing body of literature to which I and my collaborators have contributed, that many nanoparticles cause oxidative stress because they stimulate production of reactive oxygen species. We
have found that this damages proteins in the cell by oxidizing them directly. It is unclear presently why some nanoparticles are very toxic while others are not,” said Dr. David Sheehan, Professor of Chemistry
and Dean of the College of Arts and Sciences.

Dr. Sheehan recently coauthored a paper titled “Redox proteomic insights into involvement of clathrin-mediated endocytosis in silver nanoparticle toxicity to Mytilus galloprovincialis” in the journal PLoS One
in collaboration with a research group at the University of Carthage in Tunisia.

Mollusks, as filter-feeders, are particularly sensitive to metallic micro-pollutants, as they extract and concentrate metals in their tissues. This makes them an ideal organism to study to research the impact
of nanoparticles.

“Bivalves like mollusks can be seen as a type of lab rat to assess aspects of nanoparticle toxicology, which is also relevant to human health. The idea was to selectively block uptake of the silver
nanoparticles by inhibiting each of the two main uptake mechanisms. In this way we could assess which was contributing most to protecting against toxicity,” explained Dr. David Sheehan, Professor of
Chemistry and Dean of the College of Arts and Sciences.

The silver nanoparticle is mainly absorbed by the mollusk through clathrin-mediated endocytosis – which is a cellular process where a eukaryotic cell absorbs proteins and fats through its membranes. In
their experiment, the team selectively blocked the clathrin-mediated uptake pathway with an inhibitor, the Parkinson’s Disease drug amantadine. Clathrin is a protein that plays a major role in the formation of
the large coated large structures within a cell that are made up of a liquid enclosed by a lipid bilayer, known as vesicles.

“This resulted in reduced toxicity of the silver nanoparticles, thus showing that this uptake pathway facilitates NP toxicity. Our study really just wanted to ask the question, which uptake pathway
contributes most to NP toxicity and was not primarily intended to point to prevention of NP toxicity,” Dr. Sheehan added.

He explained that this points future research to exploring the fate of clathrin-coated pits within the cell in assessing the role of intracellular trafficking in nanoparticle toxicity.

“We would like to generalize this study to see if other nanoparticles are taken up in the same way. In particular, I want to study iron NPs because iron is a toxic chemical that triggers production of “reactive
oxygen species” but also, iron is magnetic. In preliminary work with cultured human cells, I have found the cells become magnetized once iron NPs are taken up. This would, in principle, mean that we could
select subcellular organelles as the NPS are trafficked through the cell towards lysosomes and build up a picture of the trafficking process and how it contributes to toxicity,” Dr. Sheehan concluded.