Something unusual is happening on the UAE’s coastal saltflats. A mineral known as dolomite – a crystalline rock containing calcium, magnesium and carbon – is slowly being formed.

Not so odd, you might think – rocks are laid down all the time, albeit over many millions of years and under the right conditions.

But dolomite is different. Until recently it was thought that it formed only under the kind of extremes of heat and pressure that haven’t been seen on Earth for many millions of years. So what is going on in Abu Dhabi? 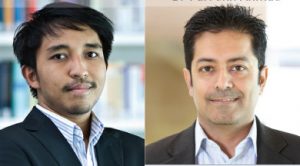 The answer, it seems, is down to the unique and resilient community of microbes that inhabit these barren, salt-crusted sabkha sediments.

These microbes have a remarkable ability to modify their environmental chemistry and overcome the barriers that otherwise prevent dolomite formation. They form sticky biofilms, some thick enough to be visible, which appear to act as highly customised templates on which the mineral can grow.

In this regard, the communities  can be likened to living, breathing catalysts, pulling together the building blocks of dolomite from the environment to make a layered, organised and growing dolomite crystal. They are not the only organisms to pull off biomineralisation, of course.

Various others manage it, synthesising countless structures that are among nature’s toughest and most intricate, such as seashells, pearls and even our own teeth – all formed under remarkably low-energy, low-pressure and non-toxic conditions.

To further explore this subject, our research team at Masdar Institute took to Abu Dhabi’s sabkhas to investigate the processes behind the formation of dolomite here, in the hope of speeding up the process and similar reactions in the lab.

Looking at the precise molecular structures at play here has helped us understand how dolomite is assembled molecule by molecule through dynamic interactions between sabkha microbes, the sticky ‘mortar’ that makes up their biofilms, and the local chemistry.

Eventually, the mechanisms we are piecing together could help our industries develop greener ways of repairing or fabricating materials than the classic industrial “heat, beat and treat” methods, which typically require intensive energy, pressure and toxic chemical input.

It works the other way, too. Several organisms have natural mechanisms that regulate the growth of hard structures – such as sea shells that stop growing once sufficiently large. Understanding these processes could lead us to gentler and more effective ways of suppressing undesirable mineral buildup in pipelines or on buildings, which if left untreated can cause damage, line losses, and great expense.

Such strategies are made even more compelling by the prospect of permanently sequestering atmospheric or dissolved carbon dioxide into inert, solid structures – preventing potential climate-harming effects.

And the UAE has no shortage of raw materials – its huge desalination plants produce vast amounts of concentrated brine.

This research could provide a better outlet for all that brine than returning it to the Arabian Gulf, which over time will make that body of water ever more saline, and eventually degrade its ecosystems.

The challenge now is to replicate these ingenious, natural processes in a way that is cost and time-effective.

Wan Abdul Matiin is a research engineer at the Masdar Institute’s Bio-Energy and Environmental Laboratory where Dr Farrukh Ahmad is an associate professor of water and environmental engineering.