The SBRC was established byMasdar Institute, which later became part of the Khalifa University, with Etihad Airways, Boeing and Honeywell UOP. The founding members were later joined by ADNOC Refining, along with Safran, GE, and Bauer Resources.

The Seawater Energy and Agriculture System (SEAS) is the flagship project of the SBRC. This project combines an integrated system of aquaculture, halo-agriculture, and mangrove silvicultureto produce sustainable biofuels for aviation and seafood.

The first airplane flight fueled with jet fuel produced through SBRC’s SEAS is scheduled for mid-January 2019. 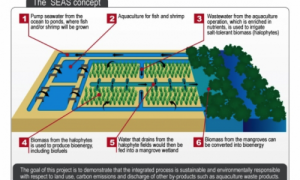 The 2-hectare SEAS pilot facility was inaugurated in Masdar City in 2016. The SEAS is a pioneering project — the world’s first desert bionetwork to produce food and fuel from seawater supplies in arid land. The initial batch of Salicornia plants was planted in 2016 at the two hectare SEAS pilot site, and there have been two successful crops until now.

The SEAS puts forward an innovative techno-economic model in which the aquaculture farm, which provides nutrients for the halophyte (salt-tolerant) plants, is the financial driver of the system and makes the project commercially viable. The first flight with a small amount of jet fuel produced from Salicornia oil grown with salt water in desert sand in Abu Dhabi is scheduled for mid-January 2019. The next step for SEAS is to build a demonstration scale facility at the 200-hectare level, which will unlock the knowledge required to take this to commercial scale.

SEAS is being undertaken at a pilot research facility in Masdar City. It consists of:

The aquaculture section comprises six open, lined ponds with a total capacity of 1,277 m3. Water is fed into the ponds from a seawater blend tank.

The halo-agriculture section consists of eight Salicornia fields, each with a surface area of 685 m2. The Salicornia fields are equipped with perforated pipes, which drain excess irrigation water that can either be recirculated to the irrigation pump or passed on toward the mangrove swamps as continuous effluent.

The mangrove forest section consists of four artificial wetlands/swamps as well as a terminal exit water trench. Water to the swamps is sourced from the Salicornia effluent and from the drain pump station. Motorized pumps mimic tidal changes by pumping the mangrove swamps to the required level (high-tide) and then allowing it to drain under gravity (low-tide) to the tidal pump station.

Once the swamps have undergone a full tidal cycle they are allowed to gravity-drain overnight and the water is pumped to the exit water trench. The trench essentially stores all excess water that has passed through the system, but it also recirculates water back into the SEAS system by feeding into the seawater blend tank which supplies the aquaculture ponds.

Khalifa University of Science and Technology

The Khalifa University of Science and Technology (KU) is a research university dedicated to the advancement of learning through teaching and research and the discovery and application of knowledge. KU was established through the merger of the Masdar Institute of Science and Technology (MI), Khalifa University of Science, Technology and Research (KUSTAR) and the Petroleum Institute (PI) to create one world-class, research-intensive institution, producing world leaders and critical thinkers in applied science and engineering. KU endeavors to be a catalyst to the growth of Abu Dhabi and the UAE’s rapidly developing knowledge economy as an education destination of choice and a global leader among research intensive universities. For more information, please visit https://www.ku.ac.ae

Etihad Airways airline was established by Royal (Emiri) Decree in July 2003 and is wholly owned by the Government of Abu Dhabi with a mandate to operate safely, commercially and profitably. Etihad’s guests are atthe heart of everything it does. The airline is in a perfect geographical position and offers its guests a network of over 110 passenger and cargo destinations across six continents, with a young and environmentally friendly fleet of more than 120 aircraft. Etihad is also one of five key business divisions of the Etihad Aviation Group (EAG). The diversified global aviation and travel group also includes Etihad Airways Engineering, Etihad Airport Services, HalaGroup and Airline Equity Partners. For more information, please visit: www.etihad.com

Boeing is the world’s largest aerospace company and leading manufacturer of commercial jetliners and defense, space and security systems. A top US exporter, the company supports airlines, and US and allied government customers in 150 countries. Boeing products and tailored services include commercial and military aircraft, satellites, weapons, electronic and defense systems, launch systems, advanced information and communication systems, and performance-based logistics and training. For more information on TheBoeing Company, please visit www.boeing.com 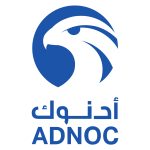 TheAbu Dhabi Oil Refining Company, previously Takreer, was established in 1999 to take over the responsibilities of refining operations from the Abu Dhabi National Oil Company (ADNOC). Its main objective is to develop the refining industry in the UAE, which started with the inauguration of Abu Dhabi Refinery in 1976 and RuwaisRefinery in 1982.  It is considered a prominent oil refining company regionally and internationally contributing to oil markets and the rapid growth of the UAE economy. For more information on ADNOC, please visit https://www.adnoc.ae/en/adnoc-refining

It brings vital components of the nation’s economic future together