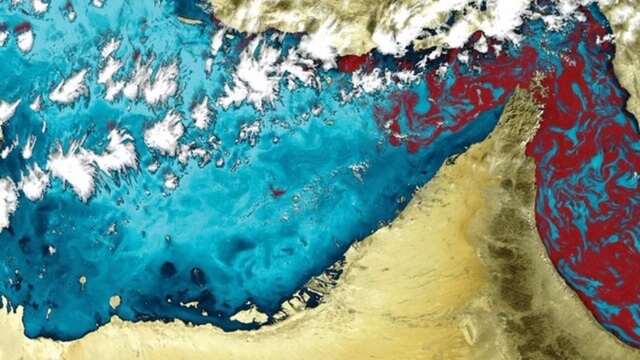 Increasing our understanding of the ebbs, flows, and impacts on the Arabian Gulf – the body of water that provides the UAE water for desalination, seafood for local consumption, a transit route for shipping, and a tourism attraction through its coastal areas – is crucial to improving its sustainable management and conservation.

That is why Dr. Maryam Al Shehhi, KU postdoctoral fellow and alumnus of the Masdar Institute, is currently collaborating with researchers at the Massachusetts Institute of Technology (MIT) to develop advanced models of the Arabian Gulf using numerical and theoretical frameworks supported by field and satellite data.

“The Arabian Gulf is central to many functions of the UAE – our desalination plants, local fisheries, transport of oil, etc. For all these reasons and more, there is a need to build a physical-biogeochemical marine model calibrated for the Gulf that includes the influence of transportation, mixing and diffusion processes driven by tides, winds, and density grades,” Dr. Al Shehhi explained.

The UAE is heavily reliant on the Arabian Gulf for the desalinated water that makes up for its shortfall in natural freshwater – with natural gas-powered thermal desalination estimated to produce around 80% of the country’s domestic water. The Arabian Gulf is also the source of the UAE’s many beaches, which are a huge draw in the country’s travel and leisure sector, which accounted for 11.3 percent of the UAE’s gross domestic product in 2017, according to data released by the World Travel and Tourism Council. The UAE and all other countries bordering the Arabian Gulf also trawl its waters for seafood, with the United Nations Environment Program estimating that some 298,490 tons of seafood were harvested from the Arabian Gulf in 2011-2012.

Additionally, with the UAE, Saudi Arabia and other major oil and gas producing countries bordering the Arabian Gulf, an estimated 30% of the world’s crude oil is shipped through the Strait of Hormuz alone, which is the small gap between the Arabian Gulf and the Gulf of Oman. Over 90% of the global trade flows by weight passes through the Strait of Hormuz according to the International Maritime Organization.

“Given the many inputs and influences on the Arabian Gulf, including more than 100 desalination plants that discharge hot and salty effluent that can significantly change the physical and biochemical properties of the waters and the cargo ships that release ballast water that often contains oil and invasive species. Therefore, it is of great importance to understand the risks Arabian Gulf faces, and how they can play out,” Dr. Al Shehhi explained.

She has been working with KU Professor and Director of the Research Center for Renewable Energy Mapping and Assessment Dr. Hosni Ghedira, and MIT Cecil and Ida Green Professor of Oceanography Dr. John Marshall to develop a marine model that takes all of the many complex factors that impact and influence the Arabian Gulf into consideration, which was recently featured on the MIT News website.Dr. Al Shehhi graduated from the Masdar Institute in 2016 as the first UAE National to gain a PhD in earth observation and ocean color remote sensing, and later joined Masdar Institute as a faculty member.

“Such models could be used to predict what can happen around offshore drilling sites, the trajectories and landing points of accidental marine pollution events (e.g. tracking oil spills and harmful algae bloom events), nutrient cycles, contaminant dispersion, eutrophication and aquaculture-ecosystem interactions. Moreover, the models can be set up to operate in real time and forecasting schemes developed depending on the application,” Dr. Al Shehhi explained.

Harmful algae bloom events – or HABS – are potentially harmful to marine life, water quality, human health, and desalination plants, and have been reportedly increasing in the Arabian Gulf due to rising human activity and its resultant pollution.

The team is working with an existing MIT atmosphere, ocean, and climate model – the MIT General Circulation Model (MITgcm) – which they are adapting and tailoring to address the specific characteristics of, and applications to, the Gulf region. The model has never been used in regional oceanography, and one of the challenges Dr. Al Shehhi and the team face is adapting it to new mixing parameterizations and the biogeochemical modeling that reflect the unique parameters of the Arabian Gulf. A biogeochemical model, also developed at MIT, will then be overlaid on the physical model to study the bio-chemical properties of the Gulf region. This ocean component will then be coupled to an existing regional atmospheric/chemical model which is already operational at Khalifa University. The model is currently being integrated with the atmospheric data generated by Khalifa University’s Research Center for Renewable Energy Mapping and Assessment, which uses satellites to gather atmospheric data.

“This modelling work can lay the ground for coupling of ocean circulation with high resolution atmospheric models already under development at Khalifa University, thus leading to a coupled atmosphere-ocean system that could have a wide range of applications to monitor marine environmental conditions and changes in the Gulf region,” Dr. Al Shehhi shared.

Improving available monitoring models for the Arabian Gulf can provide robust systems for many types of users in the UAE and wider region. For instance, the UAE Ministry of Climate Change and Environment could benefit from enhanced monitoring and forecasting of water quality to alert desalination plants of pollution incidents that can damage their systems. The models can be set up for real time operation or forecasting depending on the desired application.

“I am returning to the UAE in March, and where I will work with my colleagues at Khalifa University to continue to advance this project. I am confident the Arabian Gulf model we develop will enhance the current marine monitoring system, to work in real-time to improve the UAE’s preparedness for potential risks of marine pollution, mainly from harmful algae blooms and oil spills,” Dr. Al Shehhi concluded.