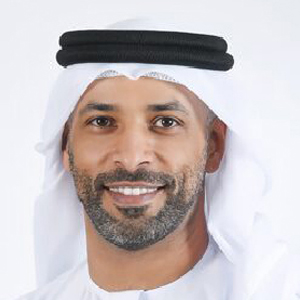 Dr. Ebrahim Alhajri is currently the Senior Vice President of Support Services and an Associate Professor of Mechanical Engineering. In his capacity as SVP he leads the University’s operational plans, budget, and administrative and financial strategy, in order to unlock KU’s organizational potential.

Dr. Alhajri is a senior-level management executive who brings over 10 years of extensive experience in management, engineering and technology, research and innovation in the field of higher education. Dr. Alhajri joined The Petroleum Institute as a faculty member in 2009 after receiving his PhD in Mechanical Engineering from the University of Maryland, USA. He received his masters in Mechanical Engineering from the Colorado University and his bachelor from University of Arizona.

In 2012, he was appointed as Director of External Relations and Collaborations at the Petroleum Institute. In 2018, Dr. Alhajri became Director of Continuing Education at Khalifa University in addition to his role as an Associate Professor of Mechanical Engineering, while also serving as the Vice Chancellor of Emirates College for Advanced Education (ECAE), where he helped transform the college into a leading postgraduate college, increasing research funding and output by three-folds. Dr. Alhajri also led an exceptional strategic shift in the college support activities, delivering service automation, live institutional data & information dashboards, improved Budget utilization, and optimized procurement operations.

Dr. Al Hajri is a recipient of several awards, including Best Service Award 2012 at the Petroleum Institute, The Fluid Engineering Division awarded an Honorable Mention in the 2011 Young Engineering Paper Contest from ASME, Rashid Award for Scientific Outstanding 2010, Special Recognition Award of ADNOC HSE Awards 2010, First place winner PI Sustainability Award 2010, Appreciation for being granted funding by ASHRAE for a distinguished research and Grant-in-aid from the American Society of Heating, Refrigeration and Air Conditioning Engineering.

Dr. Al Hajri is a former President of the ASHRAE Falcon Chapter in the UAE and has been serving as a member of the chapter’s board of governance since 2010. He is also a member and a chair of several technical committees in ASHRAE and ASME.

Dr. Al Hajri has published a number of articles in highly recognized journals and conference proceedings. He has organized and co-organized local and international workshops and conference and was invited to speak in several international and local conferences. He also serves as a reviewer of several journals in the area relevant to thermal-fluids and energy systems.

His research interest areas are within conventional and micro-channel mass/heat exchangers design, micro reactors, and energy efficiency and recovery. He worked on research projects such as: evaluation of heat transfer and pressure drop of enhanced tubes, external fouling of a fin-fan heat exchanger, waste heat recovery using a double absorption systems, exploration of geothermal heat diffusion mechanism and more.