Dr. Haralampos Hatzikirou received his Ph.D. from TU Dresden in 2009 as a Marie Curie fellow, after finishing his  M.Sc. in Applied Mathematics at TU Kaiserslautern in 2003 and his BSc in Mathematics at Aristotle University of Thessaloniki. He then worked as a postdoc in Biomedical Informatics at the University of Texas at Houston and in the Pathology department of New Mexico University in Albuquerque. In 2012, he returned to Germany where he became a group leader at TU Dresden and at Helmholtz Center for Infection Research. In 2020, he joined the faculty of Mathematics at Khalifa University as an Associate Professor.

Dr. Hatzikirou's research is focused on developing a mathematical theory for cell decision-making in pathophysiological multicellular systems that has profound implications in tissue development and in biomedical problems, such as cancer or bacterial infections. Also, he develops novel methods that fuse mechanistic modeling and machine learning.

He has published more than 60 papers (Google Scholar h-index>25) in many prestigious journals and he acquired more than 3 million euros of research funding (including German and European grants, and a prestigious Volkswagenstiftung). He has held  >30 invited talks and >20 contributed talks worldwide. Finally, he has supervised 6 postdocs, 5 Ph.D., and 4 M.Sc. students.

My central question: how can we make biomedical predictions under uncertainy?

In clinical practice, a plethora of examinations is conducted to assess the state of a certain pathology. These span from blood sample analysis, clinical imaging (e.g. CT, MRI) and biopsy sampling are among the most important diagnostic and prognostic tools. Such medical data correspond to snapshots in time of the patient’s state, since current standard of care (SoC) is not based on emergent technologies of real-time measurements, such as liquid biopsies or biosensors. Moreover, clinical data refer to different biological scales (Fig. 1), since imaging, such as MRI, typically provides a organ level picture of a disease (macroscopic), biopsies represent cellular patterns at a tissue (mesoscopic) level and -omics, FACS or molecular markers allow for  sub-cellular insights. Finally, the biophysical mechanisms that regulate phenomena in all these scales are not completely known. For instance, we still do not fully understand the molecular mechanisms through which a cell encodes and decodes its microenvironmental information into phenotypic decisions and how these decisions impact the macroscopic tumour progression dynamics.

Therefore, current clinical care faces the following challenges:  (C1) data collection is sparse in time since it relies on patient’s clinical presentation, (C2) we lack the knowledge/uncertainty of the mechanisms involved in regulating these data variables across different scales (structural uncertainty), and (C3) medical data are multiscale. Therefore, integrating these data to predict the future of a disease and propose an appropriate treatment (e.g., choice of a drug targeting proteins expressed in the tumour) is a formidable task.  The overall goals of my research is improving the SoC by:

(2) Developing a methodologies combining multiscale modelling and machine learning that allows for data integration and enable predictions under structural uncertainty.

Biomedical problems are highly complex and multi-dimensional. Typically, only a small part of the relevant variables/data can be modelled by virtue of mechanistic modelling, since it hampered by the lack of the exact knowledge of the involved phenomena (C2). Typical non-modellable variables are -omics data, since the underlying regulatory networks dynamics are largely unknown and their coupling with higher scales is also non trivial (C3). Mechanistic models are great in analyzing the qualitative dynamic behavior of the system but rarely provide quantitative accurate predictions. On the other hand, statistical/machine learning methods are well-suited for quantitative reproduction the total observed data but they do not allow for a mechanistic understanding of the investigated problem. To overcome the afore-mentioned difficulties, I propose a grey-box methodogy that combines mechanistic modelling and machine learning. The idea is to develop a mechanistic model of the modellable variables that will serve an intelligent prior knowledge for the true function of system observables. In turn, this prior will be integrated in a Bayesian framework along with the non-modellable data. As a consequence, the resulting posterior is expected to be an improved observable prediction, due to the contribution of the non-modellable data on the mechanistic predictions. The underlying assumption of the method is that the correlations of the unmodellable data (e.g. genomic data) do not change too much in time. This method can be generalized to any type of non-modellable variables. 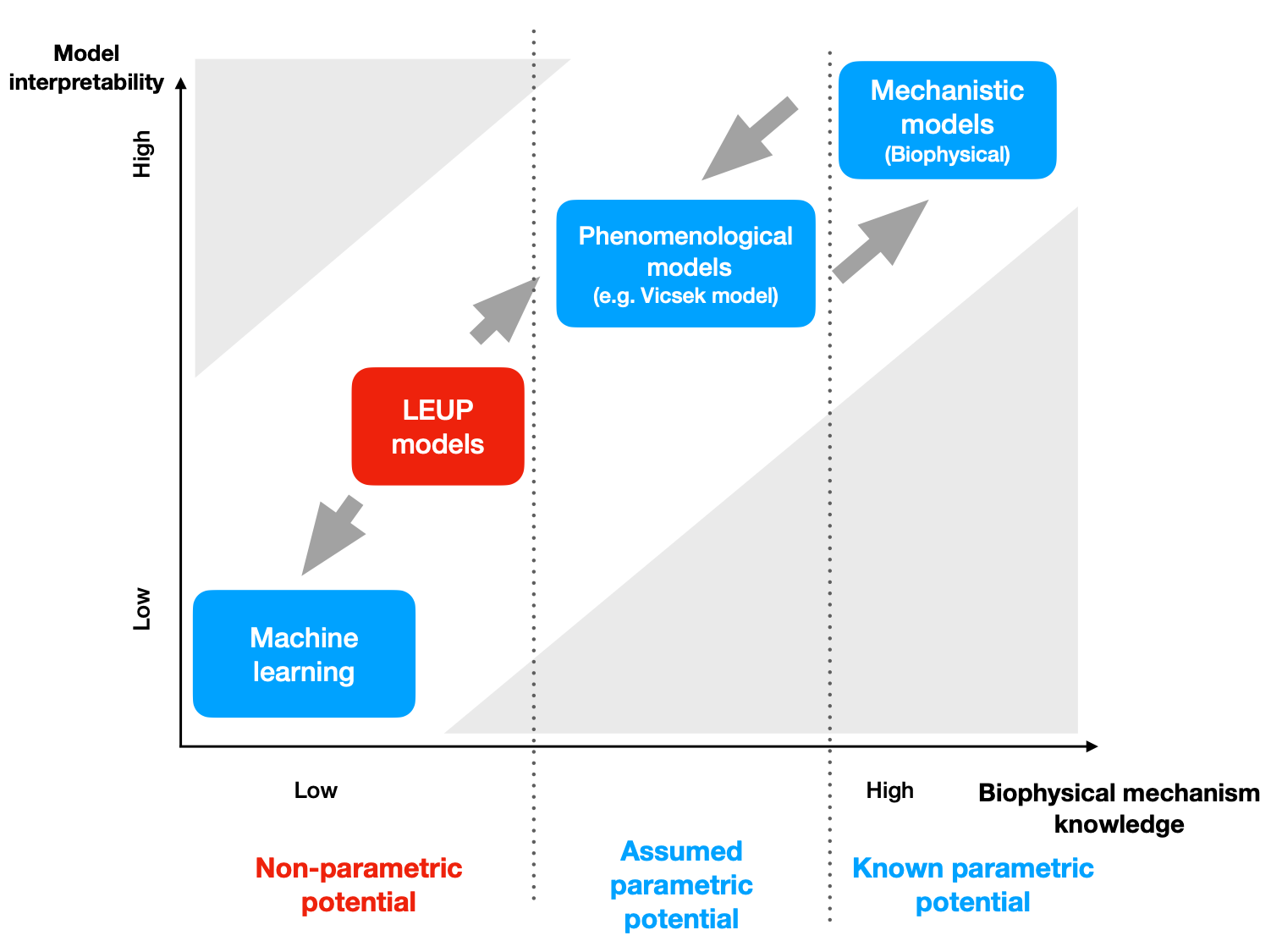 In the above formula, X denotes the intrinsic state vector of the cell, Y the extrinsic one and Z the intrinsic partition function. Free parameters of the model are (i) β models the compliance of the system to the LEUP and (ii) the local interaction radius of each cell. Such an energy-like principle addresses the two fundamental issues, since (i) it allows us to develop a bottom-up multicellular statistical mechanics theory for cell decision-making, and (ii) its Bayesian nature allows for circumventing the underlying uncertainty of the involved regulatory mechanisms of phenotypic decision (Fig. 2). Interestingly, we can integrate any type of related data, e.g. –omics, simply as constraints in the optimization of the energy functional.  Similarly, upon the prior  knowledge of a certain signalling pathway, we could integrate the model predictions of such pathways as constrains in our LEUP variational. As a proof of principle, we have applied the LEUP to modeling cell migration by treating cells as interacting decision-makers (e.g. velocity, locomotion force, receptor distribution) (Hatzikirou, JMBM, 2018, Barua et al, bioRxiv, 2018]).

The development and validation of LEUP has been funded from the Volkswagenstiftung, within the call “Life?  A Fresh Scientific Approach to the Basic Principles of Life”, with 1.5 million euros for 5 years. The latter involves validating the LEUP in four different cell decision-making systems spanning from hematopoietic and immune cell differentiation (T-cell) and plasticity (macrophages) to bacterial motility and proliferation. 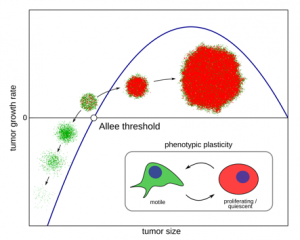 The impact of cancer cell plasticity in tumor progression

Tumor heterogeneity is the result of the dynamic interplay of tumor and stromal/microenvironmental cells, which in turn is pivotal for therapy resistance. An example of cancer cell adaptation, particularly to nutrient fluctuations, is the migration/proliferation plasticity, or Go-or-Grow,  that I pioneered in exemplifying its impact  in terms of tumor invasion and therapy resistance, e.g. in [Hatzikirou et al, 2012, Boettger et al 2015, Alfonso et al 2016, Mascheroni et al 2019].

A crucial part of the tumor’s microenvironment is composed by the immune cells. Immune cells exhibit a large degree of phenotypic plasticity resulting into a plethora of immune phenotypes. For instance, T-cells can be found either cytotoxic or regulatory. Similarly, phenotypic polarization of macrophages is prominent in tumors, spanning from anti- (M1) to pro-tumoral (M2) phenotypes. The balance between pro- and anti-tumoral immune populations is critical for the tumor fate. In the light of novel immune therapies, such as checkpoint inhibitors or CTLA4, is important to elucidate their dynamics in the tumor context. However, it not yet understood why these therapies fail and how could be combined with other therapeutic modalities. This lies in the lack of understanding the dynamic interplay of two phenotypically plastic populations, such as tumor and immune cells. To resolve the later, I will use the LEUP principle to develop a comprehensive predictive theory and translate this into designing efficient combinatorial therapies. Model parameters are typically informed by using medical imaging data, such as biopsies and radiological images, kinetic cell data and ex-vivo experiments.

Cancer is no more a disease of cells than a traffic jam is a disease of cars. A lifetime of study of the internal-combustion engine would not help anyone understand our traffic problems.

We are open for talented PhD and MSc students that are interested in becoming part of a trans-disciplinary team that develops mathematical and computational methods for biomedical problems.