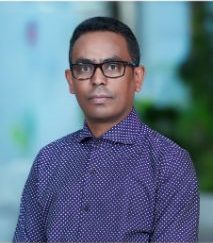 Dr. Berihu Teklu Gebrehiwot is an Assistant Professor at Khalifa University, Abu Dhabi, UAE. He graduated from the University of Milan, Italy, with a Ph.D. in Theoretical Quantum Information under the supervision of Professor Matteo G. A. Paris. He is a theoretician, and his interests include quantum information, quantum estimation, quantum optics, and quantum computation. His main contributions are in the fields of quantum estimation of states and operations, generation and application of entanglement, quantum information, and communication.

He joined as a research fellow of the International Centre for Theoretical Physics (ICTP) at the University of Milan where he returned to investigating quantum phase communication channels in the presence of noise and the quantification of nonlinearity for anharmonic oscillators. One of his important achievements has been analyzing quantum phase communication channels based on phase modulation of coherent states and their performances in the presence of static and dynamical phase diffusion by evaluating the channel capacity for ideal and realistic phase receivers. Another result was to propose a measure of nonlinearity of a quantum oscillator with the advantage of considering only the properties of the ground state, namely its non-Gaussianity. For that purpose, we made use of a fidelity-based measure. The fidelity-based measure is a renormalized Bures distance between the ground state of the considered oscillator and the ground state of a reference harmonic oscillator. Then, in order to avoid the introduction of this auxiliary oscillator, we introduce a different measure based on the non-Gaussianity of the ground state.

Dr. Gebrehiwot has been developing collaborations during his research activities with international researchers mainly within the Quantum Technology group at the Centre for Theoretical Atomic, Molecular, and Optical Physics, Queen’s University Belfast, the nonlinearity and nonclassicality in a nanomechanical resonator. He managed to achieve quantitatively the relationship between the nonlinearity of a mechanical resonator and the nonclassicality of its ground state and showed that nonlinearity is a resource to create nonclassical states in mechanical systems. In 2015, he joined the University of Blaise Pascal, France where he focused on Klein tunneling in polariton graphene, taking into account the spinor properties of polaritons, including the spin-anisotropic interactions and the spin-orbit coupling. During this time he also studied the out of equilibrium condensation in periodic polariton lattices and chirality of topological gap solitons in bosonic dimer chains where gap solitons are studied within the mean field approximation, revealing their chiral nature.

He is currently working on projects nonlinear oscillator based computing, quantum thermometry in optomechanics, complex correlations and complex squeezing and on continuous-variable quantum probes in structured environments.