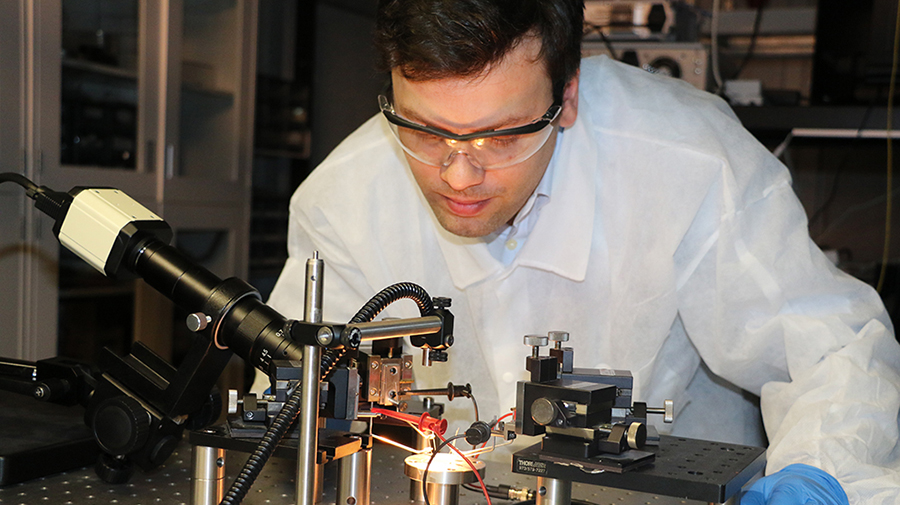 A pioneering research project between Masdar Institute and the Massachusetts Institute of Technology (MIT) is a step closer to using sunlight to turn water into fuel in the form of hydrogen. The team have identified materials and developed unique structures that optimize the process that splits water into its component elements so the hydrogen can be captured and used as a fuel source.

“This research is at the frontier of materials science, photonics and nano-fabrication. It is not yet mature, but we are looking to build the capability and know-how not only for water-splitting but also for other photochemical reactions of interest, like wastewater treatment and high-value chemical production,” explained Dr. Jaime Viegas, Assistant Professor of Microsystems Engineering at Masdar Institute.

While hydrogen is an energy dense fuel with many uses, there are no naturally occurring geological hydrogen reserves. That is why hydrogen is currently produced through high-energy processes that depend on fossil fuels, particularly natural gas. But if a sustainable and clean source of hydrogen could be developed for commercialization, it could provide the world with a truly carbon neutral energy source that can be used in place of many of our carbon intensive energy sources.

“We have lots of solar energy and we have seawater. If we could use water-splitting to produce hydrogen from water with minor pretreatment and limited requirement for fossil fuel sources, then we could open up significant avenues for sustainable and affordable hydrogen fuel use,” Dr. Viegas said.

Water-splitting is a chemical reaction in which water is separated into its component elements of oxygen and hydrogen, so energy-rich hydrogen can play a role in the sustainable energy future. However, breaking a compound into its component elements requires a significant amount of energy, which would typically negate the value of the stored energy storage from the produced hydrogen. That is why water-splitting for hydrogen production has not been able to meaningfully contribute to a sustainable energy equation.

To overcome the energy demand of water-splitting Dr. Viegas and his team have been exploring the use of catalysts that can make water splitting more efficient and sustainable using solar energy. They have identified a number of metal oxide materials and configurations that can capture more of the sun’s energy to split water into its component elements.

“The rationale behind this area of research is to use the light from the sun to power the photochemical splitting of water into hydrogen and oxygen, which you could then store and use later. This offers us a reversible energy cycle, with a hydrogen fuel that, when burned, again produces water as a byproduct,” Dr. Viegas revealed.

The joint research team, which includes UAE National student Meera Al Muhairi, international students Jehad Abed and Frazly Alexander and Class of 2016 alumni Pabitra Dahal, has identified a number of metal oxide materials that can act as effective catalysts, absorbing a greater range of the solar spectrum to facilitate the chemical reaction that splits water into its component elements.

“Most of the sun’s energy exists in the visible and infrared range, with very little in the ultraviolet. Unfortunately the most efficient photocatalysts, such as titanium dioxide, are only sensitive to ultraviolet light, thus only harnessing much less than 5% of sun’s available energy. To be able to absorb as much of solar energy as possible we have used very thin layers of selected metals to assist in the absorption of light in the visible and infrared spectrum, so we can have the same chemical reaction as from UV, but from the entire solar spectrum,” Dr. Viegas explained.

His team has leveraged the same technology and techniques used for the fabrication of microchips to produce a wafer that incorporates the metal oxides on a silicon substrate. The wafer surface is patterned in unique nanocones with tips on the order of 100 nanometers in size, with varying height and spacing, to achieve peak solar energy absorption.

The nanocones are then given coatings of the various metal oxides to tune the optical and electronic properties to achieve the strongest water splitting. This interplay of matter and light produces what is known as a ‘plasmonic effect’, which provides the surface energy boost needed to break the water bonds to produce hydrogen and oxygen.

“In this process of using light on the surface of metal oxides, assisted by the unique patterns we have designed in the metal oxide layers, we can tailor the absorption characteristics of the sunlight and induce the chemical reaction – splitting it to produce water and hydrogen,” he said

The team has recorded promising results for hydrogen generation with some of the identified metal oxides, and has filed an invention disclosure on their discovery. The research has garnered a significant amount of interest in the international scientific community, and was selected to be presented at Frontiers in Optics, Optical Society of America’s centennial meeting held last October in New York.

That is how this research may ultimately contribute to the development of a sustainable and commercially viable hydrogen from from water, which has been a goal of the sustainable energy community for some time.

“We envision a more distant future where we take seawater, drive it through a large panel embedded with the photocatalytic metal oxides, and produce hydrogen and oxygen. When that hydrogen is later used as a fuel source, it produces water that can either be consumed, or again used to produce hydrogen.”

Unlocking the potential of hydrogen using photocatalysis could also expedite a number of innovations and useful advancements. Photocatalysis has the potential to support the transformation of carbon dioxide, an undesirable greenhouse gas, into more valuable fuels like methanol and ethanol. It also has the potential to improve purification technologies, assisting in the decomposition of organic pollutants. The baseline knowledge derived from this area of research can even be applied to petro-chemical reactions through the use of new catalysts to make high-value chemicals, which fits in with the UAE’s industrial and economic goals.

“This dynamic joint project is something very unique in that it has a significant fundamental research focus but with clear potential application, which means it can not only meet a current and identified need, but also potentially be a game-changer in many other areas. We are excited by the promise photocatalytic water-splitting can achieve for the UAE and the world,” Dr. Viegas concluded.