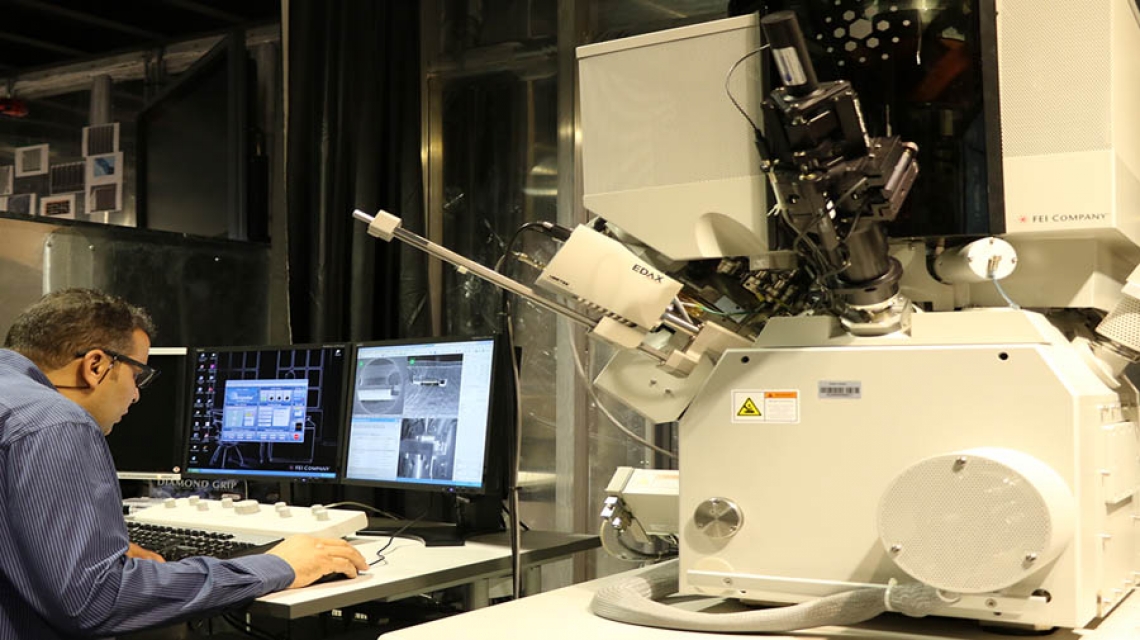 The steel pipelines used to extract and transport natural gas may soon become significantly more resilient against corrosion – a rusting process that damages metal pipes – thanks to an innovative approach being developed at Masdar Institute that helps identify the strongest and most corrosion-resistant steel for natural gas pipelines.

Dr. Mustapha Jouiad, Microscopy Facility Manager & Principal Research Scientist and faculty member in Mechanical Materials Engineering Department, is leading the project, which is sponsored by Saudi Aramco, Saudi Arabia’s state-owned Oil and Gas Company and the world’s largest oil company in terms of production. The goal of this collaborative research is to anticipate corrosion in Saudi Arabia’s natural gas pipeline network, though the research findings could also be used to improve the UAE’s oil and gas operations.

Saudi Arabia and the UAE have some of the world’s largest natural gas reserves, but production of the precious resource remains limited. This is due largely to the high cost of managing internal corrosion in pipelines – an expense that can account for up to 60% of an oil and gas company’s operating costs. For example, in the United States, it is estimated that the annual cost of corrosion in the oil and gas sector is over US$1.3 billion.

Dr. Jouiad believes the key to significantly reducing the high financial and energy costs of managing corrosion in pipelines, is to leverage the strongest, most corrosion-resilient steel.

By simulating hydrogen sulfide build-up on the steel samples, Dr. Jouiad was able to determine which of the two types of steels were able to sustain the greatest amount of corrosion before cracking.

During the simulation, he analyzed the interaction of hydrogen sulfide with steel at the micro-level, which he did with support from Masdar Institute’s advanced analytical electron microscopy tools.

“With the ability to simulate corrosion and analyze its impact on steel at the micro-structural level, we can capture what is happening when and where corrosion occurs, which will help us better understand the driving forces of hydrogen-induced cracking in the steel pipes and how to prevent the build-up of corrosion. This process will also allow us to identify the steels that are more resistant to corrosion,” Dr. Jouiad said.

Much of the cost of managing corrosion is a result of replacing pipes that have cracked – a process that results in the loss of millions of dollars’ worth of unproduced natural gas, as it involves completely halting oil and gas production for several hours. Additionally, cracked pipes can pose serious health and environmental risks, by releasing powerful greenhouse gases into the atmosphere.

By using the most optimal, corrosion-resistant steel, in-service pipe cracking will be prevented, improving the sustainability and safety of operations in oil and gas companies.

Dr. Jouiad’s approach will provide engineers with a critical understanding of how different steel types react to varying concentrations of hydrogen sulfide – information that could lead to the development of key corrosion prevention technologies of great value to the region.

The approach will also provide engineers with insights on the existing corrosion levels inside of pipelines through corrosion-induced simulations, reducing the need to deploy expensive inspection devices into the pipelines, which would in turn significantly reduce the cost of monitoring corrosion.

Conventional mechanical testing of steel is conducted on steel samples measuring 2.5 centimeters thick, as this is the size determined by the American Society for Testing and Materials (ASTM), an international standards organization that develops and publishes technical standards for a wide range of materials.

The steel used in natural gas pipelines is 12 millimeters thick. Thus, the results of the mechanical tests of steel at 2.5 centimeters – which reveal the steel’s breaking strength under pressure, hardness, impact strength and other key properties – do not necessarily apply to that same grade of steel when its thickness is reduced to 12 mm.

Now, thanks to Dr. Jouiad’s research team, engineers will be able to know with a high degree of certainty the mechanical properties of the steels used in natural gas pipelines that are exposed to corrosive environments, as well as how resilient they are to corrosion throughout their lifetime.

The results of this research will help reduce the build-up of corrosion in Saudi Arabia’s natural gas pipelines, helping the country fully leverage its natural gas reserves, which provides a quarter of Saudi Arabia’s energy resources and over 95% of the feedstock used to produce the country’s petrochemical products.

Dr. Jouiad’s research findings can also be used to inform the sustainable construction of natural gas pipelines in the UAE – which currently uses natural gas to generate 98% of the country’s electricity through cogeneration power and desalination plants and uses considerable amounts of natural gas for enhanced oil recovery and steel manufacturing. The research is thus of great value in helping both Saudi Arabia and the UAE leverage their abundant natural gas reserves to produce natural gas in a sustainable, low-cost and energy-efficient way.