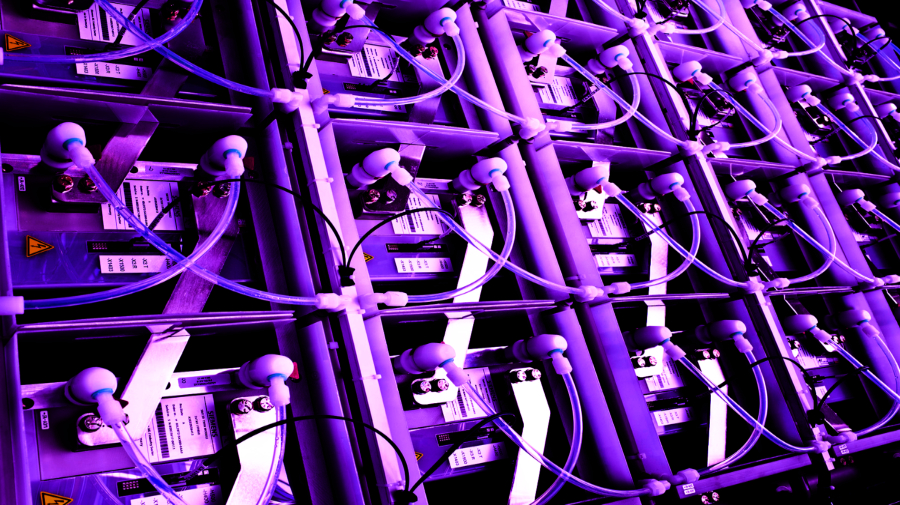 A Khalifa University research team has developed a new switching algorithm for modular multi-level converters (MMC) — a promising electrical power system that has the potential to benefit the clean energy and oil and gas sectors.

The team, led by Associate Professor Dr. Abdul Rahman Balanthi Beig with graduate students Safia Babikir Bashir and Yan Yan, have developed a new switching algorithm to improve the performance of MMC. They recently published a paper in the international journal ‘Electrical Power and Energy Systems’ on their research. The MMC is expected to facilitate major changes in the way next-generation power systems are connected and operated.

“With the emergence of multi-level converters, the whole concept of the way electricity is generated, transmitted and consumed is changing. Today efficiency is the key objective in the electrical energy sector. The more energy mankind requires, the more scientists and engineers have been tasked with the challenge of transferring power over long distances and connecting various types of power systems and grids in the most effective and efficient manner possible, to reduce losses and cost. The MMC has potential to solve some of these challenges, but itself had some unresolved issues that we have attempted to address to increase its voltage balancing and overall reliability,” Dr. Beig explained.

An MMC is a type of multi-level voltage-source converter that can convert electric power from high voltage direct current (HVDC) to high voltage alternating current (HVAC), and vice versa. The modularity of the MMC makes them relevant to many functions and industries that can benefit from their ability to control a voltage source without an isolated direct current (DC) bus voltage, which eliminates the need of an additional isolation transformer, making the system more compact, economical and efficient. MMCs are now the most rapidly growing type of voltage source converters and are used in medium voltage applications, like integrating wind generators or large solar plants to electrical grids.

Dispatching electrical energy in direct current (DC) form is economical and efficient when large amounts of power, approximately a few megawatts, is transferred over a long distance at very high voltages of about 600kV to 1600kV. This technology is known as High Voltage Direct Current (HVDC) transmission. HVDC was not sufficiently reliable, efficient and simple to operate until the multi-level voltage source converter (ML-VSC) system was invented in the early 21st century. With this enabling technology, the electric power generated from sources such as large photovoltaic farms and wind farms can be integrated easily into HVDC networks.

In comparison, the AC form of power is economical when a few hundred kilowatts of power is distributed to several consumers in an industrial or residential area, and when that power is distributed at different voltage levels. So with MMC, the existing vast AC network is still useful, as ML-VSC links the electrical energy from HVDC to AC networks. The ML-VSC can also transfer power from an AC network to a DC network and vice versa.

Multi-level converters based on the MMC configuration also offer modularity, which makes them the very attractive from the manufacturing and operational point of view. An MMC is a stack of several identical single phase converter units. The manufacturing industry has the advantage of repeatability where one type of small converter (known as a cell) is manufactured in a large number, allowing parallel production line.

In spite of the many MMC advantages, technicians have found some limitations due to differences in voltage across the cells and large circulation current in the converter power circuit due to this imbalance. This degrades the converter efficiency. Therefore, the Power Electronics and Sustainable Energy (PEASE) lab research team at KU has developed a new switching algorithm for MMC, which results in less cell voltage variation, thus reduced circulation current.

“We are working on developing a new switching algorithm that will eventually improve the performance of MMC and also working on optimizing the size of capacitor and arm inductors that are essential components of MMC. Another area of research is developing new control algorithms to connect these inverters between HVDC and AC networks,” Dr. Beig explained.

The team demonstrated the successful use of their algorithm to a MMC-based DC-to-AC converter connected to different types of AC grids. This work is published as a paper in the international journal ‘Electrical Power and Energy Systems’. The team is currently in the process of demonstrating the successful use of their algorithm for a MMC-based AC-to-DC converter and published their initial work in the IEEE Industry Applications Annual meeting and Conference (IEEE-IAS 2018) at Portland USA, which took place Sept 21-27, 2018.

Electrical engineering graduate students contributed to the project with the support from PEASE Lab engineer Saikrishna Kanukollu. Currently the team headed by Dr. Beig and electrical engineering graduate student Yan Yan has developed an experimental prototype of MMC. The next step is to develop another similar prototype and demonstrate the power transfer between two AC networks through and HVDC link.

Now Dr. Beig and other researchers at the PEASE lab are working on further developing the findings from the project and other related applications at Khalifa University’s newly launched Advanced Power and Energy Center.

“New MMC applications being developed include compact substations using power electronic transformers. One of the challenges is to keep these converters in operation without going out of control when large changes in the AC network takes place,” Dr. Beig explained.

Dr. Beig is also working with Professor Dr. Igor Boiko to develop self-tuning algorithms for these converters so that the converters continue to have stable operation under such conditions.

“This project has great promise for industry applications and further development. If the identified problems with MMC are addressed, then MMC based regenerative drives will become very popular and find applications in heavy industries like oil and gas, all electric ships and all electric aircraft, in addition to the renewable energy systems,” Dr. Beig concluded.