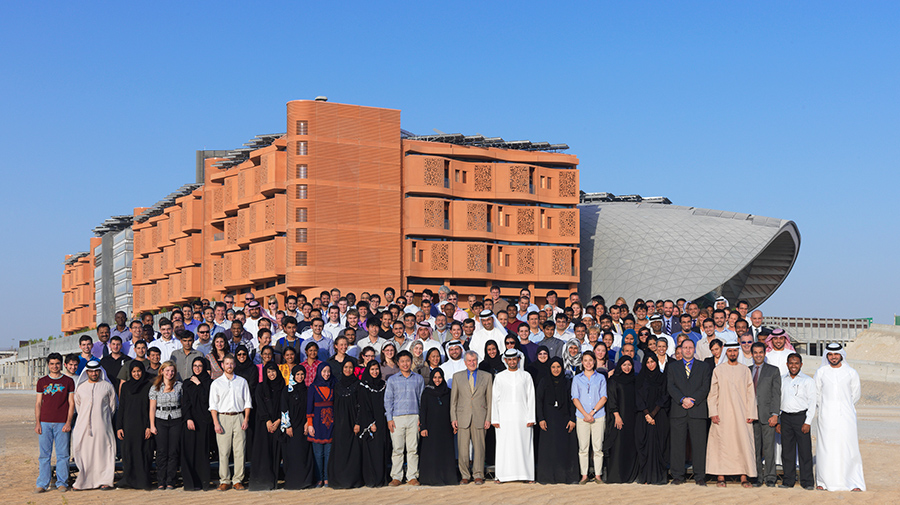 In the ten years since Masdar Institute (MI) was established through presidential decree in 2007, the research-focused graduate institute that recently became part of the new Khalifa University of Science and Technology, has steadily pursued its founding mandate to ‘support scientific research and technology in the emirate’ within Abu Dhabi and across the UAE, by evolving with the country’s rapidly developing national goals and needs.

The MI management has worked closely with the Massachusetts Institute of Technology (MIT) and the UAE government to develop a university that nurtures the innovation ecosystem required for the country’s targeted knowledge economy transformation. The resulting institute has set many precedents in its efforts to develop the intellectual and human capital required to fuel the country’s continuing progress and prosperity, both in the UAE and the region at large.

One obvious example of this focus are MI’s academic programs. When the Institute first began classes in 2009 it had just five degree programs. Today it has more than doubled that, with nine Master’s degree programs, a PhD in Interdisciplinary Engineering, a Practicing Professionals Program, and the region’s first Master’s concentration in space systems and technology. This rollout of academic programs has reflected the UAE’s evolving economic strategies and needs.

For example, MI launched the UAE’s first Master’s in Microsystems in 2010 following the establishment of Mubadala’s semiconductor-focused Advanced Technology Investment Company (ATIC) in 2008, which later rebranded as Mubadala Technology. The program’s research focus was then strengthened with the creation of the ATIC-SRC Center of Excellence for Energy Efficient Electronic Systems (ACE4S) in 2013, followed by the launch of the Institute Center for Microsystems (iMicro) in 2014. This focus on semiconductors resulted in student Aaesha Al Nuaimi becoming the first UAE national to fabricate thin-film crystalline Si-solar cells in the MI cleanroom in 2012, and fellow Emirati student Mejd Alsari Almheiri becoming the first to fabricate a polymer-based organic photovoltaic solar cell (OPV) in the UAE a year later.

The launch of MI’s latest academic offering, its Master’s concentration in space systems and technology, is a continuation of that effort to support the UAE’s national goals and needs through world-class academics and research. The concentration was developed in response to the UAE’s goal of establishing of becoming the first Arab nation to send an unmanned probe to Mars in 2020 and the targeted development of its aerospace sectors. As such, the concentration aims to educate some of the 150 Emirati scientists and engineers estimated to be required to complete the mission. The concentration was developed in collaboration with UAE satellite operator Yahsat and Orbital ATK and includes student-led design of a mini-satellite, called a CubeSat. The upcoming MI Commencement 2017 in May will introduce the first graduates of the space concentration to the UAE, many of whom will collect their diplomas and race off to join the country’s growing aerospace sector.

Ensuring that Masdar Institute’s education empowers and enriches the UAE’s people so that they can go on to become the country’s new value-added product in its post-oil future, as targeted in the Abu Dhabi Economic Vision 2030 and UAE Vision 2021, has always been a central focus of the Institute. That is why the Institute has targeted increasing enrollment of UAE Nationals, which has grown from 11% in its inaugural student intake in 2009, to reach 52% in 2017.

“Masdar Institute was always about giving the best back to the UAE. And for us, that has meant ensuring that we are also educating the UAE’s people to enhance the country’s resources. Thankfully, we have always managed to find ambitious, talented and driven Emirati women and men to take on the challenge. We count among our alumni some of the country’s pioneering Emirati scientists and engineers,” said Dr. Behjat Al Yousuf, Interim Provost, MI.

MI’s student numbers also tell a story of dedication to female empowerment, capitalizing on the talent and determination demonstrated by women in the UAE. Emirati women are estimated to make up 60-70% of graduates in the UAE public sector and 59% of the UAE National workforce. This high level of educational achievement and workforce participation reveals the important role Emirati women are playing and will continue to play in the UAE. Ensuring that the education they achieve is of high quality and relevant to the country’s targeted sectors will ensure that their economic potential is fully leveraged.

Masdar Institute’s general student population is 51% female, and among the UAE National student body the number is 68%. These figures are particularly impressive given traditionally low enrollment and graduation rates for women in the sciences and engineering disciplines. For instance, the US average for enrollment of women in engineering graduate programs is a mere 23.1%.

“MI has continued with the legacy of Sheikh Zayed to meaningfully integrate the UAE’s women into the activities of the country. That is why we proactively engage in outreach to female students and faculty, and are proud to have a heavily female senior management,” revealed Dr. Lamya N. Fawwaz, Interim Vice President for Communications, Khalifa University of Science and Technology.

One student who embodies MI’s commitment to select and develop the best female talent is Nazek El-Atab, who is set to graduate with her PhD in May. El-Atab received the L’Oreal-Unesco For Women in Science Middle East Fellowship in 2015 for her thesis research, which is focused on lowering power consumption in nano-memory devices, and has followed up that honor with another this year. She was recently awarded the 2017 L’Oréal-UNESCO For Women in Science (FWIS) Rising Talent Award for the African and Arab region in honor of her outstanding potential and contribution to the creation of innovative solutions in field of research.

Through the collaborative research and academic activities and local enrollment taking place at MI, the Institute intends to advance the UAE’s strategic national goals. This includes development of a strong diversified economy, balancing economic growth with environmental sustainability, developing an energy master plan for a diverse energy supply, and ensuring sustainable energy and water supply.

One collaborative research project that is already working to help achieve the goal of sustainable water supply is the UAE’s first renewable-energy powered desalination facility in Ghantoot, to which MI has been a key contributor. The goal of the project is to have full-scale renewable energy powered desalination operational in Abu Dhabi by 2020, for which it has integrated a Renewable Energy Desalination Pilot Plant. One of the five projects in the plant is a collaboration between Masdar, MI and Laborelec and Suez Environment, to research the feasibility of a reverse osmosis (RO) desalination plant using innovative desalination and powered by solar technologies.

Corporations have also recognized the value that Masdar Institute’s cutting-edge research can offer them to achieve their own performance goals. One such collaboration that has rolled out with great success is the Etihad fog detection system. MI’s researchers developed a software system for Etihad Airways that uses satellite data and other information to allow the airline to know in advance when fog events are likely to impact the Abu Dhabi Airport, thus helping officials to plan ahead to minimize disruption.

“This project will allow Etihad to detect in advance the type of fog incidents that caused significant and costly disruptions in 2014-15, and allow for planning to mitigate those disruptions. The system developed by MI researchers benefits not only Etihad, but the international community that vitally depends on Abu Dhabi as an air transportation hub,” Dr. Al Yousuf explained.

The 585 graduates MI has produced in its eight years of academic operations are a measure of the value and impact the Institute has had on the UAE and the wider world. Over 90% of the Institute’s graduates are employed or pursuing further education and some have already become pioneering innovators and celebrated scientists, carrying forward the ripples of the Institute’s impact.

MI’s first female PhD graduate Dr. Aamena Ali Alshamsi defended the UAE’s first doctorate thesis in the field of data science and computational social science while the first overall PhD program graduate Dr. Faisal AlMarzooqi became the first UAE national to disclose an invention for a novel technology to enhance desalination techniques using nanotechnology. Dr. Al Marzooqi, who joined Masdar Institute as an assistant professor following his graduation, has also worked with fellow alum and trailblazer Mejd Alsari Almheiri, a Class of 2014 MSc in Microsystems Engineering graduate and current PhD student at Cambridge University, to establish the first UAE Synchrotron Users Association. The group they established aims to bring together the UAE’s scientists and synchrotron experts to explore how fields of relevance to the UAE can be advanced through synchrotron science and to develop the synchrotron memberships and associations that will provide access to the limited and highly restricted research facilities.

Some of MI’s international alumni have also helped take the Institute’s impact far beyond the UAE’s borders. Class of 2011 graduate Laura Stupin is applying the skills she developed at MI to provide an innovative sanitation, health and renewable energy solution in Africa. She is a Senior Process Engineer at an organization called Pivot, which delivers city-scale sanitation solutions to low-income communities while providing access to renewable energy. Pivot coverts human waste into a solid fuel that is sold to industry for use in cement and brick factories to burn in their furnaces, which has contributed to reduced contamination of groundwater supplies and resulting diseases and malnutrition.

The Institute is now gearing up for its seventh commencement in May, which will be its last stand-alone graduation. Its graduates, and the work they go on to do, will further expand the Institute’s impact on the UAE and the world at large, advancing sustainability and innovative problem-solving. And with the announcement of MI’s merger with two other leading technical universities — the Petroleum Institute and the Khalifa University of Science, Technology and Research — to create the Khalifa University of Science and Technology as a unified world-class, research-intensive institution, MI is planning for its next ten years of expansion, growth and responsive evolution. The new university will carry forward and enrich MI’s founding aim to support Abu Dhabi and the wider UAE’s transformation into an innovative knowledge economy, empowering the country’s people to become high-tech innovators, scientists, entrepreneurs and engineers.