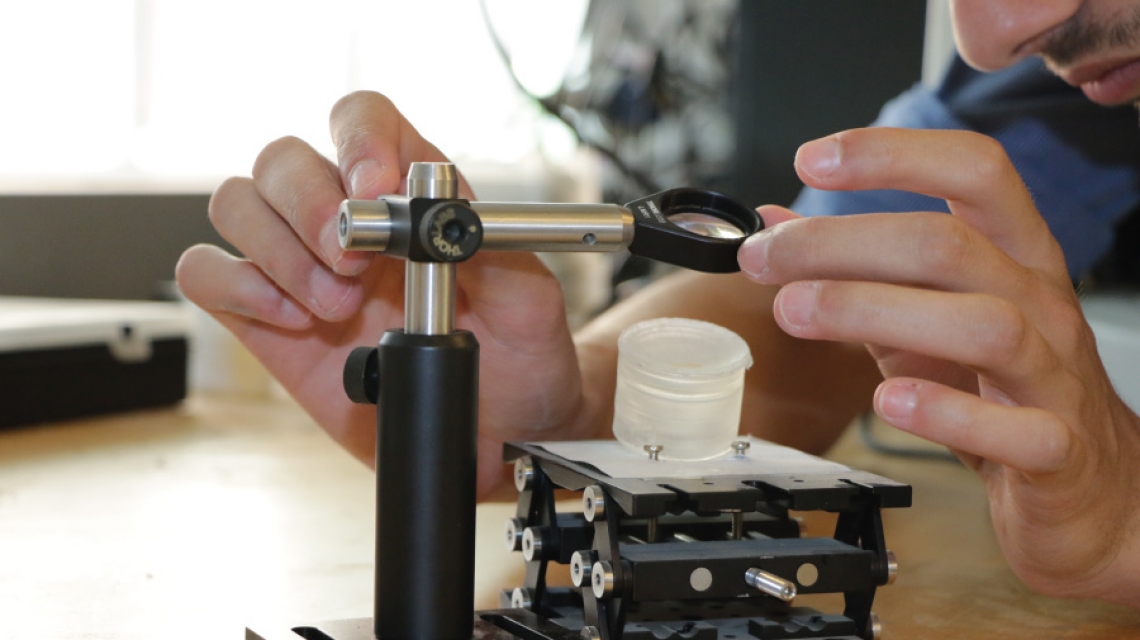 Concentrating photovoltaics, or CPV, while one of the most efficient solar technologies on the market is also one of the most expensive. Current CPV technologies have a large physical footprint and require expensive and heavy mechanical systems to track the sun throughout the day.  Leveraging the key strengths of CPV – namely, its ability to concentrate sunlight onto high-efficient solar cells – in a much smaller system, researchers at Masdar Institute are developing a novel, low-cost CPV system that has the potential to be placed on rooftops.

“Traditional CPV systems rotate solar panels to face the sun using a mechanical tracker that is both expensive and too big to put on rooftops,” explained Masdar Institute Research Engineer Harry Apostoleris, whose Master’s thesis focused on this work.

“We are trying to accomplish this tracking through a flat system that does not move, by changing only the optical properties of the collector, not its physical orientation,” he added.

Apostoleris is lead author of a paper published on this research earlier this month in the journal Nature Energy with his supervisor, Dr. Matteo Chiesa, Associate Professor of Mechanical and Materials Science Engineering, Masdar Institute, and Dr. Marco Stefancich, Researcher at the National Research Center in Parma, Italy. Their research was awarded an MIT Deshpande Center research grant for its innovative potential.

The team’s proposed sun-tracking system acts like a box – made of an opaque, waxy material made of a silicone and paraffin composite – that employs an optical “hole” on its surface to track the sun’s path throughout the day. As the sun’s infrared and visible light enters the hole on the box’s surface, the reflected rays are blocked when they try to escape and are utilized by high-efficiency PV cells.

A lens is placed in front of the box, concentrating and directing sunlight onto a small area of the transparency-switching material, creating the optical ‘hole’ or transparent area. As the sun moves, causing the location of the focal spot to vary, the hole moves so that light can continually enter the device.

Traditional CPV systems reach high light-to-electricity conversion efficiencies – 30% or more – by concentrating direct sunlight onto multi-junction solar cells. These bulky systems track the sun’s path throughout the day with expensive and heavy mechanical systems that rotate as the sun moves.

Though, according to a report by IHS Technology, CPV installations have increased by 37% this year, their high costs and weight make them suitable only for utility-scale PV in regions with very clear skies, rendering them essentially absent from the fast-growing distributed PV market.

The main form of distributed PV, rooftop solar panels, are usually made of silicon or thin-film semiconductor cells with module efficiencies between 15-20% and are dominating the solar market. In the United States, more rooftop solar panels were installed in the first quarter of this year than natural gas power plants.

Because CPV efficiencies are much higher than flat solar panels commonly used for distributed applications, there is growing interest to make CPV systems accessible to the distributed market.

“The only thing holding CPV back from widespread residential use is its large size and high upfront costs,” explained Dr. Chiesa. “Our CPV system is compact, stationary and made of low-cost materials – which are key requirements for distributed PVs.”

Dr. Chiesa and Apostoleris have filed a patent for their Proof-of-Concept (PoC) sun-tracking system, which is the first step towards commercialization of the technology.