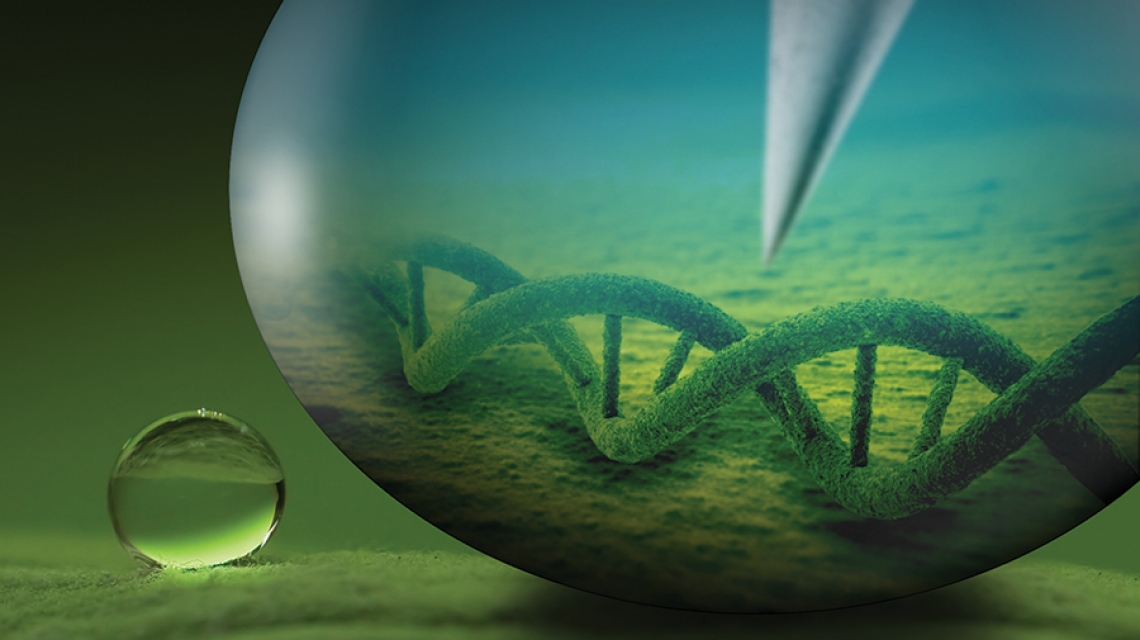 A novel imaging technique that leverages atomic force microscopy (AFM) to accurately measure the chemical diversity within a DNA molecule has been developed by a research team from Masdar Institute (MI) and the Petroleum Institute (PI).

Dr. Matteo Chiesa, Professor of Mechanical and Materials Engineering at Masdar Institute, shared the process at the first New York University (NYU) Biomedical and Biosystems Conference, which was held from 9-11 April at NYU Abu Dhabi (NYUAD). Dr. Chiesa, MI intern Mashael Alshehhi and PI professor Dr. Saeed Alhassan discovered two critical experimental parameters for the use of AFM to image accurately a biomolecule’s surface, which could in turn accelerate the development of critical biomedical technologies.

Until now, determining the exact topography of a biomolecule’s surface, such as its height or arrangement of its parts, has been difficult to measure with certainty. AFM – which is an advanced tool to image and characterize structures as small as a fraction of a nanometer, or a million times smaller than the width of a human hair – was only able to interpret “apparent height” as opposed to “true height.”

The inability to determine the precise topography of a biomolecule limits bioengineers’ ability to develop important biomedical technologies. For example, accurate imaging of a biomolecule’s surface, such as DNA, would enable scientists to engineer other biomolecules, like proteins, with the precise structure and morphology required to latch onto the DNA, where they could then administer drugs or provide the DNA with a set of instructions to carry out a desired task.

Dr. Chiesa’s team has brought the scientific community closer towards developing such biomedical breakthroughs through their advanced imaging process that leverages multifrequency AFM to determine chemical heterogeneity (chemical diversity) and height of a DNA molecule. The team described the imaging process in a paper published earlier this year in the journal Physical Chemistry Chemical Physics. The paper made the front cover of the journal’s 28 April 2017 issue.

In the course of their research, the team investigated the impact of various experimental parameters that must be considered when imaging a biomolecule with AFM, including the ideal AFM operational mode, the role of the substrate used, and the ideal imaging timeline.

The first finding was the appropriate AFM operational mode for biomolecule imaging. In a typical AFM experiment, an ultrafine probe needle, scans over a surface while tracing its topography to produce an image based on the forces the tip experiences as it interacts with molecules or atoms on the surface. The cantilever, which is the arm controlling the microscope’s probing needle, oscillates at a single frequency across the material’s surface, producing an atomic-scale map of the material’s topography.

In this study, the team explored a new AFM operation, called bimodal AFM mode, which involves oscillating the cantilever with two separate frequencies simultaneously. This multifrequency approach yielded images of the DNA’s surface with higher compositional resolution, sensitivity and throughput, which in turn led the team to better understand how a key experimental parameter affects how a biomolecule’s surface characteristics are altered over time.

THE ROLE OF THE SUBSTRATE AND TIME

“We felt that while advances in hardware, software, physical models and interpretation of data in the AFM field are drastically improving, robust characterization of the substrate is a key parameter in the experimental set-up that requires deeper investigation,” Dr. Chiesa explained.

The team found that the crystal mica substrate that is preferred for AFM due to its atomically flat and smooth surface, which is transparent and free from scratches and contamination, does not retain its suitability as a constant over time.

To determine how the substrate affects the scanning probe microscope’s ability to measure a DNA molecule’s topography, the team investigated the impact that a mica substrate’s age – measured as the amount of time passed since the mica was freshly cleaved – has on the DNA molecule. They compared measurements of DNA height on the mica substrate that was freshly cleaved, with DNA measurements taken from a mica substrate that sat out for 48 hours. This led to the third aspect of the AFM technique discovery – importance of timeline.

The rapid accumulation of pollutants over the substrate is a phenomenon the team termed “adsorption.” As the substrate becomes increasingly contaminated by adsorbates over time, the topographical measurements of the DNA molecule become difficult to obtain. This happens because AFM relies on physically feeling the atomic forces between the microscope’s needle and the material’s surface. As more materials, or adsorbates, build up over the DNA molecule over time as the substrate is exposed to air, the adsorbates prevent the microscope’s needle from feeling the DNA.

In their paper, Dr. Chiesa’s team reveals their findings that mica substrates render biomolecules essentially invisible up to 48 hours after it has been cleaved, exposing the critically important role the substrate plays in obtaining accurate and reliable topographical data of a biomolecule’s surface.

“We found that as the substrate is exposed to air over the course of 48 hours, a layer of water molecules, potassium ions and carbonates build up over the substrate, rendering the molecule of DNA invisible to the AFM,” Alshehhi explained. “Thus, we asserted that imaging of the DNA should be carried out as soon as possible after the mica substrate is cleaved and the DNA sample is prepared.”

The team thus demonstrated that the successful imaging of a biomolecule using AFM not only depends on the biomolecule’s properties, the preparation of the biomolecule, or the cantilever calibration, but also on the exposure time of the substrate to the air environment. This information will enhance scientists’ ability to collect accurate, reliable data on biomolecules and other materials studied with atomic force microscopes in the open-air environment, which will in turn enrich scientific knowledge of biomolecule characteristics.

“Until now, scientists did not know how to account for the aging of the substrate and sample in the air due to adsorption,” Dr. Chiesa said. “To get around the challenge of imaging biomolecules in air environments, most AFM studies of biomolecules are conducted in water, as water keeps the sample stable. But our bimodal AFM scheme coupled with our findings on the role of the aging substrate enabled us to develop a standardized mode of operation that, if applied by the wider AFM community, will lead to a significant compilation of information on biomolecules.”

With the newfound realization that accurate height measurements of DNA molecules can be determined with multifrequency AFM under the condition that a freshly cleaved mica substrate is used, Dr. Chiesa and his team hopes their findings generate a wave of new research of biomolecules and other materials using their imaging approach that will bolster the development of biotechnologies needed to improve human health and well-being.