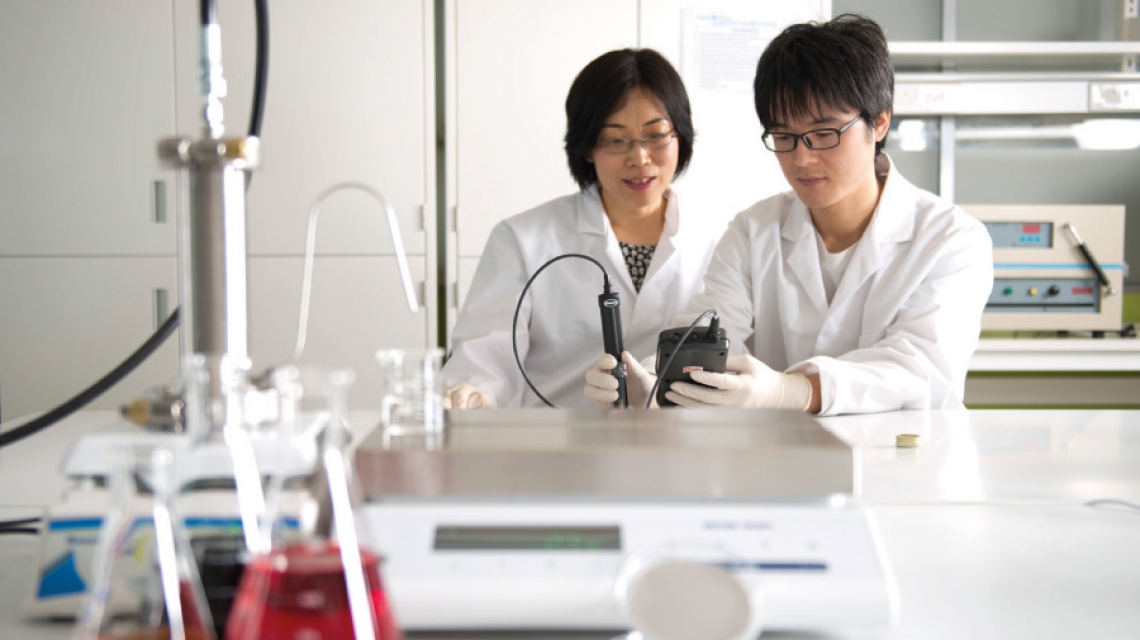 Innovative research that uses advanced materials to turn saline water into freshwater in an energy-efficient way was presented by Masdar Institute’s Dr. Linda Zou, Professor of Chemical and Environmental Engineering at the 2015 International Conference on Capacitive Deionization and Electrosorption held in Germany.

Dr. Zou was invited to present her research in capacitive deionization (CDI), which uses an electrical charge separation, rather than chemicals or high-pressure membrane systems to remove salt from water. Her work has received a lot of attention because it capitalizes on the transformative potential of materials science by enhancing the materials in the electrodes and membranes – the two critical components of a CDI system – to improve the salt removal capabilities of CDI.

The Beijing-native professor’s participation in the leading-edge conference in Germany demonstrates Masdar Institute’s growing international role in the development of technologies for water treatment, production and conservation, which is strongly felt in the Gulf region and in many industrialized nations. Water and energy research driven by disruptive advanced materials and systems are at the core of Masdar Institute’s research agenda.

Water scarcity is so severe a challenge in many parts of the world that Masdar Institute recently signed a faculty and student exchange agreement with the world’s leading engineering institution, China’s Tsinghua University, which looks to advance education and research in the fields of membrane and thermal desalination and water treatment, among a number of sectors of relevance to China and the UAE.

With recent efforts focused on improving the ion-exchange membrane component of CDI, Dr. Zou was eager to share her new findings, which were published recently in the journal Electrochimica Acta.

An effective ion-exchange membrane should be highly conductive so that it can transport the charged salt ions to the corresponding electrodes, which is key to the process of removing salt from seawater. In this way, the membrane acts as a selective barrier, only allowing the positive ions through to the anode and the negative ions to the cathode.

By applying nano-sheets of graphene to the polymer-based ion-exchange membrane, Dr. Zou was able to enhance the membrane’s electrical conductivity and ion exchange capacity, greatly improving the CDI’s ability to remove salt from the water.

In her research, Dr. Zou found that the ion-exchange membrane plays an essential ion-selective role, greatly improving the adsorption of salt by activated carbon-based electrodes.

“The ion-exchange membranes help to minimize the unwanted co-ion effect, which occurs when charged ions do not get adsorbed by the electrodes. The conductive membrane helps to sort the ions and allows only oppositely charged ions to pass through to the electrodes, thus greatly improving the salt-removal efficiency of the CDI system,” Dr. Zou explained.

Dr. Zou leads several research projects at Masdar Institute in the area of CDI. One such project is being sponsored by Veolia – a French environmental resource management company – and aims to investigate the feasibility of using CDI to replace the second stage of reverse osmosis (RO) in an RO seawater desalination plant.

Novel water-related research projects and initiatives like these serve to position Masdar Institute as a forerunner in water desalination technologies through the work of faculty like Dr. Zou and her research team.