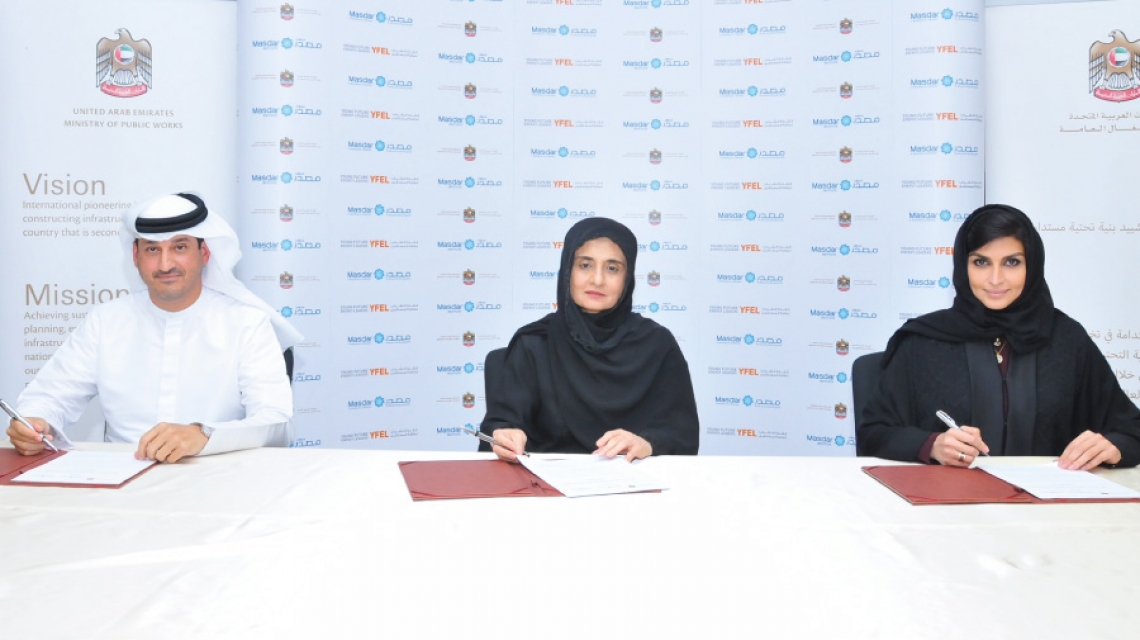 The project was driven by eight members of the 2011-2012 YFEL program, who worked in close partnership with Masdar Special Projects. The installation, commissioned by the UAE’s Ministry of Public Works, will be the largest renewable energy project in the UAE to power a hospital. It will use polycrystalline solar modules manufactured in the emirate of Fujairah to deliver solar energy to the Ras Al Khaimah-based hospital.

H.E. Eng. Zahra Al Aboudi, Under-Secretary of the Ministry of Public Works, stressed on the role of such partnerships in improving efficiency, increasing employment, enhancing development and implementation of the UAE’s infrastructure, as well as the exchange of experience, knowledge, data and resources among all partners. She added that this memorandum of cooperation helps support the sustainability ecosystem and green buildings, which Ministry of Public Works remains committed to. This is also key to achieving the objectives under the UAE 2021 Vision and the national agenda, she said and commended the Emirati youth who were behind this project.

H.E Eng. Al Aboudi pointed out that such partnerships come from Ministry of Public Works’ commitment to lay down the foundations for the strategic cooperation between the ministry and the various government agencies, including Masdar City and Masdar Institute, and to benefit from each other’s expertise in sustainability to achieve synergy.

Dr. Ahmad Belhoul, CEO of Masdar, said: “We are pleased to cooperate with the Ministry of Public Works by providing this hospital with a renewable energy source of electricity. This project is yet another example of Masdar stimulating and supporting innovation together with its partners as we continue to celebrate people and projects during UAE Innovation Week. This project demonstrates the viability of renewable energy as a source of electricity as well as a growth market opportunity for the UAE. Using solar panels manufactured in Fujairah to power the new Rashid Abdullah Omran Hospital, the UAE is taking strides to address energy security while simultaneously creating economic growth in new sectors.”

For the YFEL team, its completion is a testament to the collective efforts of its members. It also demonstrates the positive impact that the YFEL program has on its members and the networking platform that it provides during the annual World Future Energy Summit (WFES), held as part of the Abu Dhabi Sustainability Week.

Dr. Behjat Al Yousuf, Interim Provost of Masdar Institute said: “The YFEL members’ initiative to help bring solar energy to a UAE hospital is a wonderful example of the kind of impact and inspiration this Masdar Institute outreach program hopes to have on its participants. They have taken what they learned through their YFEL experience and used it to bring the benefits of renewable energy to the Rashid Abdullah Omran Hospital, which will now enjoy savings of AED267,300 per year and reduced greenhouse gas emissions by 700 tons per year.”

The YFEL team members were involved in identifying potential suitable sites, conducting viability studies, obtaining approvals, assisting in timely completion, tendering for a contractor, before testing and handing over the completed project.

Zainab Abdul Rahim Al Ali, Program Manager, YFEL, explained: “The RAK hospital project was a great team effort. For us, the close partnership and commitment to tackling the various challenges that came up along the way added to our collective breadth of experience. Even seasoned professionals find new ways to learn when working with new colleagues through YFEL.”

A Masdar Institute outreach program, YFEL offers young professionals and students from the UAE and abroad an opportunity to become more engaged in finding solutions to two of the world’s biggest challenges – achieving greater energy efficiency and tackling climate change. It also brings young professionals closer to government representatives, business leaders and other organizations active in the area of alternative energy and sustainability.

The solar panels are spread across the rooftop of the 82-bed maternity and children’s hospital, and the car park shading system.

The solar PV installation is the latest success for Masdar Special Projects, which launched renewable energy installations in Mauritania, Afghanistan, and the Seychelles last year. Masdar’s increased involvement in clean energy projects worldwide as well as within the UAE, is a key element of Abu Dhabi’s strategy to further diversify its investments beyond hydrocarbons while simultaneously boosting industrial growth domestically.