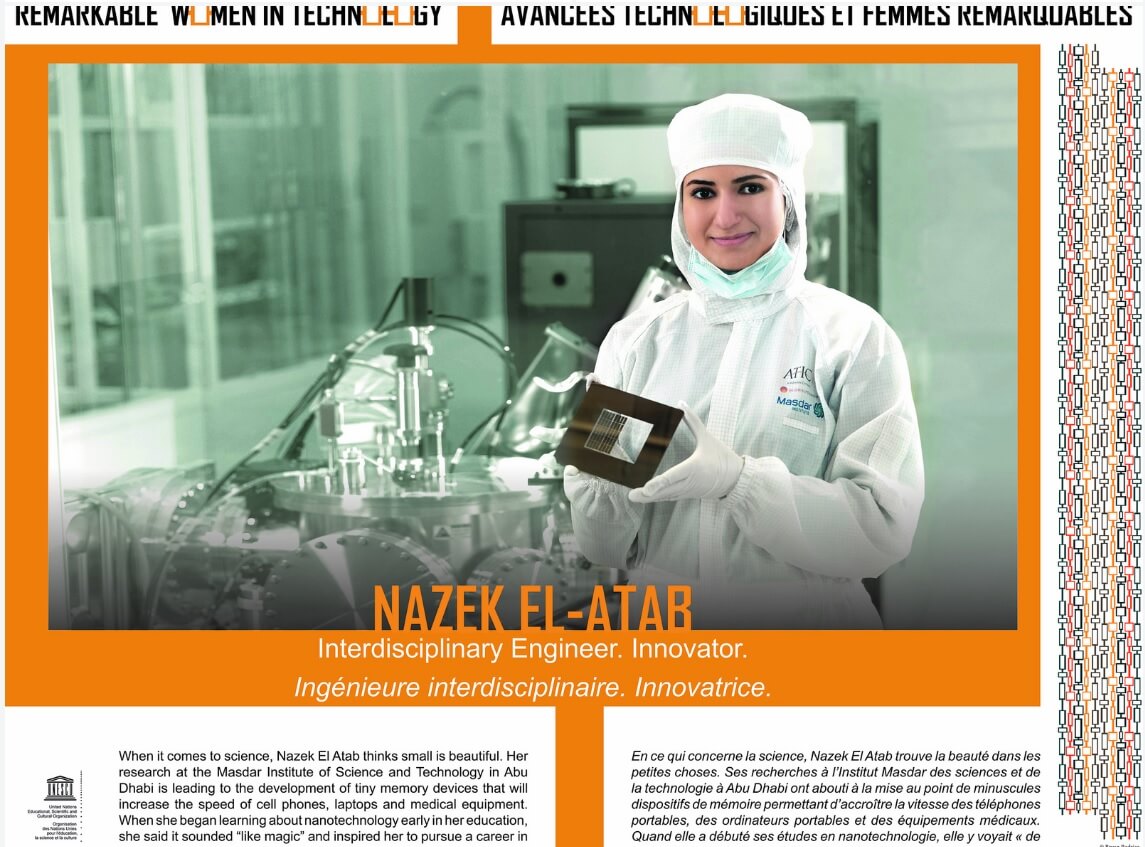 The research works of Dr Nazek El-Atab, an alumni of Khalifa University’s Masdar Institute, is being featured at the 2019 UNESCO Remarkable Women in Technology Exhibition along with 22 other leading women contributors and innovators.

From quantum physicists to artificial intelligence experts, the exhibition celebrates 23 women in a wide range of technological fields, divided into three groups – pioneers, leaders and influencers. The portrait of Dr El-Atab’s work on nanomaterials-based memory devices was selected in the ‘Leaders’ group, and is being showcased in Paris until 31 March.

In its citation, UNESCO said the exhibition presents the portraits of 23 women who “have made significant contributions to one of the most impactful sectors of our time and made their mark in a field in which women are typically under-represented. Their career paths are an inspiration to women and girls all over the world to take the leap into impactful technology careers and use their skills for sustainable development.”

Dr El-Atab said she felt extremely honored to have been selected for the 2019 UNESCO ‘Remarkable Women in Technology Exhibition. She said: “It is absolutely delightful to receive recognition for my work. Also, by shedding more light on my research and profile in this exhibition, I hope that more women and girls will be motivated to work in STEM fields in which women are usually under-represented.”

She added: “Khalifa University’s Masdar Institute paved the way for my success by providing me with access to state-of-the-art laboratories and cleanroom facilities in addition to a  providing me with a strong technical background. Also, this would not have been possible without the support and guidance from my PhD advisor, Dr. Ammar Nayfeh.

Dr El-Atab’s faculty advisor Dr Ammar Nayfeh, Associate Professor, Department of Electrical and Computer Engineering, said: “I would like to congratulate Dr Nazek El-Atab on being selected for the UNESCO Remarkable Women in Technology Exhibition. She did remarkable research as a PhD student at Masdar Institute, now part of Khalifa University.  She has distinguished herself with scientific research and publication, and is a great ambassador for women in science. We are all proud of Dr El-Atab’s achievements.”

International honor is not new to Dr El-Atab, who was selected for the 2017 L’Oréal-UNESCO For Women in Science (FWIS) Rising Talent Award for the African and Arab region. She was among 15 international female researchers to have won the award, when she received €15,000 (AED58,700) for her research that focused on fabricating non-volatile, low-power memory devices with enhanced performance. The women were awarded for their contribution to quantum physics, physical sciences and astrophysics.

That year, His Excellency Michel Aoun, President of Lebanon, and His Excellency Saad Hariri, Prime Minister of Lebanon, honored Dr. El-Atab, for winning the 2017 L’Oréal-UNESCO For Women in Science (FWIS) Rising Talent Award for the African and Arab region.

Earlier Dr El-Atab was also one of the four recipients of the 2015 L’Oreal-UNESCO For Women in Science (FWIS) Middle East Fellowships, which included a €20,000 (AED78,500) grant towards her research. She had used part of the fellowship money to present her research at the IEEE Nanotechnology Conference in Japan in 2016. Dr El-Atab also used the monetary award to conduct research at Stanford University, US.

Dr El-Atab is looking forward to become a successful faculty, working on impactful research projects related to futuristic electronics, contributing to the society, while inspiring and encouraging more women to pursue careers in STEM areas.