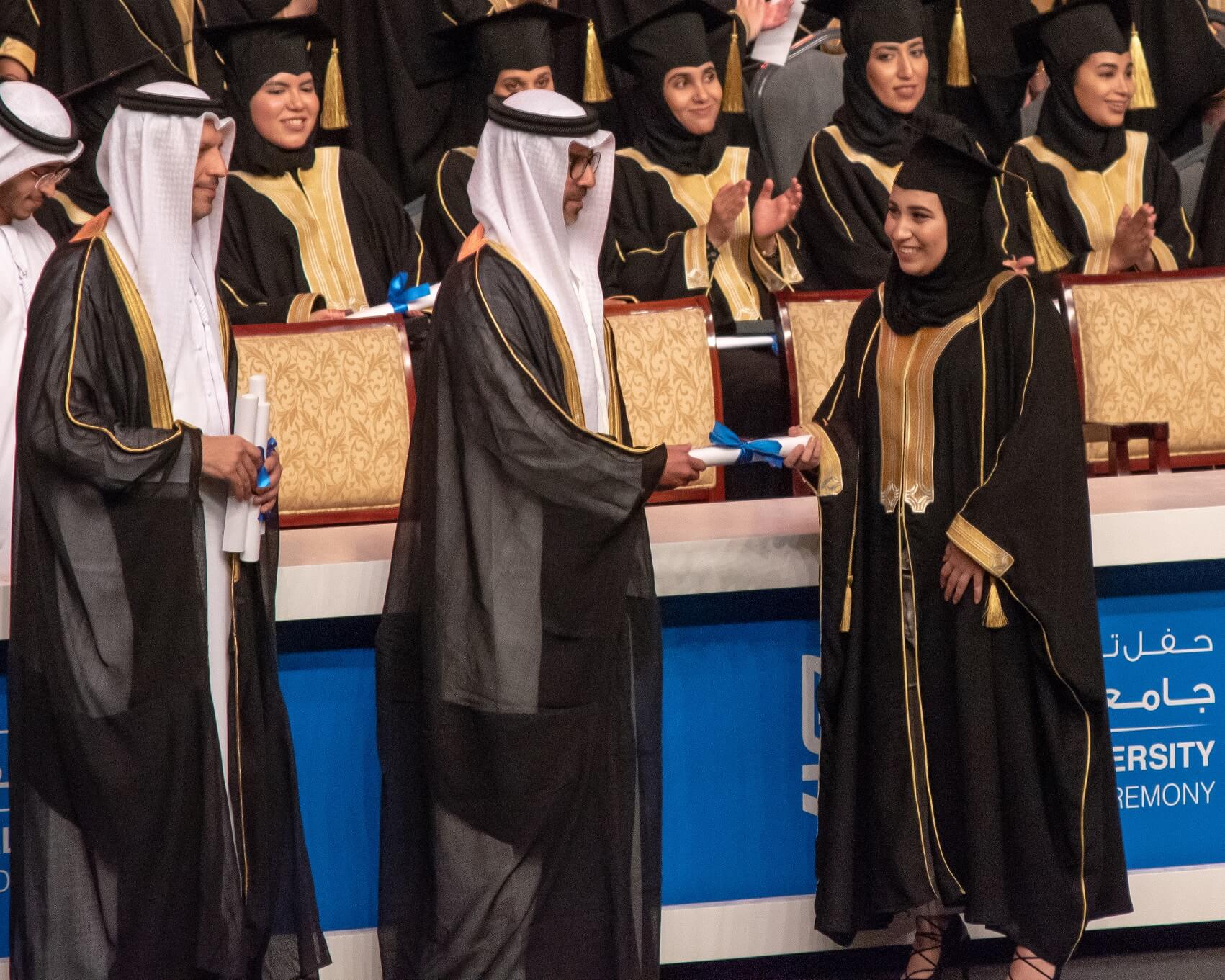 When Nada Wael Samir Elsokkary walked among the 285 PhD, Master’s and bachelor students as part of the Class of 2019 Graduation ceremony, she had reason to be proud. She was the first student to graduate with a BSc in Applied Mathematics and Statistics (AMST) from Khalifa University.

However, this graduation milestone is not all. Elsokkary appeared on the Khalifa University President’s List in seven out of nine semesters, completing the AMST program with a Cumulative GPA of 3.82 and an award of ‘Excellent with Highest Honour’. She was also the only undergraduate presenter at the Quantum Communication and Information Technology workshop during the IEEE Globecom Conference held in Abu Dhabi in December 2018, where she won accolades from experts in the field of quantum technologies for her technical work and clarity of presentation.

Dr David Sheehan, Dean, College of Arts & Sciences, Khalifa University, said: “Congratulations to Nada Elsokkary who has become the first B.Sc. graduate from Khalifa University’s Applied Mathematics and Statistics program. Her achievements reflect the quality of knowledge that is imparted to students of this program and across other undergraduate, graduate and PhD programs at our university. It is this sharing of knowledge in inter-disciplinary streams that makes us one of the top-ranking institutions in the region. I wish Nada the best and I am sure she will continue to excel in all her endeavors.”

A jubilant Elsokkary said: “When I think about the journey I took to get here, I am overjoyed and inspired to keep following my passion and use it to create some meaning in my life. I am beyond grateful for the opportunity that Khalifa University has given me and the many doors it has opened up. I truly look forward to representing Khalifa University as an alumnus in my future endeavors and achievements.”

Elsokkary, who had to change schools seven times in three different continents by the time she was 12 years old, declared the AMST program as her major at the commencement of her sophomore year because of her sheer love and enthusiasm for Mathematics.

She said: “Changes during my childhood were never easy, but I found much comfort and fascination in Mathematics which seemed to be the only constant – a universal language. As I got older, I noticed how thrilling it was for me to solve math problems and study proofs. I did not realize it at that time, but mathematical reasoning was shaping my personality, my thoughts, and my decisions. Thus, when it was time to choose what I wanted to learn as an undergraduate, Mathematics had to be it!”

Of course, she had to overcome many who attempted to dissuade her from taking up Applied Mathematics and Statistics major. She added: “Completing this degree was an uphill battle against misconceptions and the difficulties of being the first and only person taking the courses. There were many times when I felt like a leader and at other times felt so dejected, but my certainty that this was the right decision never wavered.”

The B.Sc. in Applied Mathematics and Statistics program was the first non-engineering undergraduate degree to be offered by Khalifa University, and it has shown steady growth in enrollment over the last four years. At present the total enrollment in the program is 59 students, of whom 44 are scholarship students supported by the UAE Ministry of Education on the ‘Future Teachers Program’.

Earlier, Elsokkary’s Senior Research Project, “Quantum Computational Methods in Financial Mathematics”, began in January 2017. She was tasked with gathering data from the Abu Dhabi Securities Exchange (ADSE) and calculating relevant statistics using Microsoft Excel. She then wrote a short program in MATLAB to optimize the Markowitz financial portfolio. The results were presented at the IEEE 21stAnnual High Performance Extreme Computing Conference (HPEC ’17) that was held from 12-14 September 2017 in Massachusetts, US, and were published in the proceedings.

Elsokkary pursued this research further for her year-long Senior Research Project – a required research activity in the final year of the AMST B.Sc.

Dr. Robert Bennell, Interim Associate Dean for Undergraduate Studies, College of Arts and Science, said: “For this extended project, Elsokkary was given two tasks – to work with our collaborators at Oak Ridge National Laboratory to develop a graphical-user-interface (GUI) for the D-wave quantum processor using the Python programming language. This GUI will enable Khalifa University to showcase applications of quantum computing technology to the local and regional scientific community and industry.”

Dr. Bennell added: “Secondly, Elsokkary had to explore the loading and compilation of programs in adiabatic quantum computers. It was these results that she presented at the IEEE Globecom Conference in Abu Dhabi, earning a name for herself and for Khalifa University.”

A truly delighted Elsokkary is looking ahead with even more enthusiasm. “I am pursuing a career in data science and analytics in order to utilize my mathematical background to make a societal contribution,” she added.