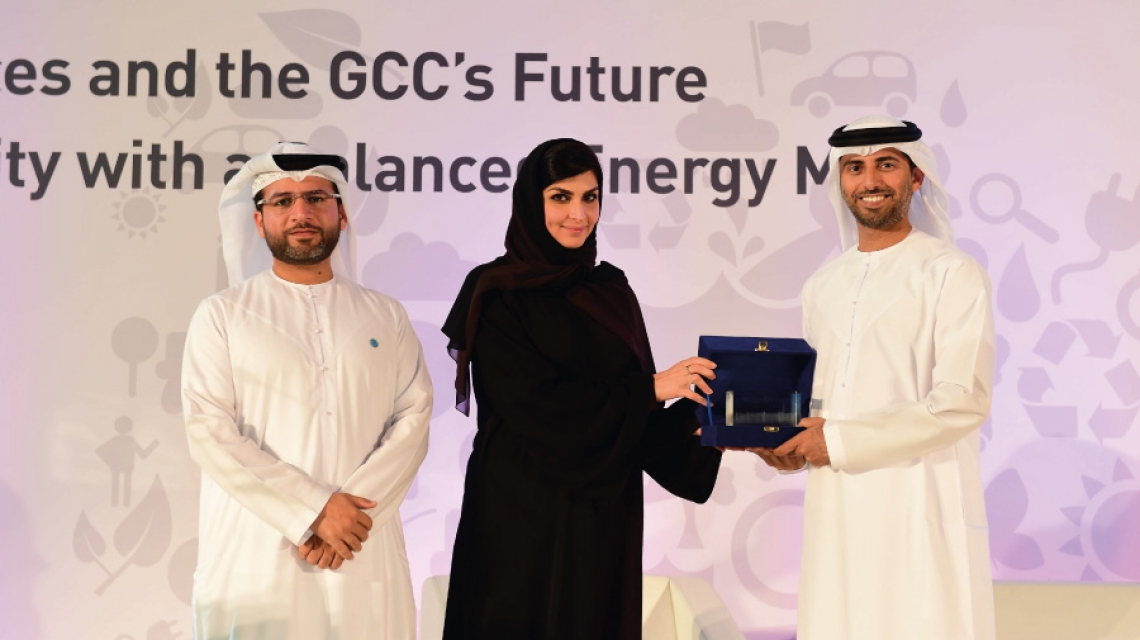 Masdar Institute of Science and Technology is making an important contribution to the UAE leadership’s efforts to increase the percentage of renewable energy in the country’s energy mix to 24% by 2021 through its research and outreach activities, according to His Excellency Suhail Al Mazrouei, UAE Minister of Energy.

The energy minister was speaking at the Distinguished Lecture Series hosted by Masdar Institute. His talk titled “Energy Security in the UAE” was attended by invited guests, faculty, students and staff of the Institute. The series invites government and business leaders to share their experience and expertise as part of the Institute’s efforts to support its critical thinkers and future leaders in driving breakthrough energy, water, and advanced materials innovations.

His Excellency Al Mazrouei commended Masdar Institute for its contribution to sustainability through its focus on research and development in clean energy, water and energy efficiency, and resource management, in addition to increased awareness of the value of sustainable clean technologies. He mentioned the Institute as being part of the UAE leadership’s proactive response to the need to diversify the UAE economy and meet the global need for sustainable technologies.

The minister also praised the UAE’s wise leadership for their visionary policies and energy reforms, which include deregulation of oil and gas subsidies last year and plans to reduce domestic utility subsidies.

His Excellency Al Mazrouei said: “The UAE energy reforms have come at the most relevant time when the crude oil prices are at historically low levels. The UAE’s progressive measures have been commended and other oil-producing countries are even looking to emulate our actions. Once again, the UAE has remained in the forefront, taking the right measures that reflect the far-sighted policies of the UAE leadership.”

He pointed out that an energy ministry study found substantial savings in energy and water consumption in schools, mosques and households. In energy alone, 10% savings in energy consumption could result in AED670 million savings per annum, while a 30% energy savings could boost this further to AED1.7 billion.

But achieving these savings will not be easy, the minister explained. The UAE must tackle increasing energy demand, higher per capita consumption, low tariff versus actual cost of electricity, close correlation between economic growth and consumption pattern, fluctuating oil prices, international agreements on carbon emission reductions, and limitations to renewable energy sources.

“The Ministry of Energy has finished drafting an Energy Efficiency Law for buildings, which would establish a database on buildings in the UAE including area, energy consumption, and occupancy. The law will help the UAE meet its energy mix target, which is also being furthered by new projects in solar, nuclear and wind energy,” the minister revealed.

The Washington-based Brookings Institution also hailed the UAE for the energy reforms and has forecast more decisions will further help the country with its economic growth.

The 2015 International Energy Agency’s (IEA) World Energy Outlook report has already revised the share of renewable energy in global power generation to more than 26% by 2020 from 22% in 2013 — a remarkable shift in a very limited period of time. By this time, the UAE is expected to have a right balance with emphasis on both the sources of energy. An International Renewable Energy Agency (IRENA) report says achieving a 36% share of renewable energy in the global energy mix by 2030 would increase global gross domestic product (GDP) by up to 1.1%, which works out to roughly US$ 1.3 trillion.

His Excellency Al Mazrouei also said that the energy ministry was developing its own forecast with expertise from international energy leaders. He added that such trend reports would be more pragmatic in helping the country move further towards progressive efficiency and an acceptable subsidy regime.