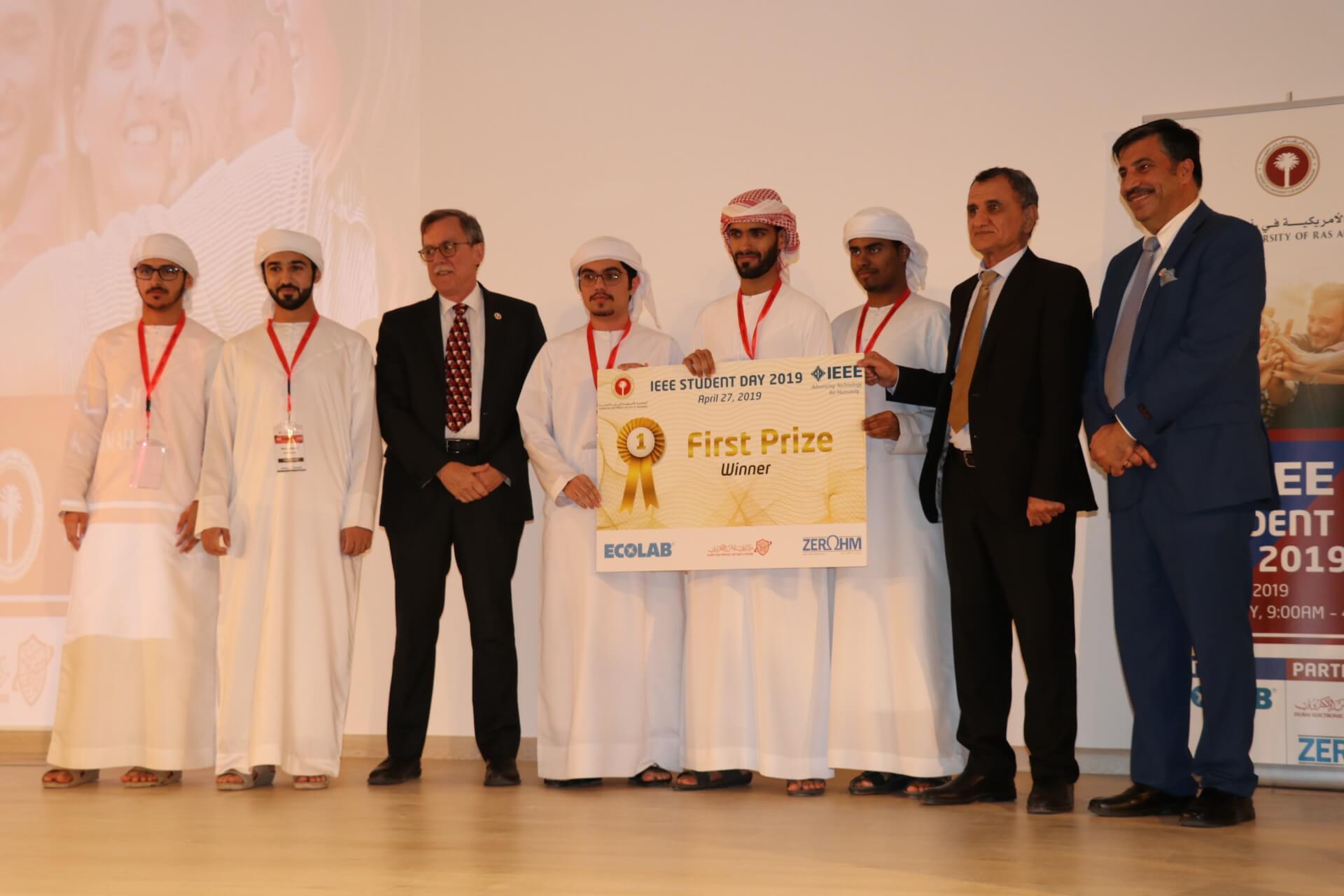 Two student teams from Khalifa University have won top honors for their Common Design Project (CDP) and Senior Design Project (Communications and Electronics) at the 14th IEEE UAE Student Day 2019 that was held on 27 April at the American University of Ras Al Khaimah in the UAE.

The ‘KU Drone’ CDP student team that won first place included Abdulla Alsamri, Mohamed Alhaj, Ahmed Bafakih, Mohammed Alketbi, and Majid Salman Alakberi. They were required to design and implement a vision-based control algorithm for a small unmanned aerial vehicle (UAV) or drone, with a maximum volume of 0.7m x 0.7m x 0.7m. The drone had to autonomously detect and locate a specified landing zone with the red square marker, out of
three randomly placed landing zones with different markers.

Similarly, the ‘High Speed Positioning’ SDP team that won first place in the Communications and Electronics category included Alya Al Zaabi, Wafaa Ahemd AlYammahi, Ruba Nasser and Ahmed Mehdi. Their project aims at positioning and tracking fast moving objects using two sources – the slower but accurate GPS, and the inertia sensors whose accuracy decays over
time. This project achieves the concept of sensor fusion through the ‘Kalman filter’ – an algorithm that uses a series of measurements to get fast and accurate position.

In the CDP category, the KU Drone had to be equipped with a camera for the detection of the landing zone, while the autonomous control system could use the images to detect the target, estimate its relative pose and suitably plan a navigation path to perform the landing maneuver.

The team felt that the image processing part for the ‘KU Drone’ was challenging as well as the speed of the drone and its rapid response. Another factor was stability, which was key to landing the drone close to the target.

For the SDP team, the project involved several electrical and computer engineering (ECE) multidisciplinary topics such as communication, electronics, programming, and control systems, which made this more challenging than other projects.

Team member Ahmed Mehdi said: “We were able to impress the judges when answering their questions. We definitely felt that a top three finish was inevitable after we preformed the presentation.”

Mehdi added: “Winning gives us a special kind of recognition to the efforts we have put in during the last few months and gives us a huge confidence boost. It is nice to be rewarded for our efforts.”

The CDP team felt that one of the key elements that gave them an edge over others was the guidance from their supervisor Associate Professor Dr. Mahmoud Meribout.

Abdulla Alsamri said: “With Dr. Meribout&#39;s guidance, we managed to choose the most suitable drone for such a challenge. Moreover, the decision was also based on our programing knowledge, as we chose a drone that matches our skills in C++. Moreover, our hard work and the huge amount of time we all put in this project eventually paid off.”

Alsamri added: “We feel proud after having this great opportunity to represent our university and win the top position – the rightful place for this university. We were determined to win and we have done it.”
News Writer
05 May 2019