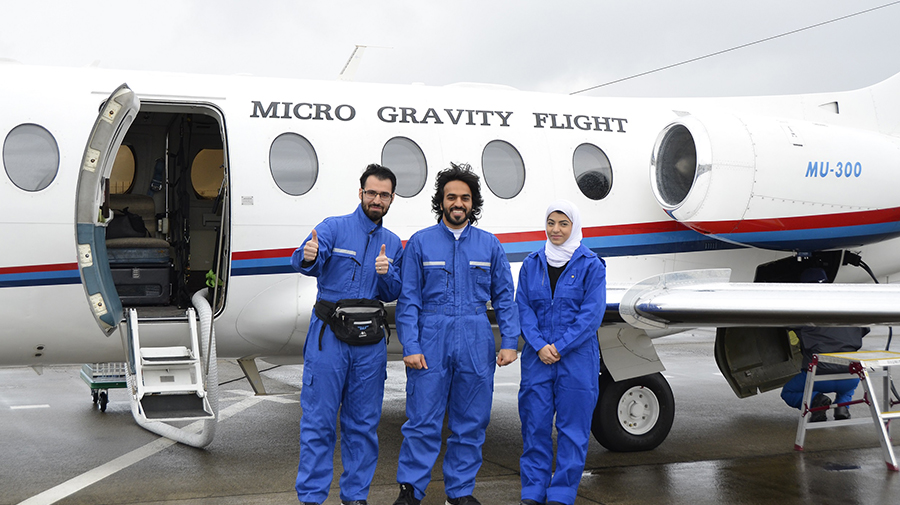 Masdar Institute’s Engineering Systems and Management students Ahmad Abdulkarim and Abdullah Sharif and Microsystems Engineering student Azza Al Bakr were given the training and experience by JAXA in collaboration with the UAE Space Agency as part of a joint UAE-Japan initiative to promote space education among young people in the UAE.

Ahmad said: “We would like to thank the UAE Space Agency and JAXA for this educational program and the unique opportunity to experience zero gravity. We look forward to engaging in such programs that will benefit the UAE society and the space sector. The program focused on the theory of rocket launch and its safety. We learned the basics of flight model rockets which we got to build and launch. We learned that satellites play an important role not only in interplanetary exploration but also in our daily lives.”

The UAE Space Agency-JAXA Ideathon competition was part of the Global Space Congress youth outreach program, where students were asked to come up with creative ideas on how to utilize space technology in order to solve social issues and benefit society in the UAE. The Masdar Institute team presented the idea on “A Smart Traffic Monitoring System”, which won them the trip to Japan. The prize included an opportunity to participate in space science experimentation training in Japan as well as a parabolic flight to experience zero gravity at the Chiba Institute of Technology (Tsudanuma Campus). The parabolic flight, which is used to train astronauts in zero-gravity, was a unique experience for the students.

The students’ Smart Traffic Monitoring System idea utilizes Global Positioning System (GPS) in a smart way. Through a smartphone application, it would suggest a certain route in order to prevent congestion. The route might require more time and longer distance. But if the user follows the suggested route, fuel credit will be accounted to the user based on how far the user has travelled. In this way the user will have have prevented traffic and saved money. The motivation is to solve traffic issues in the UAE especially during peak hours.

Dr. Saif Al Mheiri, Assistant Professor of Mechanical and Materials Engineering at Masdar Institute, who facilitated the student team’s participation in the competition, said: “Only through education, the development of a sustainable Emirati space program can become a reality. Educational activities such as the Ideathon Competition, parabolic flight and the CanSat program will certainly engage our young people in the space sector. At Masdar Institute, we are equipping our students with the skills needed to design and build small satellites; thus, these joint activities with the UAE Space Agency and JAXA will indeed enrich the learning outcomes of our Space Systems and Technology Concentration Program”.

Part of the training also included a brief introduction to the CanSat program. A CanSat is a type of sounding rocket payload used to teach space technology, similar to the technology used in miniaturized satellites. In CanSat competitions, the payload is required to fit inside the volume of a typical soda can (66mm diameter and 115mm height) and have a mass below 350g. The Masdar Institute students were also given a tour of an exhibition that showcased technologies used for space applications at the Tokyo SkyTree.