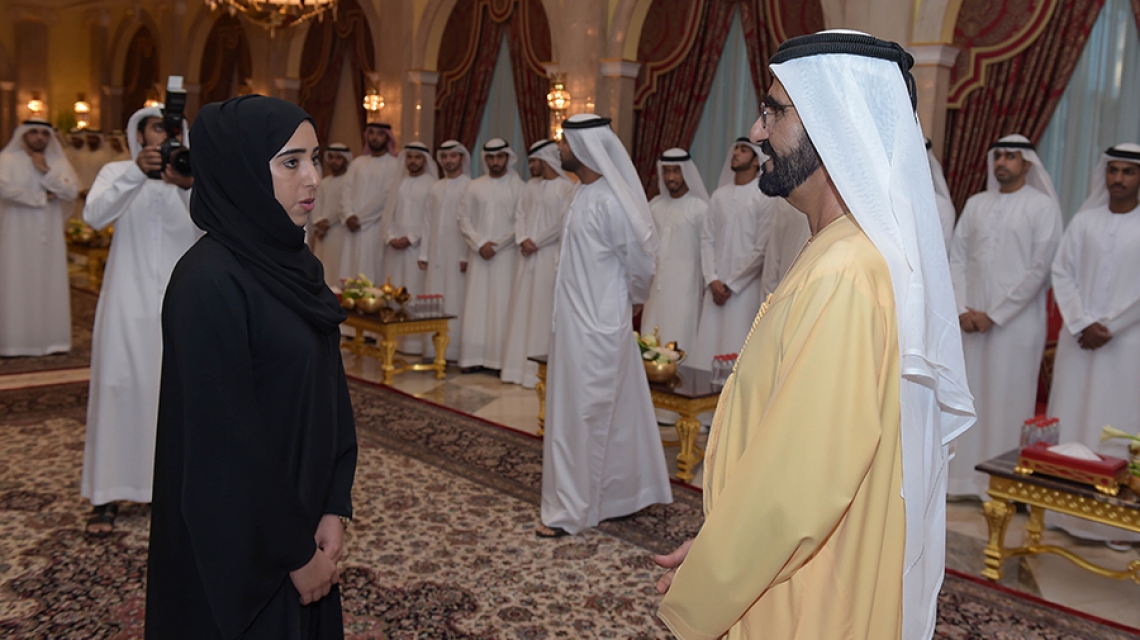 Two Masdar Institute Class of 2016 alumni were received by His Highness Sheikh Mohammed bin Rashid Al Maktoum, Vice President and Prime Minister of the United Arab Emirates and Ruler of Dubai, at the Zabeel Palace at a reception and iftar held to congratulate top achieving university graduates in the UAE.

The two Masdar Institute alumni – MSc in Engineering Systems and Management graduate Maryam AlMazrouei and MSc in Mechanical Engineering graduate Abdulla Alshehhi — were nominated for the honor due to their high academic rankings during their Master’s studies.

His Highness Sheikh Mohammed congratulated the young men and women on their academic excellence and urged them keep up the good work. He noted the importance of engaging in scientific research and told the graduates that the UAE and its leaders count on them for sustainable development, state-owned news agency WAM reported.

“I am extremely proud to be among UAE’s top graduates. Our achievements are a result of the continuous support from our leaders and government, who have conveyed a spirit of adventure that has always inspired me to thrive for excellence and nothing less,” AlMazrouei shared.

“HH Sheikh Mohammed bin Rashid has been always a living role model to me. Meeting His Highness gave me a huge push to always maintain the first place and to work hard.”

AlMazrouei won Masdar Institute’s Class of 2016 Best Thesis Award for Engineering Systems and Management, for her thesis titled ‘CO2-Enhanced Oil Recovery System Optimization with System Dynamics Material Balance Characterization of Injection. Her thesis aims to enhance the commercialization of carbon capture, utilization and storage (CCUS) technologies, which is a technological system that is expected to play a central role in the fight against global climate change.

“It was a great pleasure to meet His Highness Sheikh Mohammed Bin Rashid and to hear his motivational speech, which urged us to continue developing ourselves and work harder to achieve our goals and become future leaders,” Alshehhi shared. “His words were very inspiring, encouraging us to pursue our future dreams.”

Alshehhi was one of the two students involved in an innovative collaborative research project with Etihad Cargo to design a new cool dolly. The new dolly would optimize the transportation of temperature-sensitive cargo, which includes pharmaceuticals and perishable products that need to be transferred between the aircraft and storage compartments in cargo warehouses, providing Etihad Cargo and the Abu Dhabi International Airport a unique competitive advantage over other airports.