The Center for Catalysis and Separation (CeCaS) is the UAE’s only research center focused on addressing the broad industrial challenges relating to these processes. The center provides a multiscale integrated approach to solve scientific and engineering problems that spans across scales and disciplines through its research themes. With its strong connections to industry and with international collaborators, the center aims to grow steadily, contributing to both fundamental and applied research, while serving the needs of KU and the region and educating new generations. 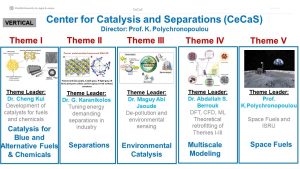 The need of replacing fossil fuels and proposing greener, more efficient technologies is becoming more imperative given the finite nature of fossil resources and the apocalyptic consequences on climate by the ever growing greenhouse gas (GHG) emissions. For example, synthesis gas (syngas), which at present is mainly being produced using natural or shale gas as a feedstock, is a crucial intermediate resource for the petrochemical industry as it is necessary for the production of hydrogen, ammonia and Fischer-Tropsch liquid energy carriers, such as methanol, olefins, paraffins, aromatics and oxygenates. However, syngas can also be obtained via the dry reforming of methane (DRM) using biogas as a feedstock, which has the attraction of utilizing CH4 and CO2, i.e., the most abundant greenhouse gases. Active catalysts are the enablers that facilitate such molecular chemical transformations, as the above discussed, towards the desired product (selectivity) for long duration on stream (stability). In some catalytic reactions the in-situ product removal (e.g. CO2) would allow these reactions to proceed beyond equilibrium or it will lead to blue products (e.g. blue hydrogen). Such a process integration can lead to an ultimate sustainable technology less energy-intensive with much less production of waste.

Theme 2 focuses on developing technologies for separating HCs, removing carbon, producing blue energy, removing contaminants and purifying products. The central families of technologies are based on adsorption, membranes, and absorption. Due to its nature, the developed technologies are in integration with the rest of the themes in a complementary and mutually benefitted manner toward integrated technology platforms. In particular, the Theme 4 (modeling) outcomes are valuable towards the development and optimization of highly selective materials/sorbents/membranes, while Theme 2 provides data for the modeling activities of the former as well as for the process design. In analogy, Theme 2 is collaborating closely with Themes 1, 3, and 5 towards combined catalytic and separation multifunctional systems and processes. Targeted outputs are: 1) nano-engineered highly selective materials/adsorbents/membranes and high affinity sorbents for energy-efficient separations and 2) novel designs and integration of separation technologies.

In particular, the UAE economy relies predominantly on hydrocarbon-related industries. As separations can account for 40-90% of the CAPEX and OPEX of hydrocarbon processing, even small improvements in separation efficiency can significantly enhance the profitability and sustainability of the related processes. Therefore, the direct benefits of the Theme 2 research outcomes are anticipated to be very significant as it can result in considerable reduction of cost for various separation applications, and by the fact that less energy will be consumed and the environmental impact of the performed separations will be significantly reduced. The theme will also contribute significantly toward production of blue hydrogen by developing efficient technologies for carbon removal and separation of CO2 from hydrocarbon-sourced hydrogen. The theme combines science and engineering (e.g. design of novel separating materials/agents) with technology integration, and trains students and researchers to perform cutting-edge, industrially-relevant research.

For many years, air contaminants including particulate matter (PM10), lead, ozone, and fossil fuel byproducts such as volatile organic compounds (VOCs), nitrogen and sulfur oxides (NOx and SOx), have been causing threats to public health. These pollutants accumulate in the lower atmosphere due to continuous flaring and fugitive emissions from vital industries (e.g., energy, transportation, manufacturing, agriculture, etc.), posing serious environmental threats. Besides atmospheric pollution problems, both soil and water contamination issues result from the deposition of air pollutants, the release of poorly biodegradable wastes, and the discharge of inadequately treated wastewaters to the environment. Water and soil pollution problems significantly challenge global food and water security by endangering both aquatic and land ecosystems. Moreover, the transmission, accumulation, and magnification of persistent organic contaminants released from either human uses or industries (e.g., pharmaceuticals, pesticides, and textile dyes) through water and the food chain, lead to deleterious health effects on aquatic organisms, mammals, and humans, and accelerate the spread of infectious diseases due to the rise of resistant and pathogenic microorganisms.

Expected output: 1) Design of advanced material concepts and integrated catalytic approaches. 2) Exploration of green synthesis strategies. 3) Contribution to the United Nations’ 2030 Agenda for the SDGs and the associated UAE initiatives and projects.

Multiscale modelling should enable study of large complex design spaces on all scales, making possible new designs of catalytic materials and separation processes. The development cost and cycle length of new technologies at both material and process levels have been always a concern for R&D petrochemical industry. The reason is physical testing has been costly and/or the resulting empirical guidelines lack in many cases accuracy and/or cannot be used outside the conditions for which they have been initially developed. Also, the data generated from the physical testing and the multiscale simulations can be used to develop and train modelling algorithms using the latest machine learning techniques. Thus, multiscale modelling ranging from Molecular dynamics to CFD and process design, and data-driven modelling should help R&D take advantage of the data generated from physical testing in the most cost effective way possible. This theme supports and retro-feeds the previously mentioned themes in conducting theoretical modelling of related materials and processes in a hierarchal manner. At the bottom of the hierarchy, Density Functional Theory calculations (DFT) will be performed at the atomic scale, to acquire crystallographic and electronic properties of the pertinent “minimum energy – relaxed” nanostructures. At the molecular scale, Molecular simulations will be done to gain molecular insight leading to the prediction of macroscopic properties including adsorption isotherms, selectivity and breakthrough curves, in addition to the molecular configurations. The macroscopic properties will then be used in continuum level models such as computational fluid dynamics to simulate the performance at the equipment scale. At the plant scale, plant-wide modelling to predict plant performance, economics, and develop control strategies for technologies. Finally, Strategic level models will be developed based on the results of the lower levels to devise investment strategies at the corporate or government level.

UAE is the first arab country to reach Mars in February 2021, a year coinciding with the 50th anniversary of the UAE. Deep space explorations to Mars and Moon are in the UAE Strategic Timeline for Space Exploration. A Lunar mission is scheduled for the 2024 and for that UAE plans to make a rover which will be sent to the Moon to study thermal properties of the Lunar surface and study Moon-plasma interactions, photoelectrons and dust particles on the lunar surface. The theme aims to pave the way for discoveries that can contribute to the development of science and specialized high-precision technologies in the space sector. Energy production is mandatory for making the extraterrestrial space human friendly and allow the planets colonization.  Processes, such as oxygen production out of CO2, Fuels production from CO2 as well as exploitation of the different planet’s sources towards food production appear exotic, though necessary, steps towards realization of moving to another planet in a 100 years from now according to the UAE space sector timeline.  This particular theme is focusing on the use of plasma catalysis principles towards production of fuels in other planets utilizing all the possible resources the other planets have to offer. The plasma catalysis was chosen as plasma can successfully simulate the atmospheric conditions of planets e.g. Mars (rich CO2 atmosphere, low temperature and pressure compared to earth). By adopting low temperature plasma processes a stable and reliable supply of oxygen can be achieved as well as carbon monoxide fuel can be produced (CO acts as propellant mixture in rocket vehicles). The number of countries/nations involved into the global space economy is undoubtedly changing and growing. The missions to the outer space, with more emerging technologies are increasing. UAE is aspiring to be included into the nations that seek to exploit the advantages of outer space, in the context of a wider contribution from the commercial and academic sectors and a higher level of cooperation between space-faring nations. The in-situ resources utilization concept (ISRU) can simplify the logistics of a mission to Mars as it allows for self-sufficiency, and reduce costs due to drop of the number of vehicles required to carry fuels.