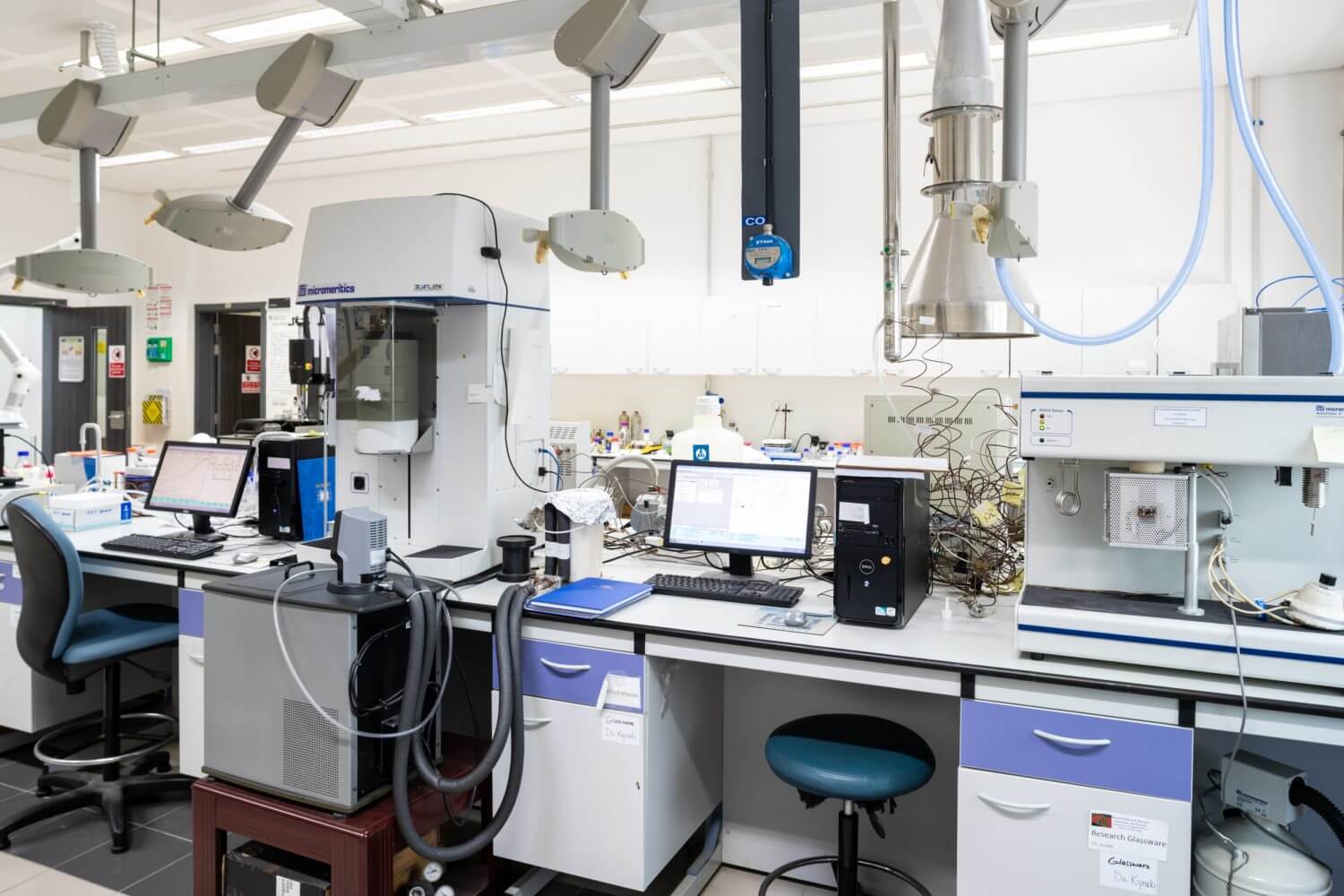 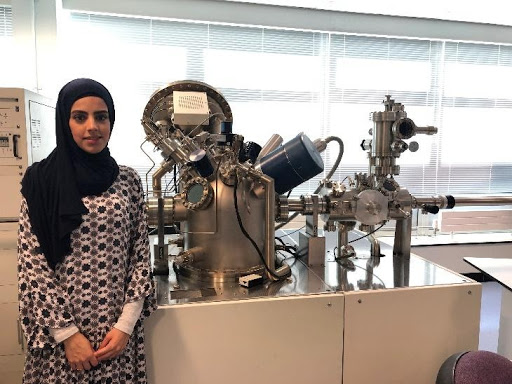 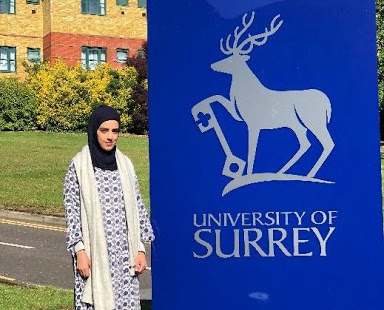 Sara Alkhoori is a full-time MSc student in mechanical engineering under the supervision of Assoc. Prof. Kyriaki Polychronopoulou. Her MSc thesis is focused on improving metal oxide catalysts for biogas dry reforming reaction by coupling mechanochemical synthesis with enhanced microwave chemistry. Earlier this June, she was invited to visit university of Surrey in England during the period 15th to 30th of June for an organized study program on surface analysis training using the state-of-art x-ray photoelectron spectroscopy (XPS).

This technique is used to analyze the surface chemistry of a material by identifying the elements on the surface and quantifying their elemental compositions and chemical environment. Therefore, the use of it in catalysis is expected to deepen the overall understanding of the chemical behavior of a catalytic surface. Sara had a great opportunity to visit the Surface Analysis Laboratory at Surrey and engage with the experts in surface science, Dr. Mark Baker (Reader) and Dr Steve Hinder (Research scientist). Being trained on XPS will further her academic studies as a postgraduate research student at Khalifa university and enrich her knowledge in surface sciences. 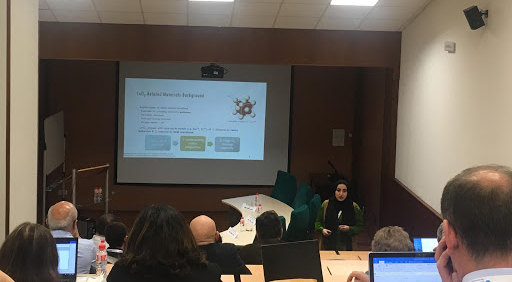 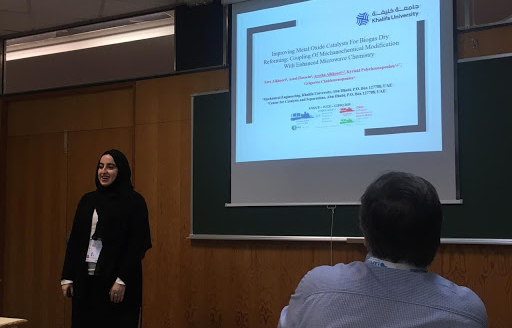 Ayesha Abdulla Alkhoori is a PhD student in Prof. Kyriaki Polychronopoulou’s group. She works as a full-time student under the Center of Catalysis and Separation (CeCaS). Alkhoori is majoring in Materials Science and Engineering. Her PhD thesis is focused on developing materials for hydrocarbon

This international congress is a reference for researchers in the field of chemical engineering and chemistry applied to the industry. Alkhoori had the opportunity to exchange up-to-date information and connect with researchers and experts from different universities and countries.

Mrs. Margarida Ferreira, was a visiting student of the Center of Catalysis and Separations (CeCaS) 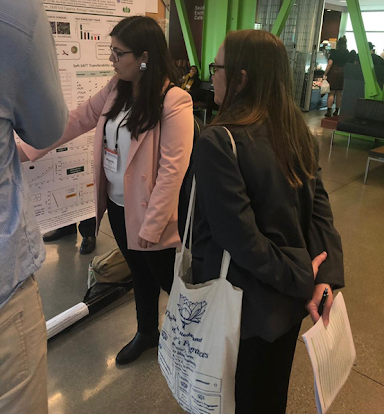 Mrs. Margarida Ferreira, was a visiting student of the Center of Catalysis and Separations (CeCaS) supporting the modeling work we are doing in CeCaS under Theme 3 ‘Multi-scale Modeling’, and embracing the existing collaboration between the research group she belongs to in Lisbon (Portugal) and our KU research group. Mrs. Margarita Ferreira, presented the joined work in the International Conference on Properties and Phase Equilibria for Product and Process Design, PPEPPD, held in Vancouver, CANADA, on May 12-16, 2019. [Photo: Mrs. Ferreira explaining her poster to Prof. Joan Brennecke, the editor in chief of the Journal of Chemical and Engineering Data (American Chemical Society)]

Paper on Catalysts Published in Applied Catalysis B: Environmental

Center of Catalysis and Separation (CeCaS) scientific team recently co-authored/co-led a research paper in the prestigious journal Applied Catalysis B: Environmental, with an impact factor of 16.683 (Elsevier, Q1). The team is composed of G. Siakavelas (Visiting Scholar in CeCaS from University of Western Macedonia (UWM), Greece), Prof. M. Goula (UWM) and the KU PhD students Ayesha A. AlKhoori and Sara I. AlKhoori supervised by Prof. K. Polychronopoulou, Director of CeCaS.

The publication under the title “Highly selective and stable nickel catalysts supported on ceria promoted with Sm2O3, Pr2O3 and MgO for the CO2 methanation” came as a result of a fruitful collaboration with Prof. Maria Goula’s group from the UWM (CeCaS external partner). The doctoral student, G. Siakavelas, co-advised by both Prof.M. Goula and K. Polychronopoulou, kicked off this study while spending a visiting scholarship period in CeCaS research laboratories in 2018. During his stay he received training on the state-of-the-art synthesis and characterization methods by KU and CeCaS research staff and students. This study was further advanced from both sides, UWM and KU, after his departure from KU leading to a breakthrough on catalytic materials for the CO2 hydrogenation reaction.

In particular, this research explores the efficacy of the catalysts to convert the greenhouse gas carbon dioxide (CO2) into useful fuel, such as methane (Sabatier reaction) and highlights how the intrinsic properties of the catalysts can be tuned by using non-conventional methods of preparation and selected catalyst’s promoters. The significant role of this reaction can be understood based on the wide spectrum of methane applications; synthetic gas in the residential sector, raw material in different industries, and fuel for transportation. In addition, the CO2 to CH4 conversion is an important reaction for future manned space exploration to the red planet. The reaction is meant to utilize the Martian CO2-rich atmosphere to generate CH4 as propellant fuel and H2O as life support consumable. This research is ongoing and more exciting news are on the way. 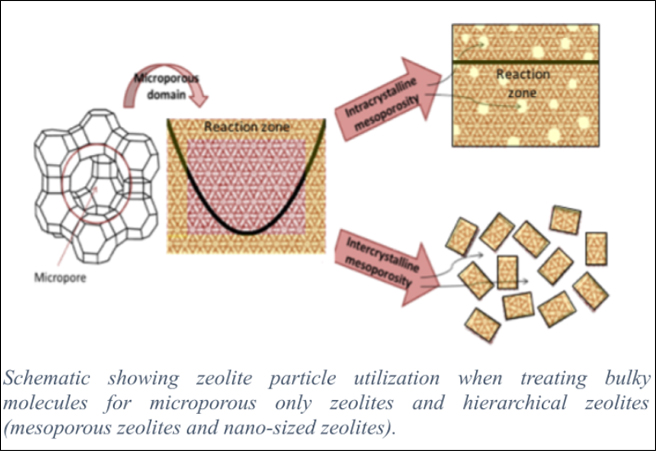 Even though fluid catalytic cracking (FCC) process started ~75 years ago, it is still the prominent conversion technology in the oil refinery to produce gasoline, propylene and other valuable products. In spite of efforts to find alternative energy resources to meet sustainability and environmental protection, the difficulties on massive production of renewable energy suggest continuing use of oil for many decades due to its maturity, efficiency and the availability of technology know-how. Undoubtedly, zeolites are vital catalysts and the major component in the FCC process to date. ~ 2,300 metric tons of FCC catalysts are produced per day, which means that ~0.16 kg of FCC catalysts are required for converting one barrel of feedstock.

However, the amount of utilization of zeolite catalysts depends on the feedstock. For instance, resid feedstock needs more catalyst than lighter feeds. Irrespective of the feed properties in FCC, occurrence of catalytic activity loss necessitates addition of certain percentage of fresh catalysts to the catalytic reactor on a daily basis in order to maintain the desired conversion. Therefore, increasing the stability of the zeolite phase can enhance the economics of the process. The recent addition of RFCC (residue FCC) in order to process heavy feed in refinery operations worldwide motivated researchers in both academia and industry to further explore ways to improve catalyst stability, activity and selectivity. We propose strategies to improve catalysts for RFCC applications by synthesizing zeolite Y with tunable (hierarchical) porosity.