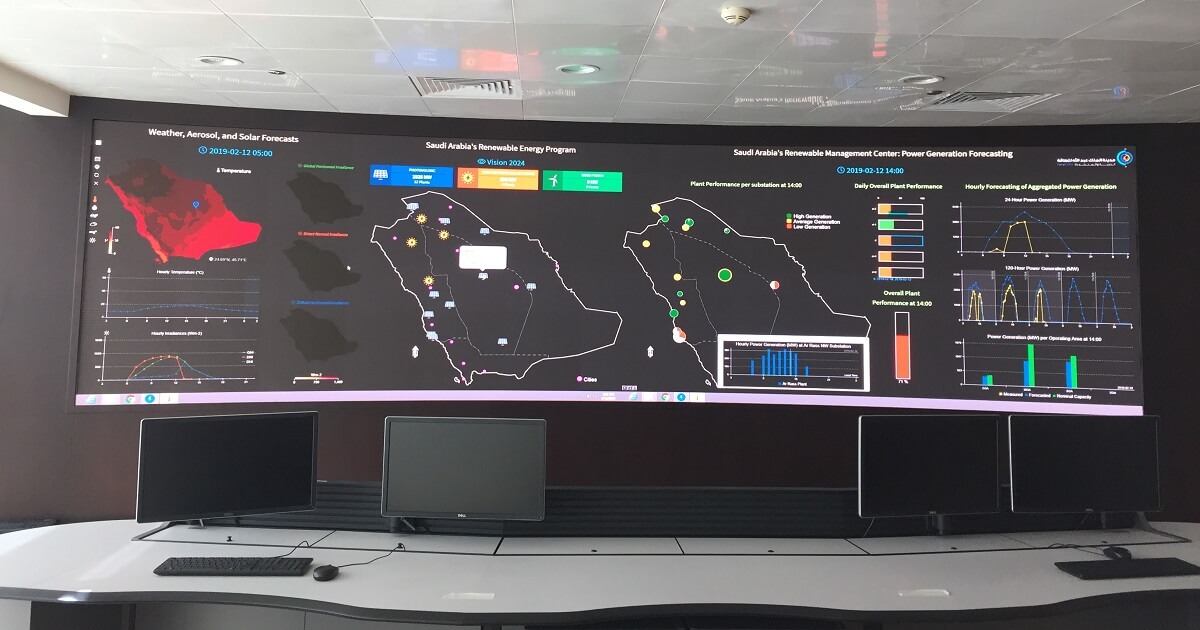 The world is moving continuously towards the use of more sustainable sources of energy than the fossil fuels on which we predominantly rely today. The International Renewable Energy Agency (IRENA) suggests in its 2019 GCC Renewable Energy Market Analysis report that stated plans and targets for renewable energy in the GCC put the region on track to see a major acceleration in renewable energy deployment in the coming years with the UAE and Saudi Arabia at the forefront.

“Saudi Arabia is planning to increase the share of renewable energy in the total energy mix, under its ambitious Vision 2030 plan, in order to ensure long term economic stability,” explained Dr. Imen Gherboudj, Senior Research Scientist at the Research Center for Renewable Energy Mapping and Assessment (ReCREMA) at Khalifa University. “The challenges are multiple, including the plan to integrate 27.3GW and 58.7GW of renewables by 2023 and 2030, respectively.”

To foster the integration of renewable energy sources, the King Abdullah City for Atomic and Renewable Energy (K.A. CARE) has initiated the development of the Renewable Management Center (RMC) in collaboration with Elia Grid International and Khalifa University.

Saudi Arabia is facing increasing demand for electricity and desalinated water as the country’s population and economy grows. According to government estimates, the demand for electricity may exceed 120GW by 2032. Unless alternative energy and energy conservation measures are implemented, the overall demand for fossil fuels to meet this demand will continue to grow along with the associated carbon emissions and opportunity costs of burning resources that could be exported or transformed into higher-value products.

KU’s ReCREMA was established in 2012 to support the UAE and IRENA in the advancement of a publicly-accessible database of solar and wind resources. The work done by the center has vastly improved understanding of the solar and wind resources of the Arabian Peninsula. Through its remote sensing, mapping and modeling expertise, ReCREMA has produced a number of tools to help the UAE improve air quality, preserve water resources, and increase the contribution of clean energy. Now, the center is leveraging its expertise in mapping and modeling renewable resources to aid Saudi Arabia in its efforts to bolster its clean energy capacity through its latest innovative tool, the RMC.

“The main function of the RMC is to provide key stakeholders in the electricity sector with information that will ensure a smooth integration of renewable energy sources, which has a direct impact on how the energy sector will manage generation, transmission and distribution,” said Dr. Gherboudj. “The RMC is equipped with a screen that displays the output of models developed by Khalifa University, including weather, dust and solar forecasts for the Arabian Peninsula. The system also displays renewable power predictions for solar photovoltaic and concentrated solar plants.”

The screen will provide information on the renewable energy production potential in an easy and understandable way for the system operators and experts. Solar and wind renewable resources are subject to fluctuations in supply and so predicting their availability will allow the system operator at the national grid to best utilize them. The screen will display the available renewable energy plants with their characteristics, individual and integrated generation profiles (from two days ago, actual, and for two days ahead) for each and all installed renewable energy plants, and past and forecasted weather conditions (irradiation, wind, dust, temperature) in the Kingdom. The screen will also provide information allowing the RMC staff to review historical generation.

Detailed research indicates the introduction of alternative sources of energy will ensure a marked reduction in the use of fossil fuels for power generation and water desalination, which means longer-term availability of hydrocarbons for export and national industry. By developing an intuitive system that accurately monitors and helps forecast the availability of renewable resources, ReCREMA is helping Saudi Arabia maximize the utilization of clean energy in its electric grid, supporting the country’s ambitious goal of generating nearly 60GW of renewable energy by 2030.