It is estimated that every year up to two billion tons of dust are carried into the atmosphere, mainly by dust storms. One dust storm alone can lift and deposit more than 200 tons of dust, with the Arabian Peninsula listed as one of the five major-dust producing regions in the world. As residents of the United Arab Emirates know well, dust storms can seem frequent in this area.

A dust storm, or sand storm, is a collection of particles of dust or sand, vigorously lifted to great heights by a strong and turbulent wind, reducing visibility and causing hazards and nuisance. Although little distinction is usually made between whether the cause of the poor visibility is dust or sand, there is a difference: the diameter of grains of desert sand usually varies from 0.15mm to 0.3mm, with the lower limit being 0.08mm. Anything below 0.08mm is defined as dust, which is more likely to be found in and around inhabited areas where human activity tends to break and crush sandy soil to produce finer sand or dust.

Observational records kept at Abu Dhabi International Airport from 1982 to 2001 show that while haze due to dust, commercial pollutants, or moisture is very common and occurs on average 242 days of the year, dust storms are far less prevalent—the average being three per year. Dust storms then are not as common as one would think, given the geographical location of the UAE and the tumultuous weather experienced by the country in the early months of 2019.

Dust events are most likely when the wind is off the desert to the south, and considerably less so when the wind is from the north-west with Shamal conditions and dust has to be transported across the Arabian Gulf. A Shamal wind is a northwesterly wind blowing over Iraq and the Persian Gulf states, which blows almost continuously in June and July. The problem with forecasting dust storms associated with Shamal winds is that the storms are not common, so the forecaster needs to be more vigilant when model data indicate strong winds from further afield. Poor visibility is most likely from after sunrise during the morning and the early afternoon during the time of surface heating, and when the regular morning land breeze reinforces any southerly flow off the desert.

When a severe dust storm hit the Middle East in April 2015, extremely low visibility resulted in hundreds of road accidents, dozens of flight delays, and school closures. The team of researchers at the Khalifa University’s Masdar Institute, however, were delighted as the dust storm validated the researchers’ dust model, which simulated the dust storm ahead of time, making it one of the most effective dust models to date for predicting dust storms in the region.

This year, researchers from the Masdar Institute published a paper in Air Quality, Atmosphere and Healthdetailing their findings and examining the impact of severe dust storms on air quality conditions using the sophisticated technology and methods available at the Institute. The authors explained airborne particles emitted and transported during dust storms affect climate and weather systems by changing cloud microphysical properties and atmospheric temperature profiles, while also deteriorating air quality conditions and impacting human health. They highlight that understanding the complex effects of such events is particularly important especially in the Arabian Peninsula.

The authors investigated one particular extreme dust event occurring between March 29 and April 3 in 2015; it was used as a test to assess the performance of the WRF-Chem model. The Advanced Weather Research and Forecasting (WRF-ARW v3.8.1) model with the chemistry/aerosol (WRF-Chem) is used to simulate emissions of aerosols and gases, their transport, and chemical and microphysical transformations.

Their study suggests that the dust event was trigged by Shamal wind—as the dense dust plume passed over the country, the temperature dropped by around 7°C and strong northeast winds reached speeds of 14m s-1. “Modeling of dust over desert areas is still challenging because of lack of information about dust sinks and correct linkage with meteorology,” said the researchers. “The use of ground observations from meterological stations and air quality stations may be used in the future to validate and correct modeled simulation of dust over the UAE as well as to understand caveats in the input data, such as emission inventory and land use data used in the WRF-Chem model.”

This research represents the first attempt to use WRF-Chem results to estimate the air quality index over the UAE as well as the possibility to use two satellite products (the Moderate Resolution Imaging Spectroradiometer with the Multi-Angle Implementation of Atmospheric Correction algorithm [MODIS-MAIAC] and the Meteosat Second Generation Spinning Enhanced Visible and Infrared Imager [MSG-SEVIRI]) to track dust over the UAE. “This work showed the added value of using high spatial resolution satellite data as future datasets that could be assimilated in air quality modeling to increase accuracy when forecasting air quality conditions,” concluded Dr. Morouane Temimi, Associate Professor of Civil Infrastructure and Environmental Engineering.

“With access to accurate forecast of dust events and sandstorms, people can better prepare for them. This information will be extremely useful for the transportation sector, as it will help show motorists, pilots and air traffic controllers where the dust will be and for approximately how long,” said Dr. Hosni Ghedira, Director of the Research Center for Renewable Energy Mapping and Assessment (ReCREMA) and Professor of Practice at Masdar Institute in 2016.

By being better able to predict the UAE’s dust storms, the country can more effectively and efficiently manage its agricultural sector, renewable energy infrastructure, transportation, health, environment, and climate policy­—and provide advanced warning to reduce risk to human life. Researchers at Masdar Institute are responding to the country’s need with several dust-focused research projects, including a comprehensive characterization of the UAE’s dust.

Dust storms are expected to become more prevalent with global climate change, but the UAE government says it is on top of this problem and actively seeking ecologically sustainable solutions for everyday life and getting involved in climate change dialogues around the world. This expectation is backed up by research from Masdar Institute which found that severe dust storms are occurring more frequently in the UAE, accelerating the need for a reliable and accurate dust forecasting system for the region.

The Extreme Weather App pairs the regional expertise and practical knowledge developed at MI with sophisticated Earth-observation technologies and scientific modeling­—as the UAE invests more heavily in Earth-monitoring satellites and on-the-ground research, the dust forecasting system will be supported in helping the UAE be better equipped to tackle dust storms. 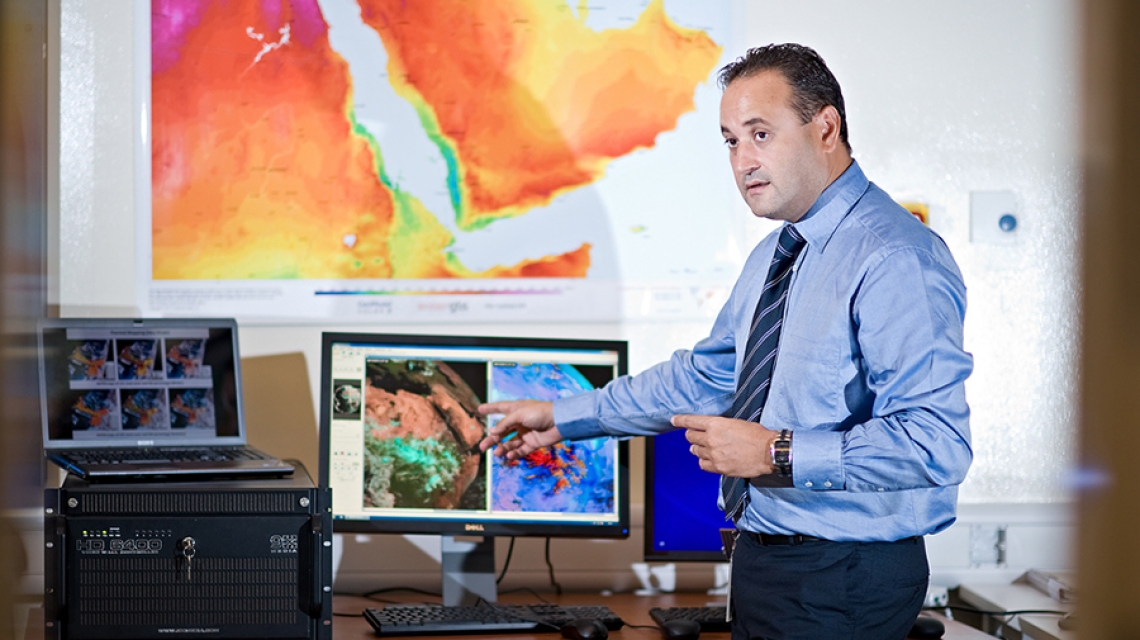