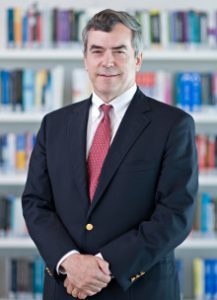 announced Professor Bruce Walker Ferguson has been named Vice-Chairman of the Carnegie Institution for Science.

This is the first time in Carnegie’s 112-year history that a resident of the Middle East has served as a trustee of the respected institution.

The Masdar Institute announcement follows the annual meeting last month in Washington, D.C., in which the Board of Trustees of the Carnegie Institution elected Professor Ferguson as its non-executive Vice-Chairman. The term of office is three years renewable.

The Carnegie Institution is one of the world’s oldest and most respected not-for-profit science research foundations. While its trustees have lived in the U.S., Europe, Japan, Canada, and other countries, as a resident of Abu Dhabi Professor Ferguson has become the first trustee to live in the Middle East.

Dr Fred Moavenzadeh, President, Masdar Institute, said: “We welcome the appointment of Professor Bruce Ferguson to the Carnegie Institution for Science which bears testimony to the high caliber of our faculty. With the support of the country’s leadership, we continue to raise our profile among world-ranked institutions through renowned faculty who are recognized by other global science institutions. Faculty is the mainstay of any academic institution and we will steadfastly progress to achieve our goals and remain among the top research-based scientific institutions in the world.”

Professor Ferguson said: “The expanded reach of Carnegie’s Board membership reflects the increasing globalization of science and technology. I look forward to continuing to support basic science research at Carnegie and technology-directed research at the Masdar Institute. Both are vital components of the innovation ecosystem needed to develop a knowledge-based economy.”

Professor Ferguson is a co-founder and former COO of Orbital Sciences Corporation, a space technology company listed on the New York Stock Exchange, and the co-founder and former CEO of Edenspace Systems Corporation, a plant biotechnology company developing new renewable energy and environmental products. He has been a Fellow at the George Washington University Center for International Science and Technology Policy, and Vice-Chairman of the Kansas State University Research Foundation. He received his Juris Doctor (JD), Master of Business Administration, Master of Education, and Bachelor of Arts degrees from Harvard University.