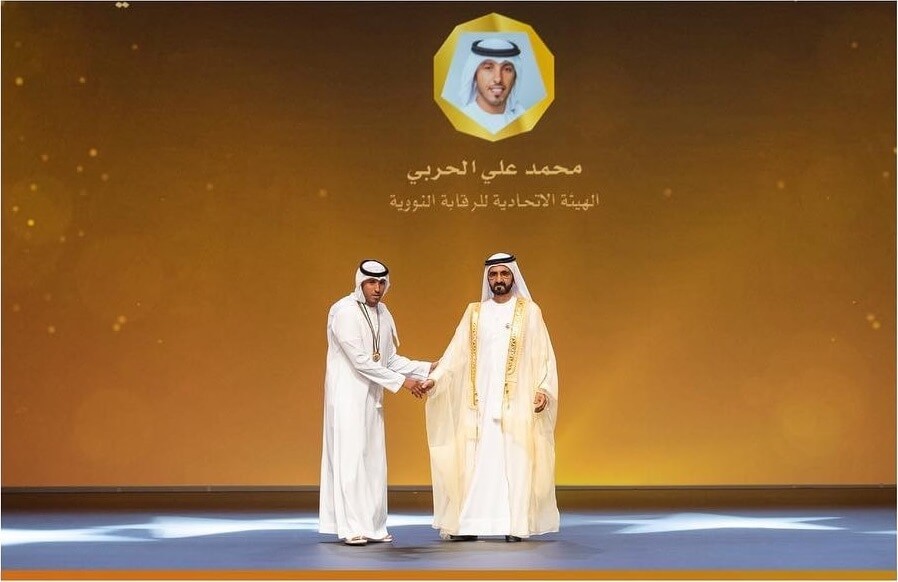 “The Mohamed bin Rashid Government Excellence Award would not have been possible for me without the kind of quality education I received from Khalifa University. During my studies, I gained knowledge, skills and the right attitude that have helped me to become the man I am today. For this, I thank my beloved Khalifa University,” Al Harbi proudly shared.

Having won the FANR Director-General Medal for the ‘Best Field Employee’ in 2018, Al Harbi was nominated from FANR for the fifth cycle of Mohamed bin Rashid Government Excellence Award. After a rigorous process of selection, assessments and interviews, he was selected for the award from among 40 other competitors across various UAE federal entities.

He said: “Reaching the final stage of nomination and winning the medal required courage, huge effort, creativity, passion and agility, and you only succeed if you sustain till the last moment. By winning this award I have achieved a significant milestone in my personal and career life, and I am sure I still have more to achieve and contribute to the UAE’s vision to become among the best countries in the world.”

Al Harbi joined FANR in 2012 as Nuclear Security Engineer and was promoted in 2017 to Specialist Resident Inspector at the Barakah Nuclear Power Plant. He has successfully played his role in the implementation of nuclear safety-related inspections including construction inspection and test plan (CITP), serving as subject matter expert in special inspections, and implementing FANR’s Emergency Response Organization (FERO) Nuclear Assessment Team procedures and processes.

Al Harbi wants to pursue his PhD in Nuclear Engineering, probably by 2020, but only after gaining practical and hands-on experience from his residency at Barakah.

Al Harbi completed the Gulf Nuclear Energy Infrastructure Institute (GENII) course at Khalifa University back in 2013, and was invited as a speaker at the University for the NUCE614 and IICS691 classes.

From a personal perspective, he would like to join the ‘UAE National Experts Program. “This will help me achieve all of my future goals by developing a new set of leadership skills which in return would enable FANR to achieve its core values, vision and mission,” remarked Al Harbi.