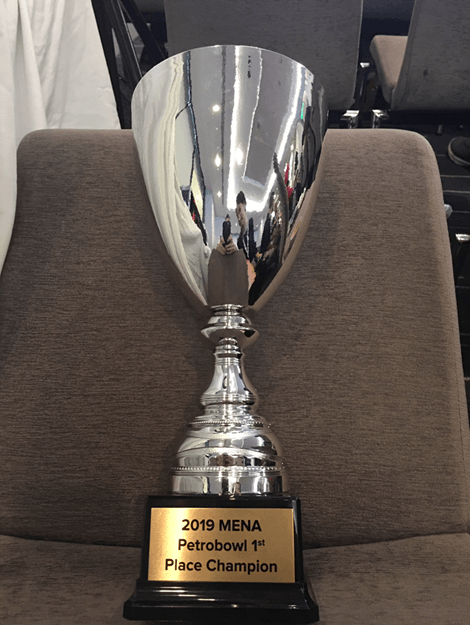 A five-member team of the Society of Petroleum Engineers (SPE) Student Chapter from the Khalifa University of Science and Technology has become the first place winners of the 2019 MENA SPE PetroBowl® Regional Competition in Manama, Bahrain.

The PetroBowl competition pits SPE student chapter teams against each other in a series of quick-fire rounds, answering technical and nontechnical industry-related questions. The challenge was organized in conjunction with the 21st Society of Petroleum Engineers Middle East Oil & Gas Show and Conference (MEOS 2019) from 18-21 March in Bahrain.

Team members, elated by their regional win, are looking forward to the final stage when they will compete against other regional champions.

Deena Elhossary said: “I feel overjoyed that my team members and I have achieved great success at the 2019 MENA SPE PetroBowl® Regional Competition, proudly representing Khalifa University and the UAE. I am honored to be part of the team which consists of very hard working, intelligent and supportive individuals.”

Omar, who led the KU SPE team, felt overcoming teams from King Fahd University of Petroleum and Minerals (KFUPM) in the semi-final and King Abdullah University of Science and Technology (KAUST) in the finals was truly amazing.

Omar said: “I feel really proud and honored to be part of this team, let alone being the captain. Everyone worked so hard for it, and thankfully we were able to become the MENA Regional Champions.”

It was Waleed who summed up the team’s persistence that brought them the success. He said: “In 2017, we came third in the regional competition and then went out in the second round of the international competition in Texas. Both were heavy losses, as we felt we really could have done much better.”

Waleed was referring to the SPE Student Chapter team that became the only one from the Middle East region to make it to the second round with the highest scores in the fiercely contested 2017 PetroBowl International Competition in Texas, US.

Explaining what brought about their success this time around, Waleed said: “We went the extra mile at every level, reviewed everything we have ever studied in Petroleum Engineering, even covered subjects not taught at our university, and memorized industry statistics. In addition, we read history books looking for all the important milestones, technological achievements and historical events related to the oil and gas industry. Furthermore, we met two or three times per week to rehearse and practice. In the end, our efforts paid off, and despite being the under-dogs, we won.”

The toughest round was the semi-final, when the team had to face 2017 champions, who knocked the KU team out that year, according to Waleed. But with a spectacular performance, the KU team played the best game ever and correctly answered one question after the other, not giving the opponent any chance. “From then on, it was only a matter of time although the final was just as tough. The semi-final win gave the level of confidence we needed,” remarked Waleed.

Thaer Ismail believes that the training and hard work brought the team victory. Thaer said: “I feel that the confidence and experience we got from the regional win will help us vastly in the international PetroBowl® to be held in Calgary, Canada in October.”

Omar concluded “Now, we are looking forward to the international competition and we are planning to give it our best and hopefully, we will come back as global champions.”