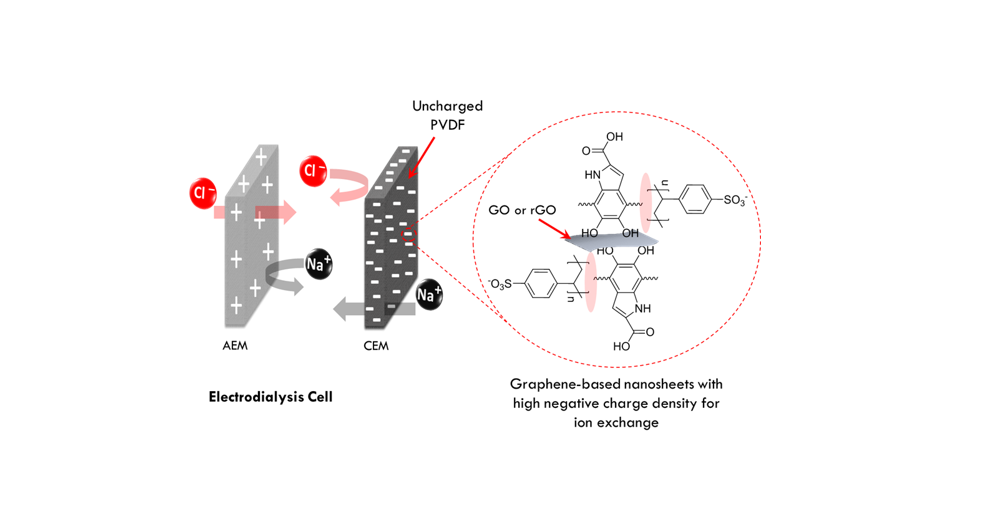 A team from Khalifa University has developed a new nanocomposite membrane using graphene oxide to desalinate water and tackle the region’s water shortages.

Fresh water is in short supply in many parts of the world, and as the population continues to grow, shortages of fresh water will occur more often. Desalination can help provide enough fresh water, and the process can be as simple as using thermal energy to evaporate seawater, capture the produced water vapor, and condense it back into clean water.

The most popular method globally for large-scale desalination, however, is a process called reverse osmosis, which requires pressure to push large quantities of water through a semipermeable membrane, removing the salts in the water. While this is an effective means to desalinate saline water, it is driven by very high hydraulic pressure and requires robust pumping and expensive pretreatment.  Even though the cost of desalination from reverse osmosis has fallen dramatically in recent years, the rapid increase in global water demand warrants new and innovative technologies that are both low energy and effective for purifying water of all types.

A team from Khalifa University has developed a new nanocomposite membrane for use in processes such as electrodialysis and capacitive deionization, which involve the removal of ions from ionic solutions – including salt water – with electrically charged membranes. The membranes used in these technologies are known as ion exchange membranes (IEMs) and those developed by the research team use graphene oxide-based ionic conducting nanomaterials to provide the ion exchange groups in the membrane.

Dr. Linda Zou, Professor of Civil Infrastructure and Environmental Engineering, Dr. Adetunji Alabi, a recent KU PhD graduate, and Dr. Ahmed Al Hajaj, Assistant Professor of Chemical Engineering, are working collaboratively with researchers from The University of Manchester on graphene and ion exchange membranes. Their latest work has been published in Environmental Science Nano, with previous publications in the Journal of Membrane Science and the Journal of Materials Chemistry A.

“Electromembrane desalination processes use the electric potential difference as the driving force for ionic transport through ion exchange membranes,” explained Dr. Zou. “IEMs allow the flow of oppositely charged ions through them, while preventing the passage of similarly charged ions.”

Opposites attract, with an electric field pulling the salt ions through the filtration membrane, thereby desalinating the water.

Due to its dispersible nature in most solvents, graphene oxide is widely used in research on improving the membrane performance for desalination and water purification.

“Graphene-based nanosheets are suitable for these types of membranes for many reasons,” explained Dr. Zou. “They co-adsorbed both 3,4-dihydroxy-L-phenylalanine (L-DOPA) and poly(sodium 4-styrenesulfonate) (PSS), to offer not only ion exchange capabilities by PSS but also stability with polymer matrix through the strong attachment via catechol groups of L-DOPA. This is a novel way to prepare IEMs assisted by nanomaterials such as graphene oxide. Such membranes also have high mechanical and thermal stability and less swelling in water applications.”

To test their membrane, the team conducted electrodialysis tests to assess its salt removal rate, efficiency and energy consumption, and successfully confirmed the feasibility of fabricating nanocomposite IEMs for electrodialysis applications where the ion exchange capacity solely relied on the graphene oxide nanocomposites. The fabricated membrane achieved a substantial salt removal rate over 80 percent, although its energy efficient needs to be further improved as compared to a conventional polymeric IEM.

As the Middle East combats aridity with up to 70 percent of the world’s produced desalinated water, finding new ways to fabricate membranes to produce clean water remains a crucial research objective. Nanomaterials incorporated in IEMs could be beneficial candidates for enhancing electromembrane desalination, with the novel way of fabricating them using nanocomposites as ion exchange materials a huge step forward.