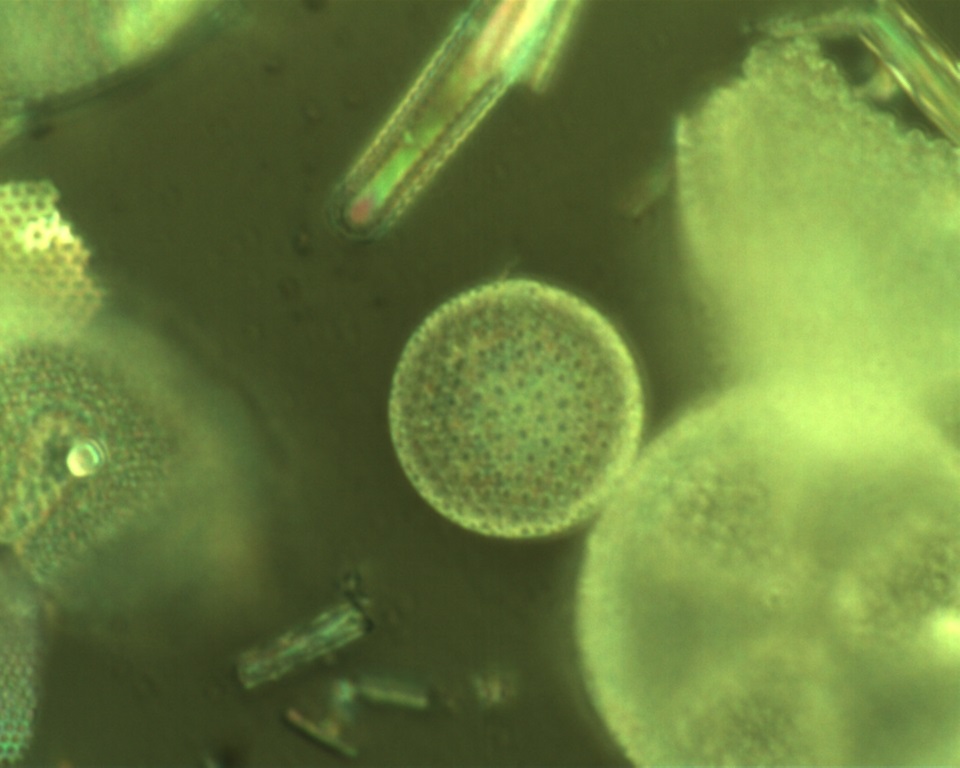 Diatoms shown under a microscope.

A team of researchers have discovered a new way to see organic matter inside of fossilized ‘diatoms’ –  a type of microalgae – using powerful microscopy imaging techniques, which could help scientists better understand the conditions and climate of the Earth thousands of years ago.

Diatoms are one of the most prolific microscopic sea organisms that serve as food for many animals. Beyond that though, diatoms – which include around 16,000 species – can be preserved in the sediment record, offering clues into what life was like on Earth in the past.

The extensive fossil record of diatoms in this sediment record is extremely useful to researchers looking at changes in ecological conditions over long periods of time.

The research team includes Dr. Gobind Das, Associate Professor of Physics at Khalifa University, Dr. Shaun Akse, Dr. Lubos Polerecky and Dr. Jack Middelburg from the Department of Earth Sciences at Utrecht University, Dr. Susana Agusti from the Red Sea Research Center and Core Labs at King Abdullah University for Science and Technology, and Dr. Laetitia Pichevin from the School of Geosciences at the University of Edinburgh. Their findings were recently published in Marine Chemistry.

Diatoms’ unique anatomy features a cell wall made of hydrated silicon dioxide, or amorphous silica, called a frustule. Fossil evidence suggests that certain fossil diatoms originated during or before the early Jurassic period, which was about 150 to 200 million years ago.

This silica is thought to protect any organic matter in the fossilized diatom, which could be investigated to understand and reconstruct the conditions of the oceans at the time the diatom was alive.

“Scientists believe that nitrogen encased in the diatom frustule is protected from any alteration, presenting a more robust insight to the conditions of that time period,” explained Dr. Das.

However, the location of this organic matter within the frustule has proved challenging to identify­—until now.

Using high spatial resolution imaging techniques, the research team identified where the organic material is retained in the fossil. They developed and applied nanoscale secondary ion mass spectrometry (nanoSIMS imaging), which allows imaging of elements down to 50 nanometres.

To validate their findings, they used microRaman spectroscopy and transmission electron microscopy (TEM) to probe further into the fossil and identify the molecular structure of samples. While the TEM technique did not have the sensitivity to image the organic material, the nanoSIMS and Raman techniques imaged the presence of organic matter in fossil frustules for the first time, highlighting exactly where the organic matter can be found.

Diatoms build intricate hard but porous frustules, which are highly patterned with a variety of pores, spines, ridges and elevations. The samples used for the research team’s investigation came from a core of sediment that was 12,450 years old.

“Our findings suggest that organic signals were present throughout the frustule but in higher concentrations at the pore walls,” said Dr. Das.

“As the first result of its kind, our study shows that the organic material embedded in the silica matrix of fossil frustules can be imaged, but the nanoSIMS analysis should be combined with additional high spatial resolution chemical mapping techniques to confirm and better understand the distribution of organics within the frustule of fossil diatoms.”

Finding the organic material in these fossils allows further and more accurate investigation into its composition, which will help researchers understand more about the atmospheric and oceanic conditions of life on Earth more than 12,000 years ago.