The YFEL members were in India as part of a 10-day workshop on â€˜Energy Access, Ethics and Developmentâ€™ jointly being organized by YFEL with the Dalai Lama Center for Ethics and Transformative Values at MIT and the Jamyang School in Leh in northern India at the Himalayan foothills. They are joined by 25 Ladakhi students representing various organizations such as Students’ Educational and Cultural Movement of Ladakh (SECMOL), Leh Nutrition Project (LNP), Groupe Energies Renouvelables, Environnement Et SolidaritÃ©s (GERES) India and The Ladakh Ecological and Development Group (LEDeG).

Since 1975, Helena Norburg Hodgeâ€™s ISEC has been providing Ladakhis with information about the impact of conventional development in other parts of the world, while exploring more sustainable patterns of development in Ladakh itself, based on the use of local knowledge and resources.

Dr Scott Kennedy said: â€œHelena Norburg Hodge offered an inspiring speech on ISECâ€™s activities in Ladakh. Visits to a hydro-electric plant and nearby places of cultural interest expanded the vistas of the YFEL members. Inspecting the system at SECMOL was a real learning experience. We hope the course will enrich YFEL members and motivate them to build expertise in sustainable technologies that benefit remote communities.â€

Dr Ken Volk said: â€œThe YFEL members were remarkable in their interaction with the villagers, both in terms of cultural exchange and collecting real-life data for their projects. They showed true professionalism in their approach, demonstrating their capabilities as future energy leaders. They have lived up to their names as students of Masdar Institute and residents of the UAE.â€

Dr Vinod Khadkikar conducted a theory session on photovoltaics (PV), diesel and batteries used for powering a house or small place such as SECMOL. Dr Scott Kennedy introduced the HOMER software to students to plan a power system for SECMOL. Students had to first determine the electrical load for SECMOL and then design the PV, batteries, wind, and diesel requirement with information provided through the database.

Student teams later used the software designed by Ayu Abdulla, Program Teaching Assistant, who was supported by YFEL member Denes Csala. The software â€˜gameâ€™ helps people see the electrical use in a model home, based on appliances and other devices connected. This was the first time the â€˜gameâ€™ was done with a group, all connected together to see how a ‘village’ uses electricity.  The following session was conducted by Dr. Weidong Xiao on electrical codes for PV systems after which students inspected the system at SECMOL. The YFEL course was completed on 24 August.

Part of the Masdar Instituteâ€™s Outreach program, YFEL offers young professionals and students from the UAE and abroad an opportunity to become more engaged in finding solutions to the worldâ€™s biggest challenges â€“ achieving energy efficiency and tackling climate change. It also aims to bring young professionals closer to government representatives, business leaders and other organizations active in the area of alternative energy and sustainability. 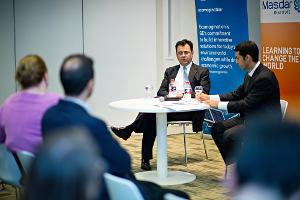