Wonders of 2D Materials & their 3D Nano-Architectures for Energy Storage 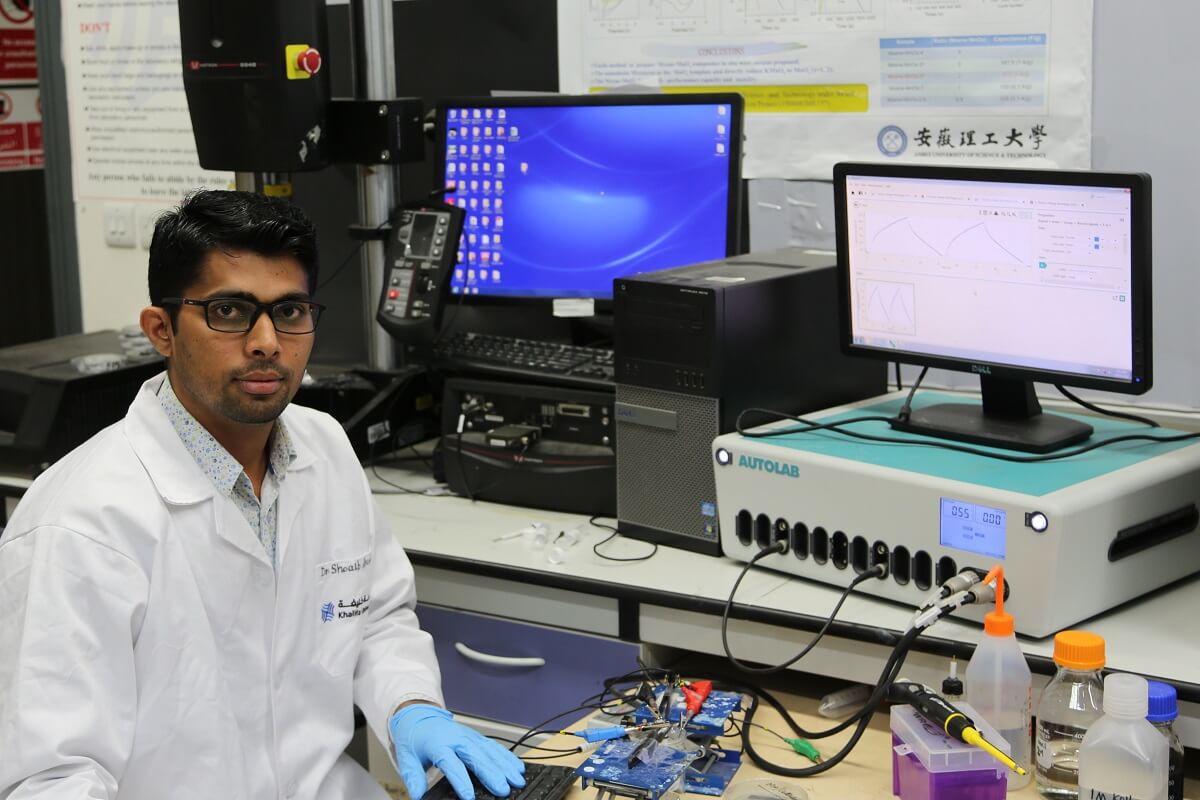 Over the past decade, the UAE has demonstrated a serious commitment to the development of renewable and alternative energy, which is one of the pillars of the country’s economic diversification strategy. The empowerment of renewable energy technology and the rapid advancements in energy storage technologies will lead to significant improvements in our daily life. Batteries play a key role as an energy storage device to overcome the operational challenges caused by the intermittent nature of renewable energy, while advanced flexible energy storage solutions will allow for further miniaturization of portable electronic devices, including wearables.

A major limitation to better electrochemical energy storage systems lies in the electrode. Electrodes are the places in every storage device i.e., battery or supercapacitor, where the chemical reactions occur and where the ions, or charged particles, are stored. Researchers around the world have been racing to develop high-performance electrode materials.

Considering the above mentioned research demands, a collaborative team of researchers at Khalifa University have developed excellent electrodes using ultrathin 2D materials and their 3D nano-architectures, for safer, more powerful and less expensive batteries and for flexible supercapacitor applications. The research is described in two papers published recently in the journals ACS Applied Materials & Interfaces and Advanced Materials Interfaces Wiley.

All batteries produce current in the same way – through an electrochemical reaction involving electrodes (an anode and a cathode) and electrolyte. In a rechargeable battery, the reaction is reversible. When electrical energy from an outside source is applied to a rechargeable battery, the negative-to-positive electron flow that occurs during discharge is reversed, and the cell’s charge is restored.

The most common and widely used rechargeable batteries are lithium-ion, where lithium is the charge carrier, moving from the negative electrode to the positive cathode. But since 2011, there has been a revival of research interest in sodium-ion batteries because of growing concerns about the availability of lithium and the increasing cost. In 2015, prices for lithium almost tripled to more than USD 20,000 a ton in just ten months.

“Sodium-ion batteries are an efficient, low-cost and sustainable alternative to the expensive lithium-ion batteries used today in most large-scale energy storage applications in renewable energy and smart grids owing to the abundance of sodium in nature compared to lithium,” said Dr. Anwer. “However, the practical applications of SIBs have been constrained­— sodium ions are nearly 25 percent larger than lithium ions, and the larger sodium ions do not fit into the crystal structure of the electrodes, where the chemical reactions take place.”

Ideally, the anode and cathode materials should be able to withstand repeated cycles of sodium storage without degradation. However, the typical anode material used in commercial lithium-ion batteries, graphite, cannot be used in SIBs as it cannot store the larger sodium ion in large quantities. The KU researchers investigated 2D nanostructured materials, such as transition-metal sulfides and hydroxides, and carbon-rich materials as possible electrode materials to overcome the limitations posed by graphite anodes and to improve the properties of rechargeable SIBs.

To overcome these key problems, and to improve molybdenum disulfide’s performance, Dr. Anwer scaled down the structure of MoS2 to ultra-thin nanosheets, and a two-dimensional crystalline form with a thickness of few atomic layers was achieved. Then they controlled the closely interconnected ultrathin molybdenum disulfide nanosheets synthesis to form a 3D marigold flower-like microstructure. Finally, they wrapped these microstructures in atomically thin sheets of graphene, forming MoS2-Graphene networks.

The high energy density SIBs would be well suited for those applications currently dominated by lithium-ion batteries, including long-range electric vehicles and power-hungry consumer electronics, reducing energy storage costs across the board.

A Flexible Electrode for Supercapacitor Application

Dr. Anwer and his co-workers also leveraged advancements in nanotechnology and 2D materials to develop flexible electrode materials for supercapacitors application. Supercapacitors have emerged as the advanced energy storage system for portable and wearable electronics due to their excellent power density, charging time and cycling life.

“The new flexible electrode displayed outstanding electrochemical performance by retaining its shape and structure under bending or compression without any fracture,” Dr. Anwer said. “The highly conductive CNT foam, which comprised a 3D network of CNTs – which are tiny cylindrical tubes made of tightly bonded carbon atoms, measuring just one atom thick walls – and the unique nanostructure design of the nickel hydroxide nanosheets, facilitated rapid ion transport near the electrode surfaces, and improved charge storage activity.”

The proposed synthesis strategies developed by Dr. Anwer and his team, which leverage 2D materials with a 3D design, reveal a unique way to fabricate promising electrode materials for energy storage devices.