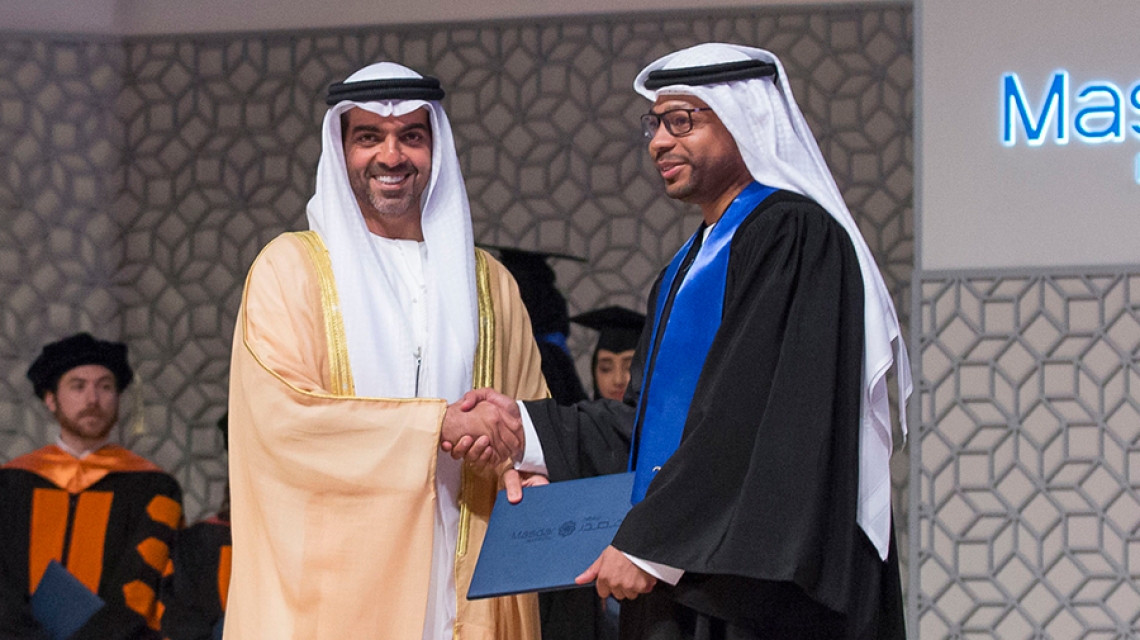 Under the patronage of His Highness Sheikh Mohamed bin Zayed Al Nahyan, Crown Prince of Abu Dhabi and Deputy Supreme Commander of the UAE Armed Forces and Chairman of the Board of Trustees of Masdar Institute of Science and Technology, His Highness Sheikh Hamed bin Zayed Al Nahyan, Chairman of Abu Dhabi Crown Prince Court and Member of the Executive Council, and His Excellency Sheikh Nahyan bin Mubarak Al Nahyan, Minister of Culture and Knowledge Development, today attended the graduation ceremony of the Masdar Institute Class of 2016.

His Highness Sheikh Hamed bin Zayed Al Nahyan presented the degrees to the graduates in Masdar Institute’s nine Master’s degree programs and its PhD in Interdisciplinary Engineering program, while His Excellency Dr. Ahmad Belhoul AlFalasi was the keynote speaker at the event, which was held at the Emirates Palace Hotel, Abu Dhabi, UAE.

His Highness Sheikh Hamed said: “The Masdar Institute Class of 2016 graduates who received their degrees today reflect the UAE’s continuing commitment to innovation and achievement. These talented young men and women will be the new generation of innovators, inventors, entrepreneurs and advanced technology leaders. I congratulate Masdar Institute and its Class of 2016 and look forward to seeing their impact on the country’s ongoing economic development and the global push for sustainability.”

His Excellency Dr. Sultan Ahmed Al Jaber said: “Intellectual and human capital development are critical to achieving the knowledge economy goals that are central to the UAE leadership’s vision for the future. At a time when the global community is striving to achieve sustainable development, Masdar Institute’s Class of 2016, will be the future leaders in the search for solutions to climate change and water and energy security, not just here in the UAE but across the world.

“With this sixth commencement, the Masdar Institute is continuing to play a leading role in the nation’s knowledge-economy transformation by providing the highly-skilled science and engineering graduates who will drive forward the country’s targeted high-tech industries and key economic sectors,” he added.

Also present on the occasion were dignitaries, ministers, ambassadors, government officials, and CEOs of private and government sector organizations, members of Masdar Institute board of trustees, and guardians of students.

In his keynote speech His Excellency Dr. AlFalasi spoke about Masdar Institute’s alignment with the UAE’s vision for a progressive and prosperous future, saying: “Progress, after all, is what Masdar Institute is all about. It is committed to advancing the cutting edge of technology; to raising the bar for research universities not just in the UAE, but across the Gulf; to driving the UAE’s innovative knowledge-economy transformation; and to producing beneficial and novel inventions. With today’s commencement, Masdar Institute is awarding Masters and Doctoral degrees to 120 qualified innovators who are trained to do just that.”

His Excellency Dr. AlFalasi then congratulated the new graduates on their commencement and urged them to continue their efforts towards even greater achievements and success.

As of May 2016 Masdar Institute has registered 10 US patents, 71 pending patent applications, and 122 invention disclosures from faculty and students, firmly establishing the Institute’s place as a leader in intellectual capital development in the UAE. The research-based institution also published over 1,000 articles in peer-reviewed journals, and more than 500 conference papers, as of January 2016.

In December 2014, the US News & World Report ranked Masdar Institute top in the ‘field-weighted citation impact’ category for its inaugural ‘Best Arab Region Universities’ listing of 91 institutions across 16 countries. Masdar Institute was also ranked second in the ‘percentage of total publications in the top 10 percent’ category, third in the ‘percentage of total publications in top 25 percent’ category and ranked 6th in the ‘energy’ subject area. Driving strategic collaborations with government and international private sector partners, Masdar Institute has so far secured over US$72 million (around AED264 million) in industry and government sponsored research contracts with more than 50 organizations (50% in the UAE), with a strong pipeline of new agreements planned for the upcoming year.

Two research projects with the UAE’s national airline Etihad Airways – one for a new design for a smart, temperature-controlled, sustainable and energy-efficient air cargo container (cool dolly) system and the other for a fog detection software system – were among the new and highly relevant collaborative research undertakings Masdar Institute launched this year with local partners.

The institute also launched the region’s first MSc Concentration in Space Systems and Technology in collaboration with YahSat and Orbital ATK, in contribution to the UAE’s space sector ambitions.

Another leading Masdar Institute research collaboration was awarded Oil and Gas Year’s 2016 ‘Partnership of the Year’ award. The Digital Rock Physics (DRP) project, with partners including Abu Dhabi National Oil Company (ADNOC), French energy firm Total, and the Petroleum Institute, aims to understand how hydrocarbons move through the tiny pores of Abu Dhabi’s heterogeneous carbonate reservoirs. The project is expected to enhance knowledge of the pore network and pore morphology of Abu Dhabi’s reservoirs from the nanoscale to macro-scale, with a view toward maximizing oil recovery.

Among the newly graduating students, Mohammed Alshehhi of the MSc in Electrical Power Engineering program won the Innovator UAE 2016 award in the Sustainability and Life Sciences category for his Smart Solar-powered Ventilation System for vehicles, at the Innovator Show 2016 organized by the Abu Dhabi Education Council (ADEC) and the Abu Dhabi Technology Development Committee (TDC).

Alshehhi also won second place in the Graduate Studies category for the same project at the seventh edition of the International Exhibition for National Security and Resilience (ISNR) Abu Dhabi 2016. His project responds to the risk of fatal distraction heatstroke accidents, which refers to incidents when children are forgotten inside parked vehicles that reach deadly temperatures during the summer months. The awards further demonstrate the social relevance of the research projects undertaken by Masdar Institute students.

MSc in Engineering Systems and Management graduate Jean Phelippe Ramos de Oliveira won first place at a university challenge hosted by Emirates NBD for his innovative “one-click-to-go” mobile application idea that has the potential to make banking transactions faster, easier and more efficient. It would allow users to program the transaction they wish to perform at the ATM ahead of time on their smartphones, significantly reducing the amount of time spent at the ATM.

A novel innovation that can help address the UAE’s food, water and energy security concerns has been developed by Fatima Al Jallaf. Her soil fertility-enhancing biodegradable “microbeads” have the potential to improve the UAE’s ability to support farming.

Aleksandar Abu Samra, an MSc in Sustainable Critical Infrastructure graduate, was part of a team that won the ‘Best Embodiment of Values and Ethics’ prize at the inaugural ‘Al Jazeera Canvas Hackathon 2014’ in Doha for developing Acumen, a Google Chrome web browser extension. The extension makes news and media more unprejudiced for readers by introducing a tool for detecting potential bias via information on the content, author background and audience reading the work.

The year also saw Dr. Linda Zou, Masdar Institute Professor of Chemical and Environmental Engineering, receiving one of three cooperative research grants at the first edition of the UAE Rain Enhancement Program grant worth US$5 million, launched by the UAE Ministry of Presidential Affairs in collaboration with the UAE National Centre of Meteorology and Seismology (NCMS). Dr Zou received the award for her innovative research proposal on using nanotechnology to develop novel cloud seeding materials for enhanced rainfall in arid and semi-arid regions.

Masdar Institute faculty also received six ADEC Awards for Research Excellence (A2RE) 2015 for the quality, originality and feasibility of their research proposals and their relevance to strategic sectors in the UAE. These awards further illustrate the extent of Masdar Institute’s strategically important research focus.

A major on-campus event was the launch of the new Masdar Institute Solar Platform (MISP), a concentrating solar power (CSP) research facility designed to advance innovative and cutting-edge CSP and thermal energy storage technologies. The MISP aims to develop and leverage both human capital and solar resources to increase the implementation and utilization of CSP and thermal energy storage in the UAE, both required to fully utilize concentrated solar energy for large-scale power generation.

Another key event was the Sustainable Bioenergy Research Consortium’s (SBRC) launch of its Seawater and Energy Agricultural Systems (SEAS) at Masdar City, the world’s first research facility to grow both food and fuel, using desert lands irrigated by seawater on a two-hectare site adjacent to the Masdar Institute campus. The facility uses coastal seawater to raise fish and shrimp for food, from which nutrient-rich wastewater is used to fertilize local plants rich in oils, which are later harvested for aviation biofuel production.

Masdar Institute’s recent contributions to sustainability included the Middle East launch of the ‘Green-to-Scale’ report, which assesses a number of readily available, high-impact climate change mitigation solutions from around the world and analyses the scope of their implementation at a global scale. The work was conducted in collaboration with independent public Finnish think-tank Sitra, and other global stakeholders.

Illustrating its role advancing clean energy prospects, Masdar Institute also launched the Photovoltaic (PV) Performance Simulator, a web-based geographic information systems (GIS) tool for modelling and simulating the performance of utility-scale PV power stations in the UAE. The first tool of its kind available for the solar PV industry in the UAE tool will be useful for solar plant developers and investors to simulate the performance of future plants with different solar technologies, allowing them to make better-informed choices regarding both the technology and location for future solar energy plants.

Masdar Institute also collaborated with The Brookings Institution in Washington to release the study titled ‘Reforming Energy Subsidies – Initial Lessons from the United Arab Emirates,’ which sheds light on the measures currently being undertaken by the UAE to establish itself as a leader in regional energy subsidy reforms.

Other collaborations established in the past year include a collaborative research program in graphene/2D materials with the University of Manchester, UK. The three initial projects launched to initiate the collaboration will explore the development of novel low-density graphene-based foams for various engineering applications, inkjet-printed graphene micro-sensors for energy and defense applications, and graphene-enabled ion exchange membranes for desalination.

Another research collaboration with leading global water technology provider Xylem aims to establish sustainability indicators such as energy and cost performance of processes and equipment for water, wastewater and water transport and treatment facilities in Abu Dhabi. The collaboration is a further step forward in Masdar Institute’s focus on achieving a leadership position in water research and development.