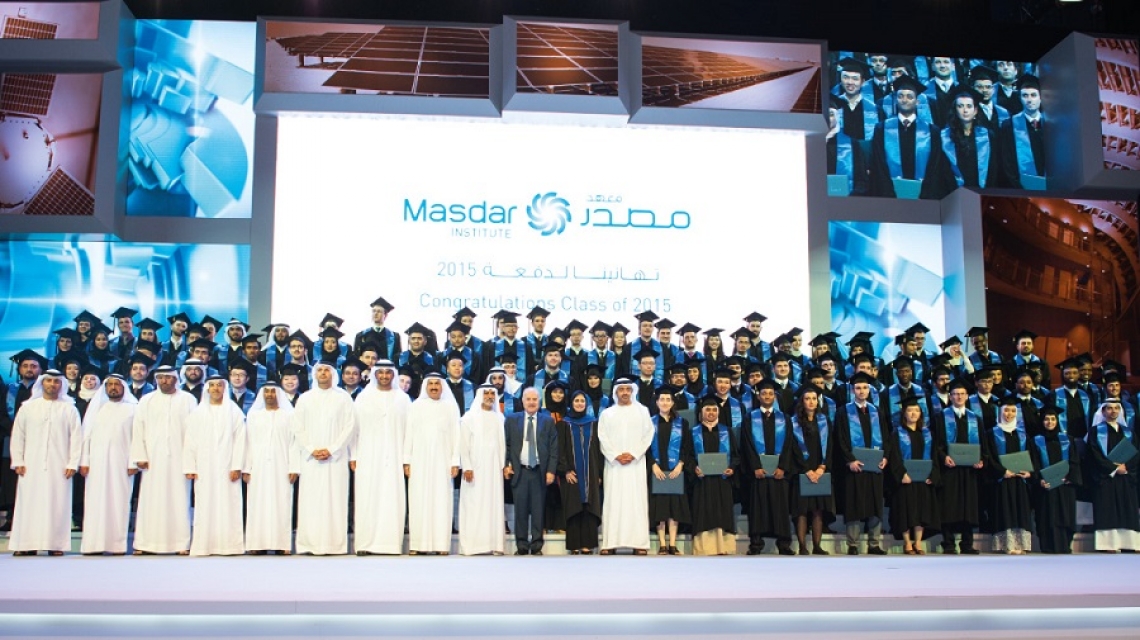 ABU DHABI: 26 May, 2015 – Under the patronage of His Highness General Sheikh Mohamed bin Zayed Al Nahyan, Crown Prince of Abu Dhabi and Deputy Supreme Commander of the UAE Armed Forces and Chairman of the Board of Trustees of Masdar Institute, His Highness Sheikh Abdullah bin Zayed Al Nahyan, UAE Minister of Foreign Affairs, His Excellency Sheikh Nahyan bin Mubarak Al Nahyan, Minister of Culture, Youth, and Community Development, and others, today attended the graduation ceremony of the Masdar Institute of Science and Technology Class of 2015.

In his keynote speech, His Highness Sheikh Abdullah said that Masdar Institute’s Class of 2015 commencement was a testament to the efforts being undertaken to achieve the country’s National Innovation Strategy goals, which require high-value human capital to advance the key high-tech sectors targeted in the strategy.

His Highness Sheikh Abdullah said, “As a member of Masdar Institute’s Board of Trustees, I have witnessed the results of its commitment to laying the foundation for the UAE’s global technology leadership. Its faculty, students and researchers have produced six full patents, with dozens more in the pipeline. Its research has appeared in hundreds of papers published by leading scientific journals. Its name has been illuminated through numerous awards, including a Medal of Top Emiratis for one pioneering student researcher… But the greatest proof of Masdar Institute’s value to the UAE’s economic vision isn’t its remarkable facilities or labs. It is you, the graduates, the Masdar Institute Class of 2015.”

He thanked His Highness Sheikh Khalifa bin Zayed Al Nahyan, UAE President and Supreme Commander of the UAE Armed Forces, for leading the country towards such a future full of innovation and prosperity.

He also thanked His Highness Sheikh Mohamed bin Zayed Al Nahyan, Crown Prince of Abu Dhabi and Deputy Supreme Commander of the UAE Armed Forces, for his tireless efforts to support and develop that future.

Dr. Sultan Al Jaber said, “Masdar Institute has been playing a critical role in the UAE’s knowledge-economy transformation since it was established in 2007. Following the announcement by the UAE leadership of the National Innovation Strategy, Masdar Institute has strengthened its focus on supporting the innovative capacity of the UAE in key economic sectors.

“With this fifth commencement taking place in the UAE’s Year of Innovation, Masdar Institute is making a sizeable contribution to those sectors and the country’s overall innovation ecosystem, providing the highly-skilled engineering graduates who will drive the country’s targeted high-tech industries,” he added.

Speaking at the commencement, Dr. Behjat AlYousuf, Interim Provost, Masdar Institute, said: “With every passing graduation, our alumni have somehow managed to improve upon the last. Each year, we seem to attract more and more talented young men and women; young men and women who are willing to meet our strict academic requirements; who recognize the value and importance of our mission and want to learn how to change the world. (They) inspire me and give me hope that the world can achieve its necessary sustainability goals.”

Within a few years since inception, Masdar Institute has built a reputation as a leader in locally relevant and world-class research innovation by nurturing talented faculty and students, equipping them with the resources they need and connecting them with academia, government and private sector research partners.

Masdar Institute’s notable research outcomes have helped it secure the number one ranking in university research citation impact category for the Arab region in the 2015 US News and World Report rankings.

A number of Masdar Institute’s Class of 2015 graduates have concluded their research thesis on issues of strategic relevance and economic value to the UAE. These areas include clean energy, advanced technology, and water-related technologies. In 2015 alone, faculty and students have more than doubled Masdar Institute’s issued US patents to six and those in the pipeline now include 54 pending patent applications and 96 invention disclosures, thus firmly establishing their place as leaders in the development of intellectual capital.

UAE national Faisal Al Marzooqi was the first Masdar Institute PhD student cleared to graduate after successfully defending his dissertation focused on a novel desalination membrane that he developed. A technology patent resulting from Al Marzooqi‘s thesis is now pending with the US Patents Office. Another UAE national PhD student Aamena Ali Alshamsi’s thesis covers some of the highly technical aspects of ‘Big Data’ and explores the possibilities of using social media and mobile phones to understand what makes society happy. The findings could be used to provide real-time analytics about individuals and collectives for timely intervention by decision-makers. They could also be leveraged to build productive teams and design informed strategies to achieve desirable goals in many aspects, including sustainability.

The Class of 2015 graduates are expected to apply the knowledge and expertise gained during their Masdar Institute studies to advancing technology, research, government, academia and entrepreneurship, here in the UAE and abroad. Masdar Institute has successfully facilitated placement of 96% of its previous graduating class who now serve as innovation leaders at organizations and institutions including Microsoft, GE, YahSat, Mubadala, Ministry of Foreign Affairs (MOFA), Siemens, and the Emirates Nuclear Energy Corporation (ENEC). Some are also currently with leading universities including the University of California-Los Angeles (UCLA), MIT, NYU, UC Berkeley, UT Austin, and Imperial College, London, as faculty or PhD students.

Masdar Institute held its first graduation in June 2011, where more than 70 students graduated. With the fifth commencement now, the total number of Masdar Institute graduates has crossed the 400 mark.