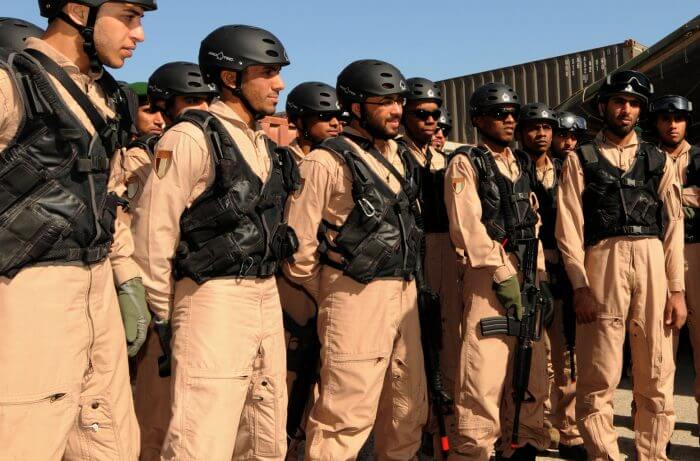 While civil security is a responsibility for every country, there are some unique challenges faced in the Middle East and by the UAE in particular. When KU launched the Master’s program in International and Civil Security, the mission was to impart a deep understanding of these threats and develop in students the knowledge and skills to address them.

There was just one problem:

“When I came to Khalifa University in 2013 to teach civil security (called homeland security in the US), all the course material was on the US and the UK,” explained Dr. Yates. “This made it uninteresting for our students.”

“So for the last six years, I have been building up material on security in the UAE, which I use in my classes now,” said Dr. Yates.

Like any country, the UAE has had its share of criminals, accidents, natural disasters and “downright weird incidents,” as Dr. Yates calls it. Having found few academic accounts of the civil security history in the UAE, Dr. Yates and a team of volunteers turned their attention to historic media coverage, scouring newspapers from the earliest days of the UAE. The book Catastrophes, Crashes and Crimes in the UAE covers a selection of the most fascinating stories from publications like the Gulf Weekly Mirror, Abu Dhabi News, and more which are now defunct.

“I now use this book as a primer on the types of security incidents and disasters which the UAE has faced in the past,” said Dr. Yates. “The second book in this series will soon be ready for printing.”

Catastrophes, crashes and crimes are one aspect of civil security well covered by the degree program at KU and disaster response strategies are crucial for the continuing safety of the residents here. Natural disasters can be unpredictable yet require immediate response — while the UAE is fortunate enough to not regularly face the earthquakes, cyclones and tsunamis assaulting other countries, having a stout and comprehensive response strategy is imperative to the nation’s security should something occur. Research involving Dr. Yates and his colleagues at the KU Institute of International and Civil Security takes a multidisciplinary approach to addressing both the potential disruptions to the national infrastructure for food and water supply and the safety and security of its people and government.

Beyond the risk of natural disasters, there are some delicate security issues in the region: political tensions, warfare, weapons of mass destruction, and terrorism plague the globe and pose a unique threat to the nation. The UAE is one of the safest countries in the region, with the national agenda index in 2018 finding 96.1 percent of the population feeling safe and secure. Keeping the people safe is an issue of national importance.

Integral to this mission is the UAE military.

“The last three years have seen me focusing on UAE military history,” continued Dr. Yates. “This has led to me being invited to give talks on it, such as at the National University of Singapore (NUS).”

Today, the UAE Armed Forces is probably the best military in the Arab world. “Given its population of just one million citizens and a land area the size of Scotland, this is a substantial achievement,” added Dr. Yates. In an upcoming presentation at the NUS Middle East Institute, Dr. Yates will explain how the first locally-controlled military formed in 1965 grew so rapidly in size and capability to the point that by the late 1970s, the nation fielded supersonic jets, modern armored vehicles, and Exocet-equipped fast attack craft — a substantial achievement for a nation whose inhabitants lived a subsistence lifestyle with little education, health services, roads, piped water or even electricity until the early 1960s.

“I have now published two books on military history, with the chief of the UAE Navy writing the foreword for the naval book,” said Dr. Yates. “However, my major academic book is The Evolution of the UAE Armed Forces which is due out in a few months.”

While the military today is central to the nation’s development, just 60 years ago, the only security forces in the Emirates were the armed retainers of the Ruling Sheikhs and a small British-led, locally-raised Arab force, as Dr. Yates explains in his upcoming book. “Using a combination of investment in its nationals, oversight by the Rulers, engagement of expatriates and the purchase of cutting edge military hardware, the UAE Armed Forces has become the Arab region’s most capable military.”

The UAE military has some unique characteristics which make it markedly different from other militaries, notably the direct and personal involvement of the country’s leadership, a preference for the most advanced hardware, a multi-country equipment sourcing strategy, huge investment in human capital, and the engagement of expatriates to build capability through the transfer of knowledge.

Dr. Yate’s forthcoming book, The Evolution of the UAE Armed Forces, provides “unparalleled detail on the constituent forces that evolved into the UAE Armed Forces in 1976, and how the unified force has grown since then” alongside details on the politic and command structure governing the military and its enduring roles and history. The book is due out at the end of 2019.