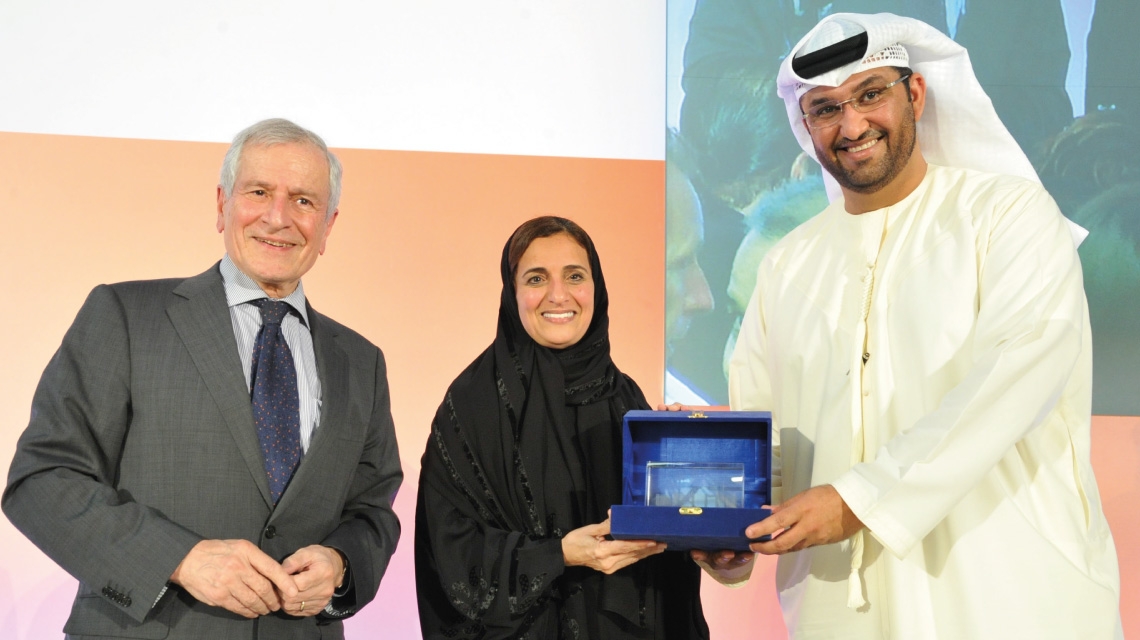 Delivering a lecture titled ‘Towards Sustainability: The Role Of The UAE As A Key Player In Global Human Development’, Her Excellency Sheikha Lubna added that the UAE’s initiatives are the outcome of the vision and commitment of the leadership to widen the country’s contribution to sustainable development goals. Sustainable development goals are expected to be adopted as the next stage of action for the eight MGDs by the United Nation’s member states at a summit in September 2015.

The lecture was organized under the Distinguished Lecture Series at the Masdar Institute campus. Her Excellency Sheikha Lubna was earlier received by Dr. Fred Moavenzadeh, President, Masdar Institute, who introduced her to the audience. A number of government, non-government and private sector stakeholders including His Excellency Dr. Sultan Al Jaber, UAE Minister of State, Chief Executive Officer of Energy at Mubadala and Chairman of Masdar, His Excellency Philip Parham, British Ambassador to the UAE and official representatives from United Nations in the UAE were present. Students, faculty and staff members from Masdar Institute and other universities also attended the lecture.

During her talk Her Excellency Sheikha Lubna pointed out that the UAE remains committed to helping partner countries achieve their MDGs through the delivery of foreign aid in the form humanitarian and development assistance. The country also prioritizes ‘developing global partnerships for development’ and ‘eradication of poverty and hunger’, while seeking to achieve the MDGs locally. She emphasized that the programs and projects initiated by the UAE leadership in poor countries will contribute to improved food supply, greater environmental sustainability and biodiversity conservation, as well as better water management, child vaccination campaigns and meaningful support for global polio eradication efforts.

Her Excellency Sheikha Lubna added: “As part of its contribution towards achieving sustainable development goals, the UAE specifically will endeavor to address the causes of poverty including conflict, fragile statehood, social exclusion, economic under-performance, under-mobilization of national resources in poor countries, inadequate governance and under-investment in education and health.”

According to the UN 2013 MDG report, there are new and emerging global challenges. Annual earth depletion has jumped from 60% in 1990 to an alarming 150% in 2010, while the bottom billion of the world’s population is severely impacted by widespread deprivation despite progress towards MDGs. The challenge is growing manifold since the earth’s population is forecast to reach eight to 10 billion by 2050, the report adds.