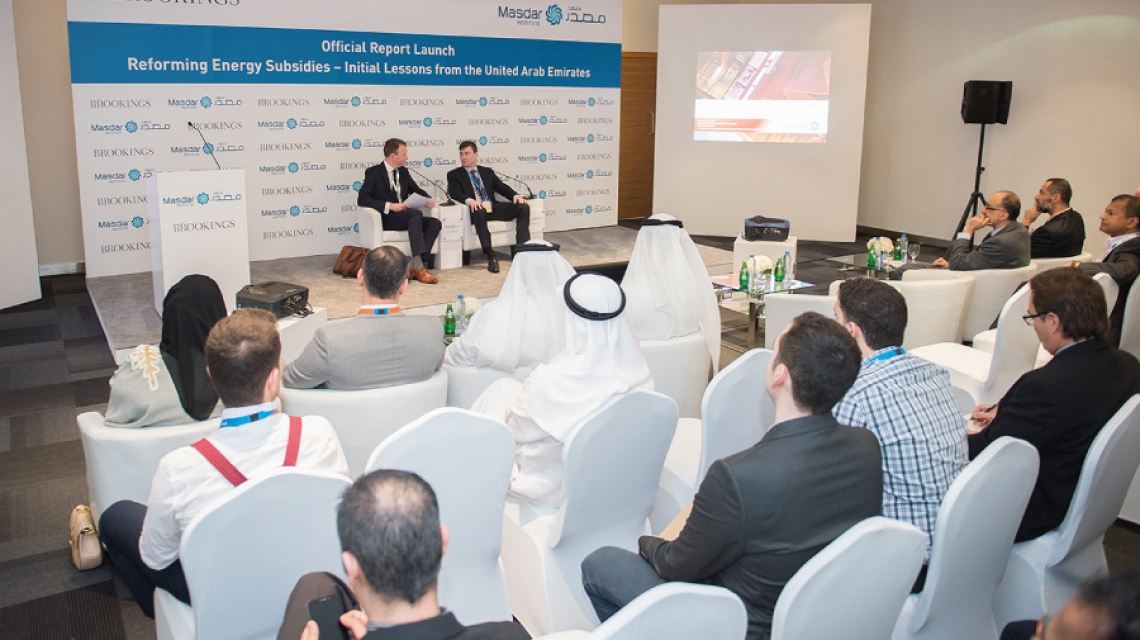 The UAE has taken very meaningful initial steps to reform existing energy subsidy schemes, says a joint study conducted by the Washington D.C.-based Brookings Institution and the Masdar Institute of Science and Technology.

The Brookings-Masdar Institute study was released at an event held on the sidelines of the World Future Energy Summit (WFES), which is being organized as part of the Abu Dhabi Sustainable Week (ADSW) 2016 at the Abu Dhabi National Exhibition Center (ADNEC). In addition to guests, senior officials and faculty from the Brookings Institution and Masdar Institute attended the ceremony.

The study says that while modest electricity, water and fuel reforms are already underway in the UAE, the jury is still out on the long-term impact since many of the reform measures are relatively recent. However, it points out that there has not been much sign of social backlash to the reforms and the reforms implemented in Dubai in 2011 did seem to a have at least a short term impact on power and water consumption. The study further emphasizes that the example set by the UAE can provide important lessons regarding energy subsidy reforms in hydrocarbon-exporting countries and the wider Middle East and North Africa (MENA) region.

Subsidy reforms have become particularly topical following the fall in oil revenues witnessed in the UAE and other oil exporting countries. World oil prices are currently near an 11-year low as benchmark Brent crude has more than halved from over US$100 a barrel 18 months ago, pressured by a supply glut that exceeds two million barrels per day, according to figures from the Organization of Petroleum Exporting Countries (OPEC).

Dr. Tim Boersma said, “There are several good reasons why energy subsidies are undesirable. Of course reforms do not have to take place overnight, and the UAE authorities have, partially facilitated by its rather unique demographic structure, shown one way of successfully implementing new policies. Hopefully the leadership can continue efforts to reform in the coming years.”

Dr. Griffiths said, “Energy subsidy reform the GCC countries has long been discussed and the UAE has taken a very good approach to making this happen. The move toward reform was well communicated prior to implementation and the basis for transport fuel pricing follows international best practice in transparency. Although the recent fall in international oil prices has created a challenge for government revenues, the UAE’s leadership has turned the challenge into an opportunity by implementing subsidy reform measures that will have long-term benefits for the country with minimized short run impact on consumers”

Quoting ‘The Economist,’ which called 31 July 2015 a ‘day of reckoning for fuel prices in the Gulf,’ the Brookings-Masdar Institute study says reforms were incentivized by the significant burden that subsidies put on state coffers, estimated at US$7 billion in 2013 alone for petrol and diesel subsidies. In August 2015, the UAE became the first country in the Arabian Gulf region to remove transport fuel subsidies. The government now sets the prices based on international benchmarks and announces them on the 28th day of each month.

While highlighting the fact that the UAE’s subsidy reforms in the power and water sector provide an important market signal, the Brookings-Masdar Institute study emphasizes that prices remain low by international standards and therefore must be complemented by broader demand-side management strategies to significantly curtail consumption, particularly during times of peak demand. Nonetheless, the study welcomes the current “visible” initiatives undertaken in the UAE as an effort to move toward cost reflective pricing for power, water and fuel in the GCC.

“The UAE (reform) initiatives underline that hydrocarbon wealth must be exploited for optimal purposes and that excludes indefinite underpricing of hydrocarbon resource utilization,” concludes the Brookings-Masdar Institute study.

The Brookings-Masdar Institute analysis is based on analysis of UAE energy sector data as well as primary and secondary data derived from a series of interviews with a wide variety of stakeholders in both Abu Dhabi and Dubai, including industry representatives, regulatory authorities, policy makers, financial specialists, analysts, and representatives of NGOs.

The oil and gas sector contributed 34.3% to the UAE’s gross domestic product (GDP) in 2014 at current prices, according to the UAE National Bureau of Statistics. With lower oil prices, the UAE may have a fiscal budget deficit for the first time since 2009, an International Monetary Fund (IMF) report has predicted. Nonetheless, lower oil prices present the opportunity to adjust fuel prices to market levels since the impact on consumers is much less while they digest the reality of reforms.

The IMF and other observers of the region have been calling on GCC countries for years to reduce energy subsidies in order to safeguard the medium- to long-term sustainability of public finances, support diversification and remove misallocations and distortions in the economy. The UAE has taken positive steps in this direction.