The pursuit of grid parity 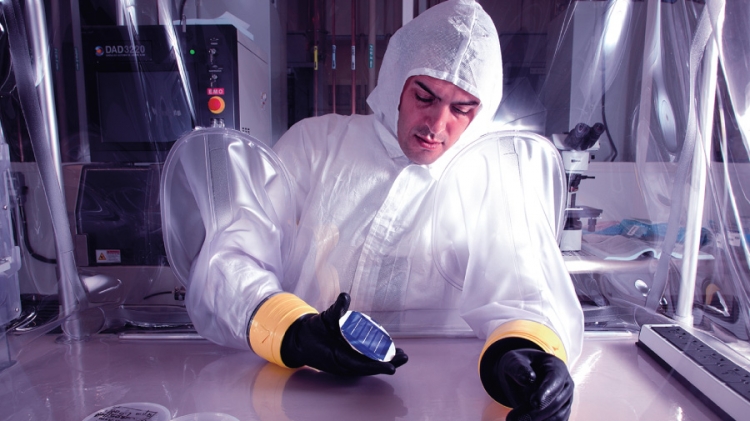 Solar energy may have the greatest potential of all renewable energy sources – and yet still it represents less than 1 per cent of the world’s energy. The main reason for this has been the challenge of making it cheap enough to compete.

In Abu Dhabi, scientists at the Masdar Institute of Science and Technology are working to make solar technologies not only more efficient, but also cheaper to fabricate.

Photovoltaic technology, most commonly based on silicon, is the oldest of the solar power harvesting technologies in use today.

Conventional cells use crystalline silicon; but silicon is in great demand, and expensive, as it is also used to make computer chips. That contributes to a high per-watt cost for photovoltaic-sourced energy.

It has fallen steeply, from US $6 per watt-peak (Wp) – a measure of the cell’s power-generating potential – 20 years ago, to as low as $1.70 now. But to make it competitive with non-renewable energy, we need to get that down to $1. Even a little higher, and the technology will never make the mainstream.

Hence my research is focusing on critical incremental improvements in the way in which this technology is implemented and functions.

Our work examines the various stages of production of silicon-based cells to pinpoint where new and more efficient methods can be introduced.

The silicon wafers used in photovoltaic cells are a big part of their cost. We are looking at how to reduce the consumption of these wafers, by targeting the use of thinner wafers without losing operational efficiency.

We are for example working to reduce the amount of chemicals used in cleaning the same wafers, as well as reducing the amount of metal used in the making of the electrodes on the cells – which would have the side benefit of making production less environmentally damaging.

The more cost-effective technologies currently available use some chemicals, such as cadmium, which have useful properties but are highly toxic.

We are trying to find the right balance between function and cost.

We are also investigating improved cell concepts that are less energy intensive, including one using a form of silicon known as amorphous silicon, which has a less tightly ordered molecular structure than the crystalline silicon currently used.

The goal is to reduce the overall cell production process time and complexity, without sacrificing the output of the solar panel.

This technology was developed a few years ago in Japan, but the reported efficiency – of as much as 23 per cent – has proved difficult to match and the cost of the panel is still on the high end.

Still, we are hoping to manage solar cell efficiency of 18 to 19 per cent in the near future, and I am confident that we will be able to achieve grid parity for photovoltaic technologies before the end of this decade.

Dr. Adel Gougam is an assistant professor of materials science and engineering at the Masdar Institute of Science and Technology
http://www.thenational.ae/news/uae-news/masdar-and-the-pursuit-of-grid-parity