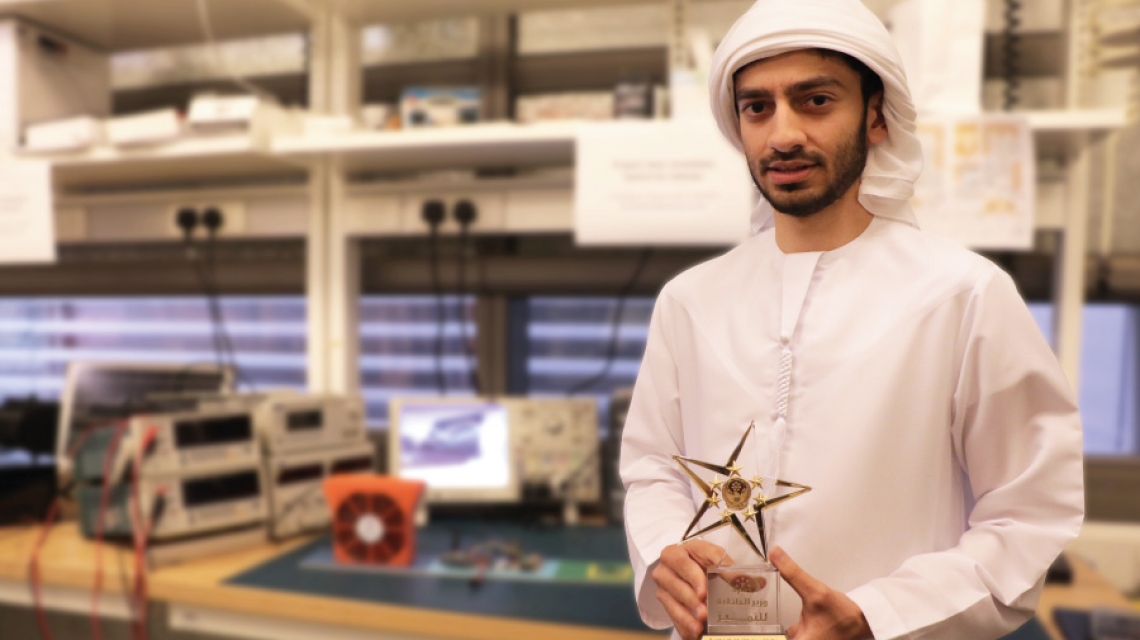 A project developed by Mohammed Alshehhi, an Electrical Power Engineering student, has won two awards – the Ministry of Interior award in the Graduate Studies category and the Innovator Show 2016 award in the ‘Sustainability & Life Sciences’ category. The project aims to help save the lives of children forgotten inside locked vehicles, by alerting the parents and civic authorities.

Lt. General His Highness Sheikh Saif bin Zayed Al Nahyan, Deputy Prime Minister and Minister of Interior, presented the award for second place in the Graduate Studies category to Alshehhi at the seventh edition of the International Exhibition for National Security and Resilience (ISNR) Abu Dhabi 2016 that was held from 15-17 March at the Abu Dhabi National Exhibitions Centre (ADNEC).

Alshehhi has also won the award for the same project titled “Smart Solar-Powered Ventilation System for Vehicles,” in the third cycle of the Innovator Show. His project responds to the risk of fatal distraction heatstroke accidents, which refers to incidents when children are forgotten inside parked vehicles that reach deadly temperatures during the summer months.

Alshehhi’s project aims to keep vehicles cool by using solar power to operate an independent ventilation system. The system also can automatically send a text message (SMS) to parents if they forget their child in the vehicle. Additionally, in case the parents do not respond to the message within a set period of time, the system will then automatically send another SMS alert to nearby police station/Civil Defense, providing information about the parents’ phone number, the vehicle’s plate number and its location, for prompt emergency services response.

Dr. Behjat Al Yousuf, Interim Provost of Masdar Institute, said: “We are very proud of Mohammed Alshehhi for developing this innovative and potentially life-saving technology, which has won the UAE Innovator Show award in the Sustainability & Life Sciences category and the Ministry of Interior Graduate Studies category. His solar-powered car cooling system and sensor is a perfect example of the kind of positive and creative research being conducted at Masdar Institute to bring social benefits to the UAE and wider world.”

A prototype of the “Smart Solar-Powered Ventilation System for Vehicles” has already been developed by Alshehhi and further tests are currently ongoing at Masdar Institute.

Statistics indicate hundreds of children are mistakenly left in cars every year, which can prove fatal during the UAE’s hot summer months. In most cases, loss of life is attributed to parental negligence, which can be avoided if appropriate preventive steps are initiated in time. Alshehhi’s project ensures a car never reaches those dangerous temperature levels, and if a child is forgotten inside, parents and authorities can quickly be informed.

Dr. Weidong Xiao, Associate Professor, Electrical Engineering and Computer Science, and Alshehhi’s faculty adviser, said: “The awards reflect an important recognition for Alshehhi, who is an energetic, independent and diligent student. I congratulate Alshehhi and am sure he will be a good potential candidate to continue his PhD studies at Masdar Institute.”

Alshehhi said: “I am fortunate to work with Dr. Weidong Xiao, who assigns us with projects that requires designing real-life systems. As a UAE national, I wanted to design a PV system that responds to real-world challenges in the UAE, and would use our natural resources to our advantage. I had to think outside the box and find the proper components for designing this unique system.”

Alshehhi’s entry in the Sustainability & Life Sciences category was selected out of 117 entries in five categories from over 500 innovators who participated the competition. The Master Institute student also presented his project at the ISNR Abu Dhabi 2016.