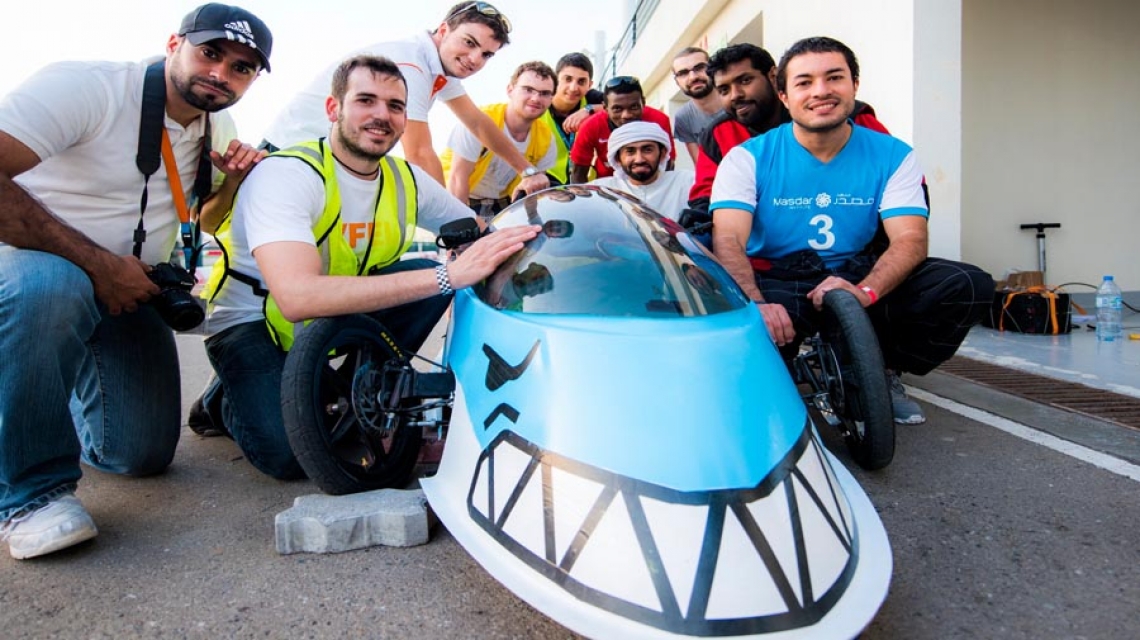 A team of Masdar Institute students and research engineers with a passion for the “cars of the future” raced their renovated electric vehicle in the 2016 Global Hybrid Electric Challenge-UAE, which was held last week in Abu Dhabi.

Led by the club’s president, Ivan Lopez, a Masdar Institute Master’s student in Mechanical Engineering, the Masdar Racing Team (formerly known as the YELA Club), worked overtime to re-build the club’s electric vehicle in time for the competition.

Combining engineering design principles, strategy and hard work, the Masdar Racing Team members learned how to design and construct the next generation of automobiles – a valuable skill that will become increasingly relevant as more electric and hybrid vehicles make their way onto UAE’s streets.

This year’s competition saw 15 teams from universities around the region – including teams from universities in the UAE, Qatar, Kuwait and Egypt – compete in two phases. In the first phase, the teams drove their vehicle for one hour using only the energy stored in the car’s battery, while in the second phase, teams used their cars as hybrid vehicles, adding petrol to boost their range to travel as far as possible in a three hour period.

During the first phase, the Masdar Racing Team completed 18 laps around the Al Forsan International race track, and completed 37 laps in the second phase.

“With donated funds, we were able to purchase a new battery, controller and display, which we used to read speed, current, remaining power and other important parameters that helped us develop a good strategy during the race,” Lopez added.

The club members – which included Asif Soopee, Uver Villalobos, Mateusz Madzik, Mutasem Odeh, Wael AL-Enezi, Miguel Diago, Adetunji Alabi, Adetola Ogungberno, Khaled Alobeidli, Alberto Crespo, Dan Cracan and Dr. Vinod Khadkikar as the faculty advisor – joined the club to learn about electric vehicles, but ended up learning a lot more, including the value of working together and how to meet deadlines in the face of obstacles.

Lopez is particularly proud of his team for their diligence and commitment to the vehicle, despite their busy schedules and heavy workloads, as many of them were preparing to defend their Master’s thesis in the lead-up to the race.

“We leveraged the diversity of our team members, capitalizing on our various strengths – some were mechanical engineers while others were electrical engineers – to solve challenges when modifying the car,” Lopez said.