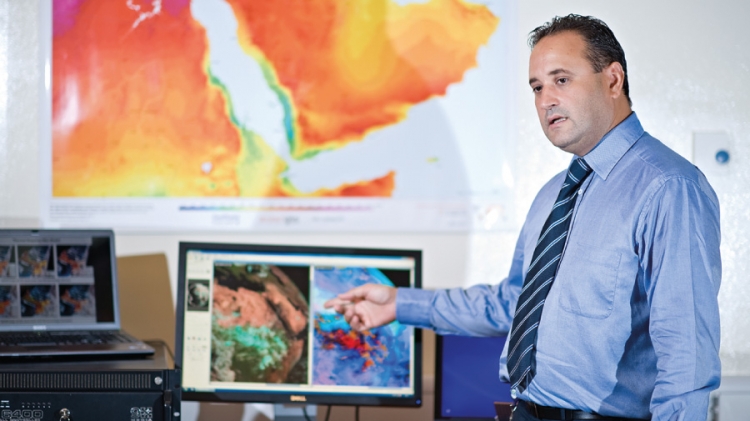 To solve a problem, you need to know what it is – and that means having the best data available to define its parameters. Otherwise, the solution may be useless, and the effort of solving it wasted.

We’ve seen a prime example of this in the field of solar energy in the UAE. Initial assessments for solar energy projects were made using data and models borrowed from Europe and North America. But that failed to take into account the Gulf’s unique climate.

While in theory, the UAE receives the same if not far more solar energy than Europe or North America, in reality the dusty atmosphere cuts out as much as 90 per cent of the sun’s energy during a heavy dust storm. Even on cloud-free days, there is often far less solar energy than might be expected for such a hot and sunny country.

To ensure future projects are more realistic, we need local data. To that end, scientists at the Masdar Institute are helping to draw up solar and wind resource atlases for the region.

Such atlases will allow us to create models based on the specific conditions in the UAE and other similar regions. They should also help attract inward investment into the renewable energy sector and underpin policy decisions on legal and financing frameworks The project will combine existing databases into one open website from which solar energy maps can be accessed. It will also provide valuable experience for university students and researchers, both to run future data collection and analysis projects and to train others to do likewise.

And the hope is for the project eventually to be expanded to other Gulf countries as well as into Africa.

To create the solar atlas, we need to account for the impact of airborne dust and vapour on solar energy. The first step is collecting data from the Masdar Institute’s satellite receiving station. It received images of the region every 15 minutes; each set of data is used to calculate the intensity of solar energy, using modified models developed and validated at the institute.

Additionally, we are using ground measurements to recalibrate existing mapping tools for our environment. Through a collaboration with Masdar Power, the team has access to six ground stations that have gathered measurements over the last four years; that gives us the ability to create critical resource simulations in near real-time.

The solar map will divide the country and its neighbours into patches three kilometres square, and giving measurements every 15 minutes foreach patch.

By simulating archived satellite data from the last 10 years, we can produce hourly, daily, monthly and yearly maps showing long term averages, annual variability – and, crucially, an indication of how reliable or otherwise those measures are likely to be in predicting future climate trends.
For the wind atlas, much of the monitoring will be among the first of its kind in the region. As there is little pre-existing wind resource data available, the analysis will initially be mainly derived from numerical models.

As you can imagine, the atlas project is complex and challenging. It spans computer sciences, civil and environmental engineering, atmospheric science and remote sensing through satellite data processing.

Our satellite receiving station captures a terabyte of image data – a full hard disk’s worth – every week, all of which must be processed in near real-time.

But its potential gains are great. In real terms, the atlases can help not only give a better overall picture of the available solar resources in the UAE and the wider region. It can also give investors clear guidance on where to build solar plants.
This will surely prove helpful in the UAE achieving its goal of getting seven per cent of its energy from renewable sources by 2020, and providing the country’s youth with a brighter and more sustainable future.

Dr Hosni Ghedira is director of the UAE Research Centre for Renewable Energy Mapping and Assessment at the Masdar Institute of Science and Technology.
http://www.thenational.ae/news/uae-news/technology/solar-atlas-can-show-the-way-to-renewable-energy-target