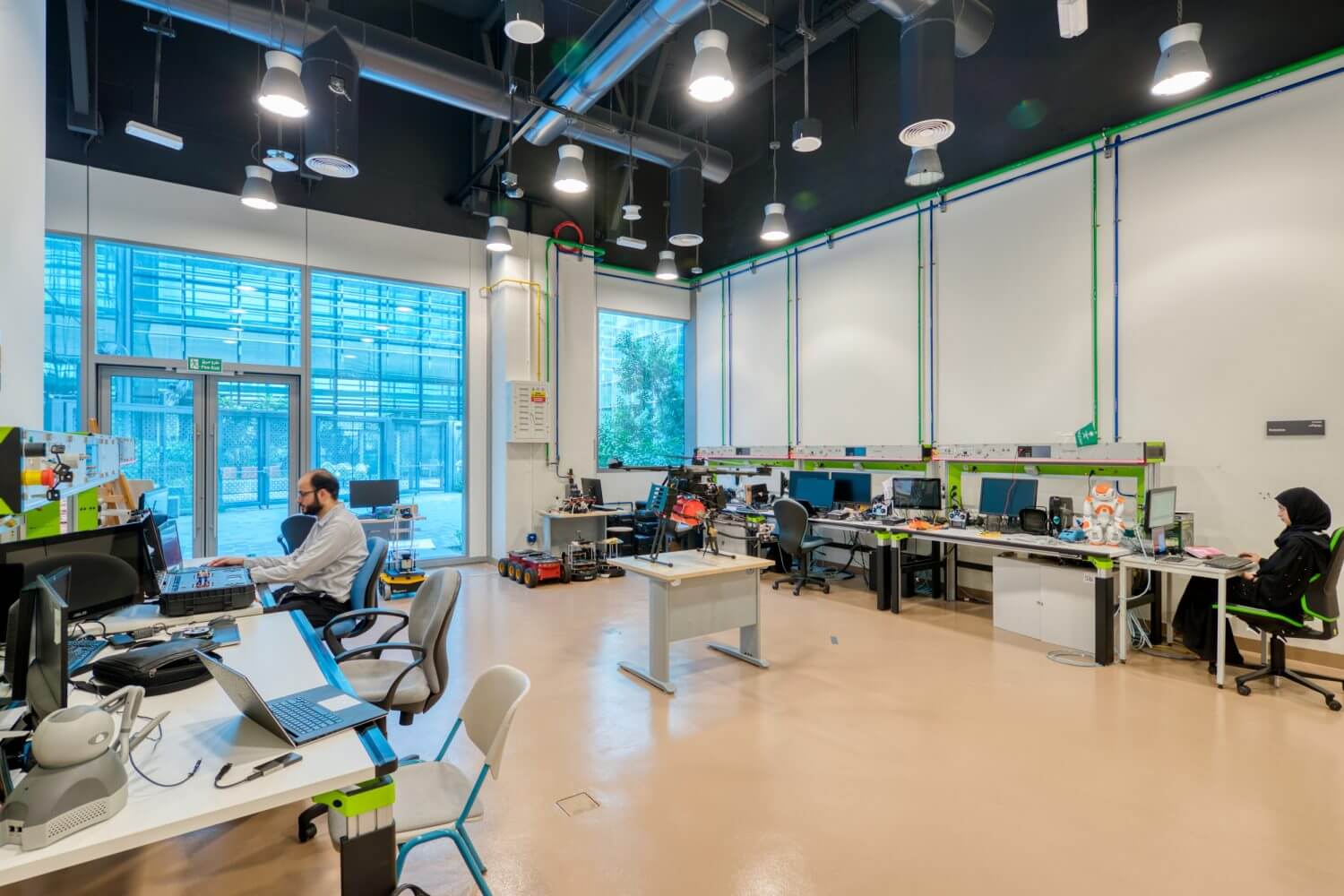 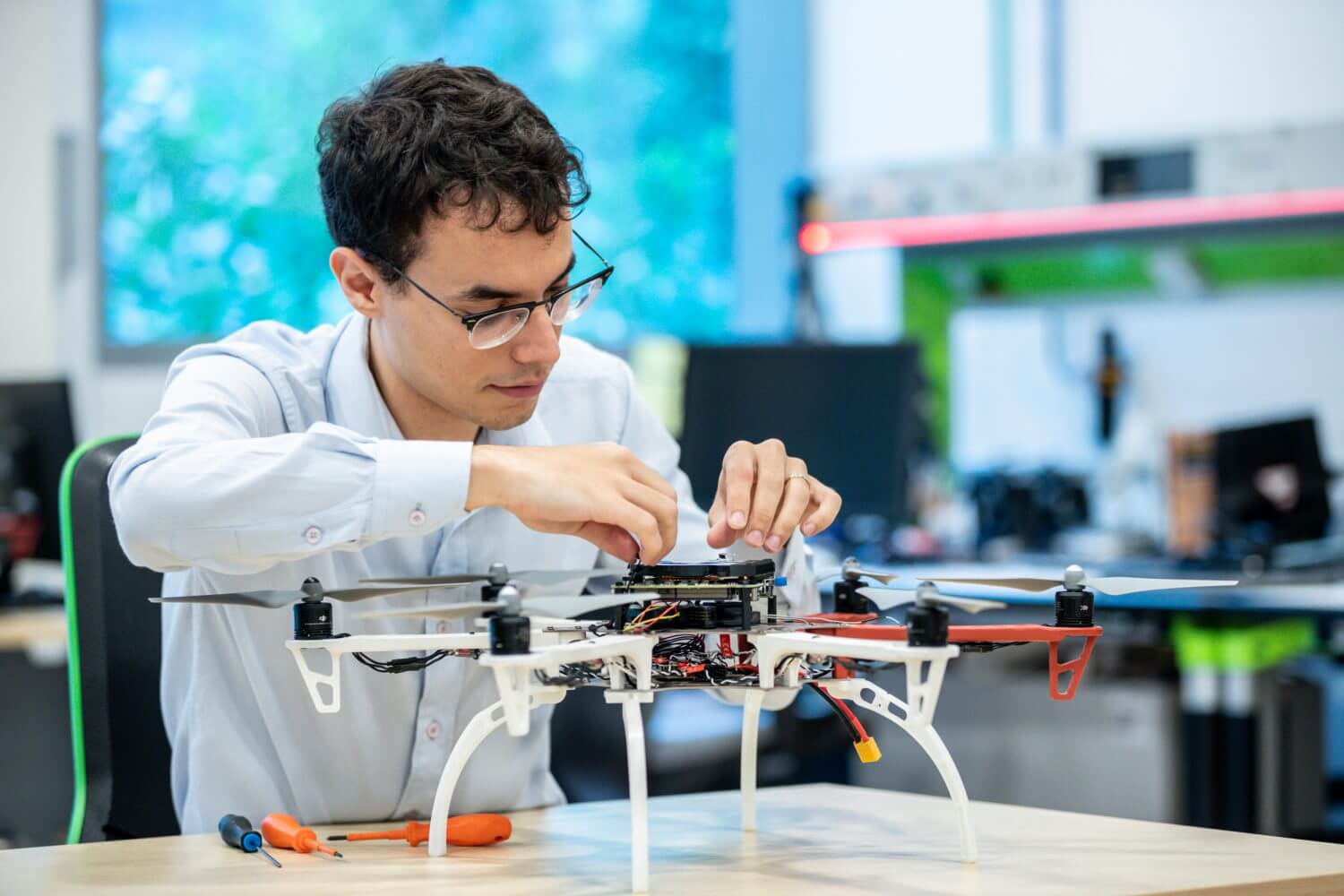 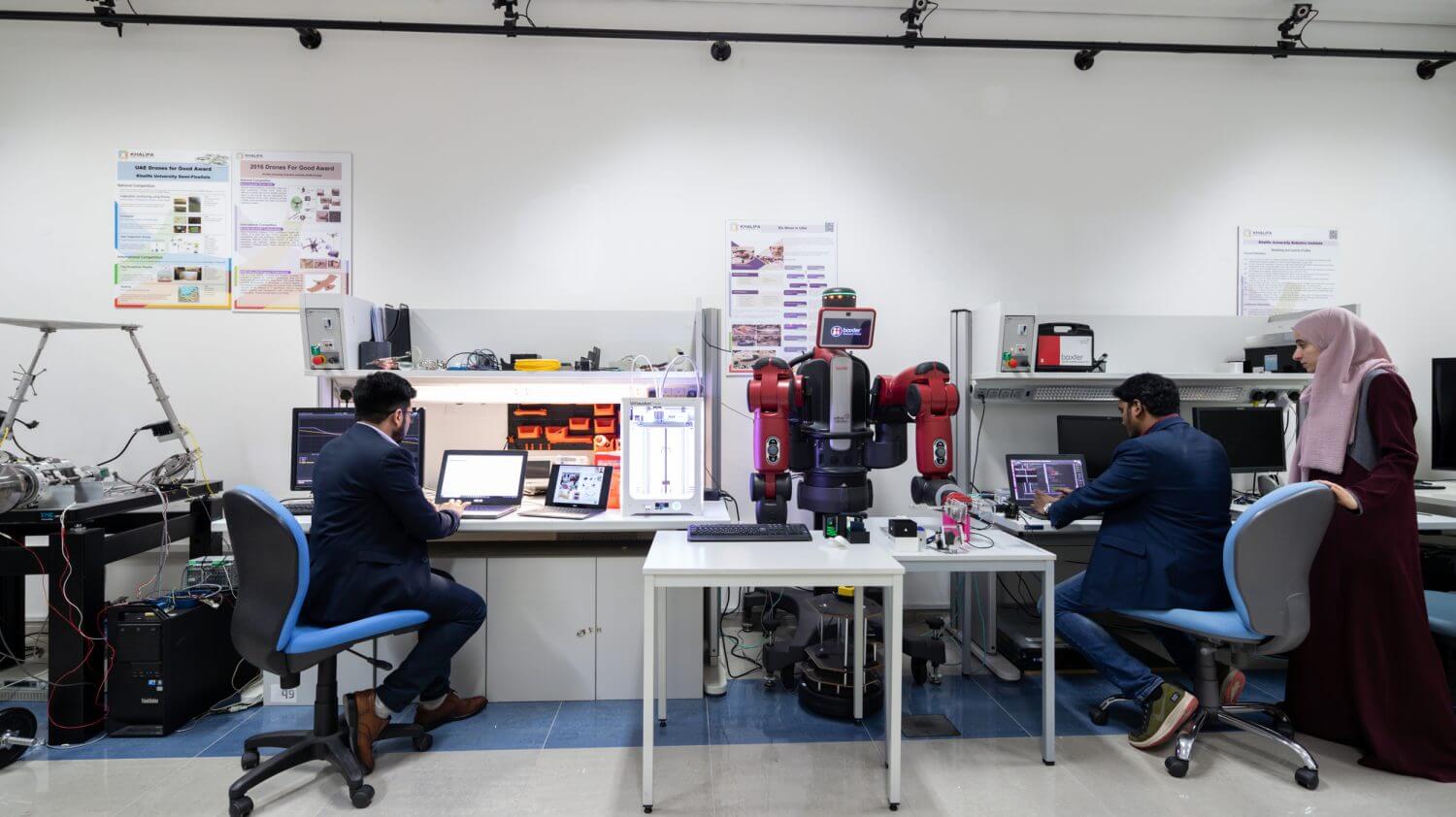 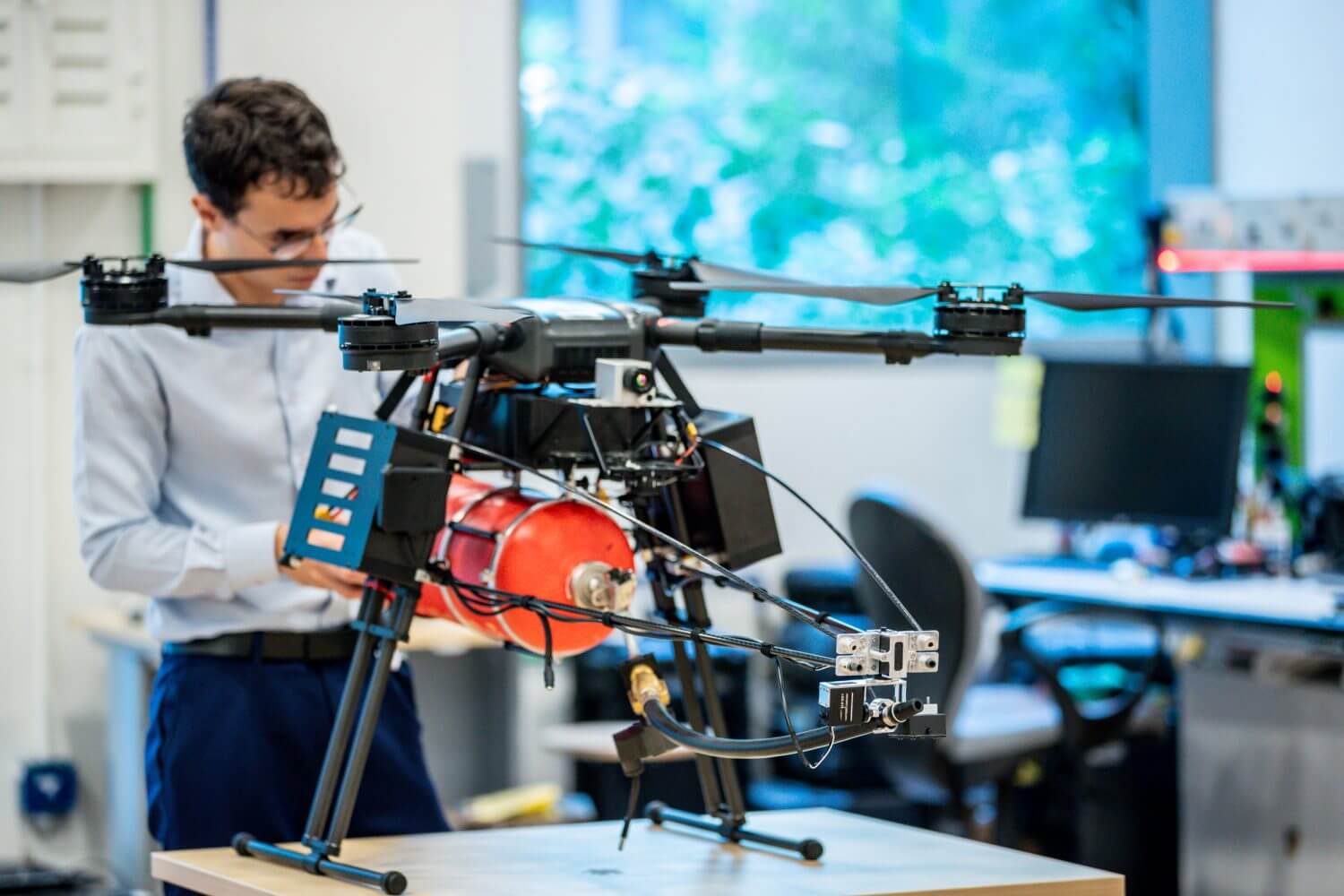 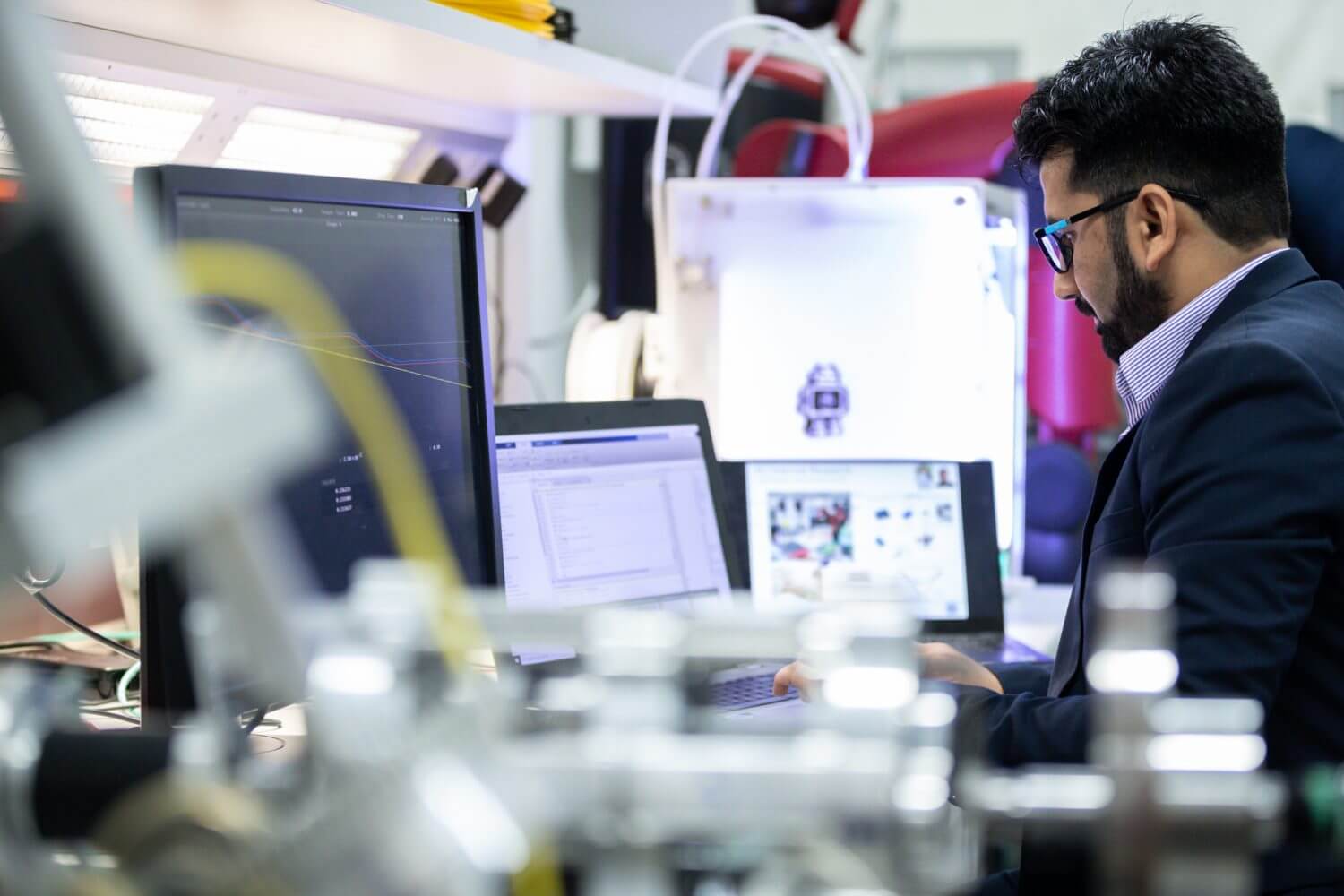 Marine Robotics testing facility  in D00058 allows testing under controlled environment that simulates the adverse environmental conditions of the sea. The facility is composed of approximately 10m x 15m pool in a 300m2 (x 8m height) lab space. To achieve this, we need an integrated wave tank system consisting of a wave generator and flow current generator and an overhanging (gantry-type) mechanism covering the whole pool width. This infrastructure will allow for extensive and controlled testing of marine robotic vehicles that could be used for testing underwater, surface and bio-robotic autonomous devices or remotely tele-operated devices. 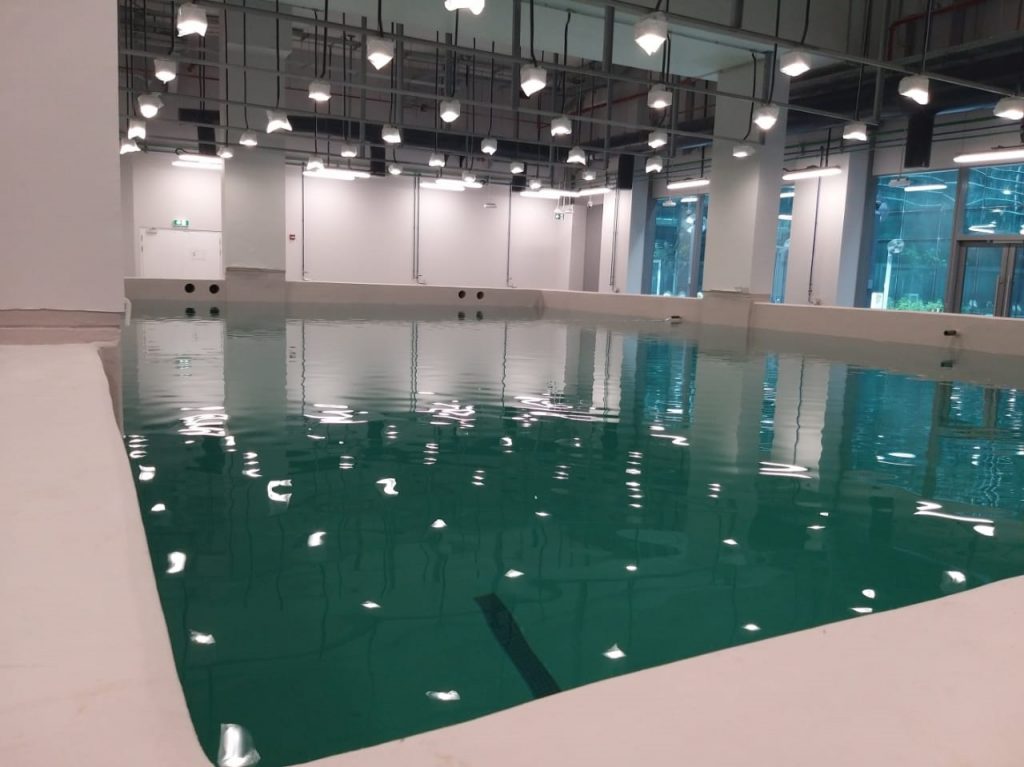 Labs G0010, C00059 and C00060 are dedicated for this theme.The primary objective is to investigate robot based emergency response systems for extreme environments.

Here, we deploy collaborative robots (drones DJI Wind 4, Agras MG-1S and ground vehicles Jackal) in a fire related urban search and rescue (USAR) scenario. It addresses the following objectives related to the application of a team of UAVs and UGVs in a high rise building fire scenario:

Some of the noteworthy equipment used are the Optitrack motion capture system, various small drines, and the Quanser QDrone , which are used for indoor localitization and algorithm testing.

Visual Signal and Processing lab L03029 is dedicated for this theme. The focus will be on autonomous and persistent surveillance of civil and industrial infrastructures, based on easy to deploy unmanned vehicles.

VSAP focuses on vision and perception research, where the key and most important equipment needed are high performance workstations and computers for training the deep learning models required for autonomous vehicle, infrastructure inspection and human tracking projects. The lab is equipped with state of the art machines that deliver the high performance computing needed for deep learning applications, these include Nvidia Quadro graphic cards and the latest Nvidia RTX graphic cards. In addition, an array of professional grade and specialized cameras for depth, tracking, and localization are at disposal for the creation of novel visual datasets.

The following State-of-the-art sensors and cameras are used:

Other sensors in VSAP include:

Virtual simulation environment for magnetically-driven active endoscopic capsule. The environment will integrate the haptic feedback into the endoscopic system to allow the doctors to control the robotic capsule movements based on both vision and interaction forces with the colon environment. Give the human operator adequate guidance and an intuitive control interface to perform the best procedure possible. Introduce new diagnosis and treatment procedures such as performing palpation inside the colon, feeling the strength of the colon contractions and its effect on the capsule motion, and control and feel the pressure of a tool attached to the capsule for a possible new intervention procedure. Development is done on both Gazebo and Sofa, where the later allows