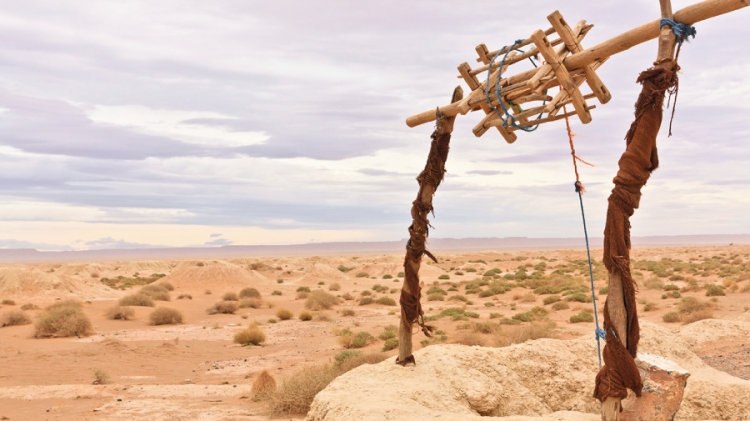 Water scarcity and water security are two issues closely linked and are very much on the minds of leaders around the world. Last year on World Water Day, His Highness Sheikh Hamdan bin Zayed Al Nahyan, UAE Deputy Prime Minister and Chairman of Environment Agency – Abu Dhabi issued a statement revealing the limits of the emirate’s own natural water resources, which saw an 18 percent reduction in the groundwater supply since 2003. On top of that, he warned that Abu Dhabi’s total consumption of water resources exceeds by 24 times its natural recharge capacity – due in part to the rapid social and economic development that the emirate has witnessed in the last four decades.

What makes that rate of water consumption a challenge is the fact that the UAE lies in a very arid region, with limited rainfall and few bodies of fresh water. Traditionally, those who call the UAE home have sourced the sweet water needed to sustain their families, livestock and farms, mainly from groundwater, either using wells or spring-fed aflaj systems . But over time many of the wells and springs that bring up the ancient water that lies deep in the earth have begun to run dry. The aquifers – which are an underground layer of water-bearing permeable rock or unconsolidated materials – are being emptied of their precious cargo of natural fresh water. And as the UAE sees only around 100mm per year of rain and an evapotranspiration rate of approximately 2.5 m per year, the rate of recharge for those aquifers is very slow. In the past, once an aquifer and the wells it sourced had run dry, there was nothing much that could be done to reclaim it.

In modern times, hydrologists have investigated recharging those aquifers with water from other sources. The benefit of artificially recharging an aquifer is that you return the source of water to the native plants and animals that depend on it and also, you provide your community with a natural water reserve in case of emergency. Currently, the UAE relies very heavily on desalinated sea water for domestic and commercial consumption – with some reports stating that upwards of 90 percent of the water used in the UAE now originates in desalination plants. Still, there is great benefit in ensuring there is a ready supply of groundwater in case of incidences where the desalination plants may not be able to operate – as was seen during the First Gulf War. An aquifer may serve as a self cleaning, self maintaining water storage system.

But artificially recharging an aquifer comes with some challenges. Aquifers are the result movement and linkages that occur below the earth’s surface over a period of eons and are resultantly complex. Inserting a foreign body into a natural ecosystem can potentially have repercussions. It is often hard to know where water from aquifer ends up, and the impact of any trace contaminants present in it can have on the sensitive ecosystem around it. With the help of isotopic fingerprinting methods that we are researching at the Masdar Institute of Science and Technology, scientists can track the flow of water through an aquifer by tracking tracers such as Boron that remain in water after reverse osmosis desalination, a desalination process gaining popularity.  In addition to this, we can track the fate of any pre-existing ionic contaminants in the aquifer, such as bromate, nitrate, and perchlorate, which can have an adverse effect on the health of humans and animals consuming the water.  We are currently pioneering the use of two different existing fingerprinting techniques – ion chromatography and triple quadruple mass spectrometry – in tandem, to produce the kind of results that only a few research laboratories in the world can achieve. Our joint system allows us to ionize the ion further to look at the signature of different fragments and isotopes within that ion.  The natural isotopic ratios of elements within ions in water vary with the source of water and the type of processing that the water has undergone.  Our method effectively ‘fingerprints’ an element, and based on that, we can then track the water that carries the fingerprinted element wherever it goes.

The resulting water signatures can then be used to monitor the health of an aquifer and the impacts of artificial recharge. The information collected by utilizing our method can potentially show the UAE how best to recharge its natural water tables to return its fragile desert ecosystems to vibrant and sustainable health, as well as providing greater water security for its people.

Our research into isotopic signatures in ions has some other helpful applications in the water realm. Desalination, which I briefly mentioned earlier, is one of the innovative technologies that has allowed the UAE to reach its rapid levels of growth, modernization and development. But the system – where sea water is run through a number of processes to render it potable for human use – takes progressive management and monitoring to mitigate the impact of its brine byproduct on the environment. Water and power authorities in the UAE are always looking for ways to improve desalination systems. One application for our research into isotopic signatures is in tracking the flow and dispersal of brine from the discharge outfalls of desalination plants. By tracking the isotropic signature of the brine outflow, we can help ensure that no portion of the discharge area is oversaturated. The fingerprinting of the brine can show you how long it takes to for brine to disperse and where it goes, in order to ensure that it adequately mixes with the sea water. Based on that, a mixing radius can be established for the discharge points, thereby avoiding areas for placing desalination plant sea water intake points. This approach also helps safeguard the health of the plant and animal life that share the environment with our desalination plants.

As the late great Sheikh Zayed said: “On land and in the sea, our fore-fathers lived and survived in this environment. They were able to do so because they recognized the need to conserve it, to take from it only what they needed to live, and to preserve it for succeeding generations.”  It is the hope of our research teams at Masdar Institute that our work in isotopic signatures in ions may help the UAE’s residents do just that – preserving our environment and natural resources for succeeding generations.

Dr. Farrukh Ahmad is assistant professor of water and environmental engineering at the Masdar Institute of Science and Technology.