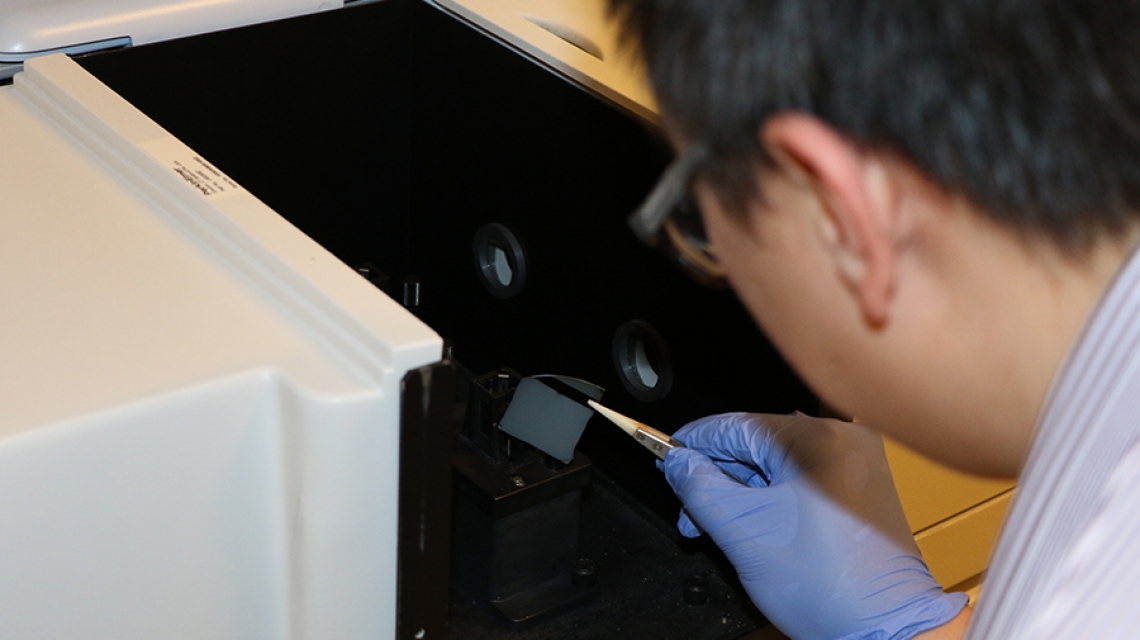 Masdar Institute faculty are part of a collaborative team of researchers that has discovered a novel way to significantly increase the amount of sunlight that a solar absorber can convert into heat. By converting more of the solar energy that reaches the Earth’s surface into heat in a low-cost way, the solar absorber can help make sustainable technologies that rely on solar heat, like solar thermal technologies, more efficient and affordable.

Dr. Zhang co-authored the paper that describes this research, which was published last month in the journal Advanced Optical Materials, with a team of researchers from Masdar Institute and the Massachusetts Institute of Technology (MIT).

Dr. Nicholas X. Fang, Professor of Mechanical Engineering at MIT and co-principal investigator of the project, said “We are very excited that this MIT-Masdar Institute collaboration has led to new insights in the emerging field of plasmonics, which quantify the interactions between the electromagnetic field and free electrons in a metal. By trapping sunlight with plasmonics, the solar absorber developed by our team can achieve higher efficiency levels. We look forward to testing the overall solar conversion efficiency of the coating materials in the next step of our research. ”

The work contributes to a larger Masdar Institute-MIT research project, which is aimed at developing a solar-powered, combined electrical power plant and cooling system.

The team’s novel fabrication technique involves patterning a solar absorber with tiny holes with diameters less than 400 nanometers (that’s roughly 200 times smaller than the width of a human hair), cut into the absorber at regular intervals.

The tiny holes penetrate the entire absorber greatly enhancing the range of solar energy that can be absorbed. Close to 90% of the all the wavelengths of light that reach Earth’s surface are absorbed by the nano-hole patterned absorber. Unlike traditional solar absorbers, this absorber requires very little material and consists of only two layers: a semiconductor film and a reflective metallic layer, with a total thickness of 170 nanometers.

“This idea can be applied to most conventional solar absorbers. With this unique patterning, the absorbers can be boosted to harvest more solar energy from the ultraviolet and visible regions of the electromagnetic spectrum,” said Masdar Institute postdoctoral researcher Dr. Jin You Lu, who is the paper’s lead author along with MIT postdoctoral researcher Dr. Sang Hoon Nam.

The sweet spot of a solar absorber then, is that point when optimal levels of sunlight are absorbed with the least amount of energy escaping back into the atmosphere through radiation. Dr. Lu believes they may have found this sweet spot.

“By taking advantage of the ultrathin film coatings and patterning, we are able to maximize the absorption spectrum while keeping the solar absorber’s emission levels quite low,” Dr. Lu explained.

The team is now working to optimize the system with alternative metals for the reflective metallic layer, such as aluminum, copper or silver, which will reduce the costs of the solar absorber even further.