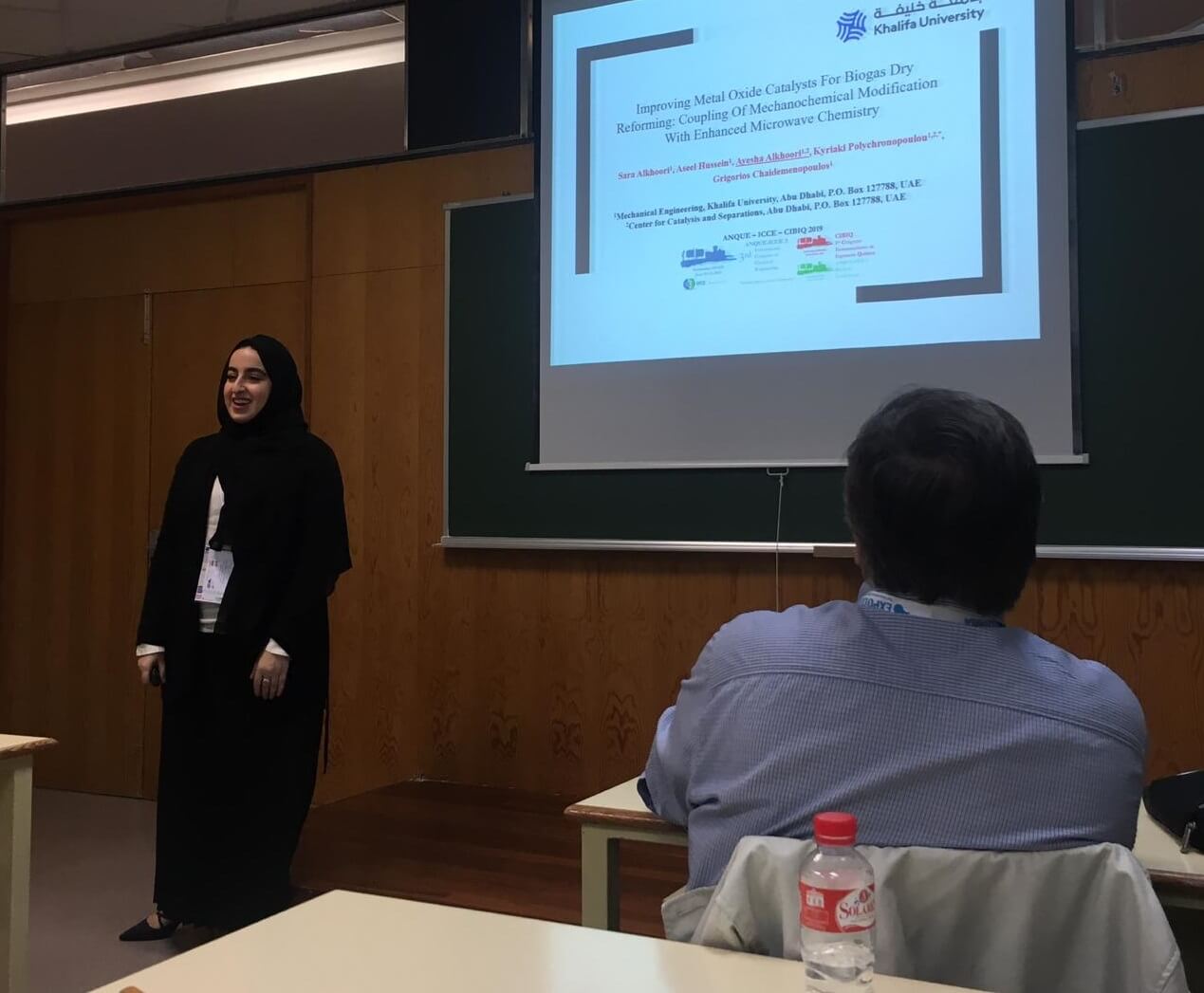 KU PhD student Ayesha AlKhoori delivered two talks on her pioneering research in the field of catalysis and separation at the 3rd ANQUE-ICCE International Congress of Chemical Engineering, held in June in Santander, Spain. Alkhoori is the first PhD student to study under the Petroleum Institute’s Center for Catalysis and Separation (CeCaS) at Khalifa University. Working under Dr. Kyriaki Polychronopoulou, Associate Professor of Mechanical Engineering and Director of CeCaS, Alkhoori is helping to advance catalysis as a means to produce cleaner, more efficient, and economically viable fuels and chemicals.

In her first presentation, titled “Improving Metal Oxide Catalysts for Biogas Dry Reforming: Coupling of Mechanochemical Modification with Enhanced Microwave Chemistry,” AlKhoori described a research project aimed at developing catalysts that can convert carbon dioxide and methane into syngas – a process known as ‘dry reforming of methane.’ Syngas is a mixture of hydrogen gas and carbon monoxide that can be used as a starting material for producing valuable chemicals under the proper catalytic reaction conditions.

While the environmental and economic benefits of dry reforming of methane reactions are very high, Alkhoori explains that the main problem hindering the commercialization of this technology is the issue of carbon formation and sintering on the catalysts, which causes deterioration of the catalyst’s activity.

In this project, Alkhoori and Dr. Polychronopoulou are working with PhD student Aseel Hussein and MSc student Sara AlKhoori to synthesize a catalyst made from copper and the rare earth metal cerium, using a very fast synthesis method that uses microwave energy rather than typical heating.

To do this, the researchers prepared the copper and ceria-based catalysts, and then modified them using different treatments.

“Traditionally, noble metal catalysts (based on platinum and gold) boost the reaction in terms of activity and stability. However, their high cost excludes them from applications of dry methane reforming. That is why we are developing catalysts with copper, a transition metal, which has high catalytic activity and selectivity at a lower cost, which makes them good candidates for the reforming reaction,” AlKhoori said.

The project is ongoing, Alkhoori explained, as her team continues to work on optimizing the catalytic system to further reduce the negative coking effect.

In her second presentation, titled “Copper-Ceria Nanomaterials as Catalysts for Low Temperature H2 Purification and CO Capturing in PEMFCs,” AlKhoori discussed a project she has been working on for over three years with Dr. Polychronopoulou. The project aims to overcome the challenge of carbon monoxide poisoning in catalysts used in proton exchange membrane fuel cells (PEMFC), a type of low-temperature hydrogen fuel cell. In a typical hydrogen fuel cell, catalysts (usually made from platinum) split hydrogen gas into positively charged protons and negatively charged electrons. The electrons are used to generate electricity while the protons pass through a membrane to combine with oxygen gas at the opposite end of the fuel cell to create water.

Alkhoori and Dr. Polychronopoulou have discovered a low-cost method to purify the hydrogen gas by developing a catalyst that oxidizes the carbon monoxide and converts it into carbon dioxide – a gas that does not interfere with the fuel cell. They developed a nanocrystalline catalyst made from copper and cerium oxide (an oxide of the rare earth metal cerium) using a microwave synthesis approach, which successfully converted carbon monoxide into carbon dioxide at low temperatures. Their catalyst is significantly cheaper to develop than traditional catalysts made of noble metals, such as platinum, ruthenium, rhodium, and gold, which means it is a commercially viable alternative to be used in real-world applications to eliminate catalyst poisoning and increase fuel cell efficiency.

The researchers have published five papers on this work, with a sixth currently under review. The papers have been published in Surface and Coatings Technology, Materials Research Bulletin, the Journal of Environmental Chemical Engineering, Molecular Catalysis, and Applied Catalysis A: General. 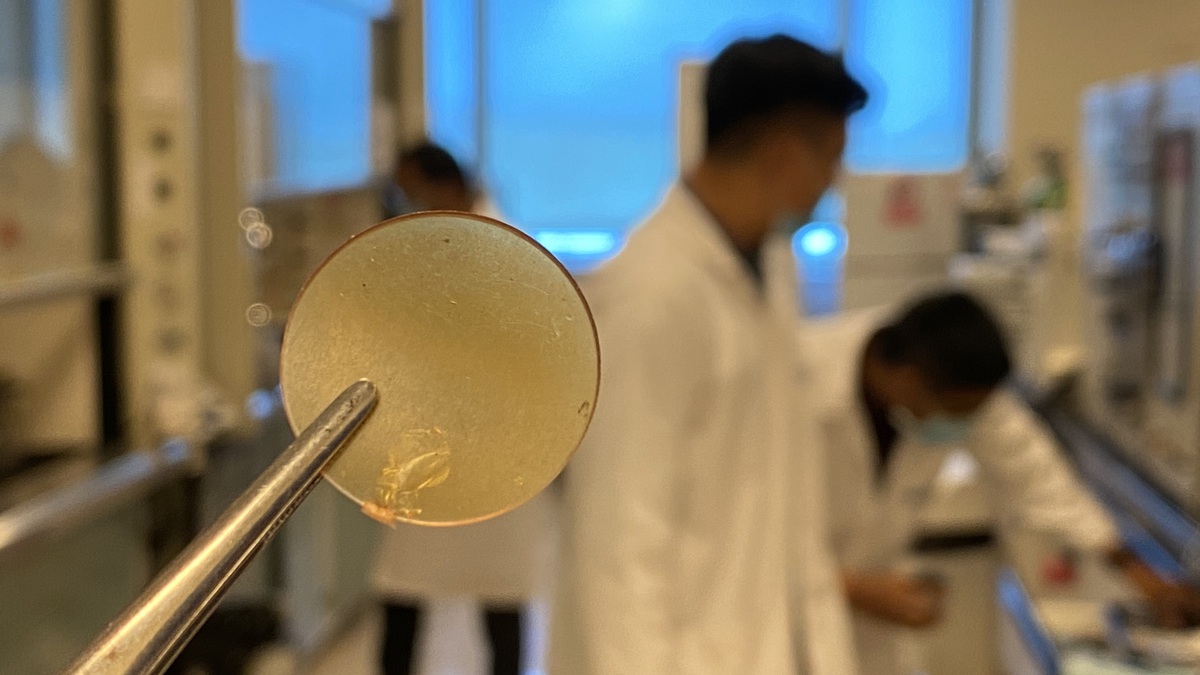