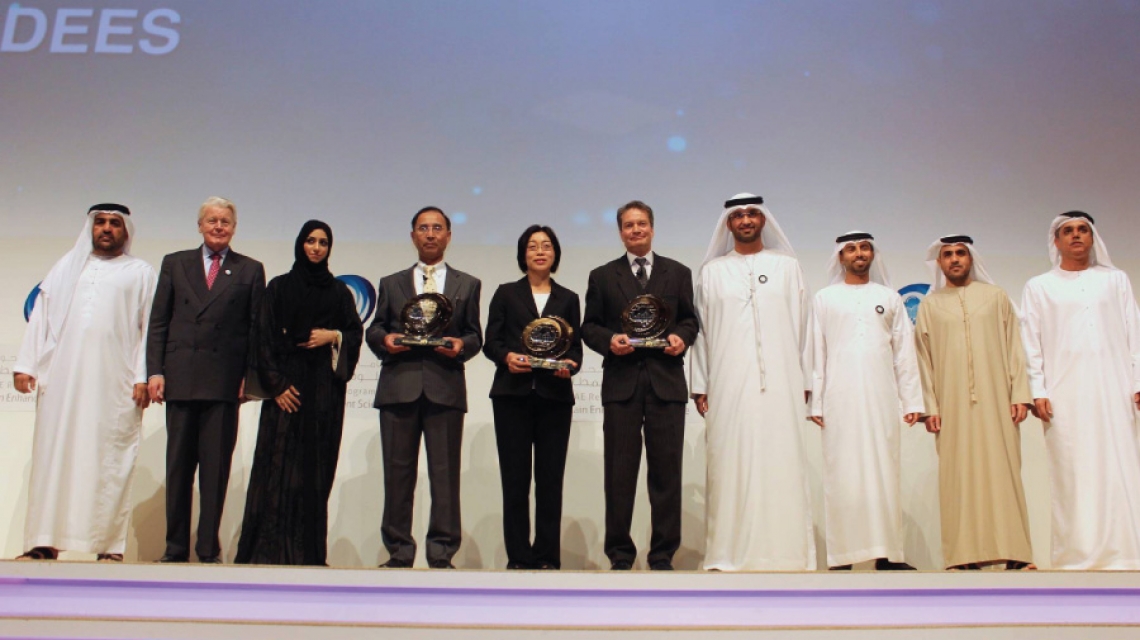 A team led by a Masdar Institute faculty member has been chosen as one of the three awardees of the inaugural UAE Research Program for Rain Enhancement Science 2016 grant program.

On behalf of His Highness Sheikh Mansour bin Zayed Al Nahyan, Deputy Prime Minister and Minister of Presidential Affairs, the award was presented by His Excellency Dr. Sultan Ahmed Al Jaber, Minister of State, UAE Special Envoy for Energy and Climate Change, and Chairman of Masdar, to Dr. Linda Zou, Professor, Chemical and Environmental Engineering, during a special ceremony organized as part of the Abu Dhabi Sustainable Week 2016.

Launched by the Ministry of Presidential Affairs of the UAE last year, and overseen by the UAE National Centre of Meteorology and Seismology (NCMS), the inaugural cycle of the UAE Research Program for Rain Enhancement Science has awarded three grants totaling just under US$5 million (AED 11 million) for a three-year period to three projects aimed at increasing rainfall in arid and semi-arid countries like the UAE.

Masdar Institute’s awarded proposal was selected out of 15 shortlisted project proposals. The project outcome is expected to help increase rainfall in the UAE and other arid or semi-arid regions. It will also position the UAE as the global leader in the science, technology and implementation of rain enhancement, and spur additional research partnerships globally.

Water is strategically important for the UAE as the country ranks among the world’s top 10 driest countries with annual average rainfall standing only around 78mm (three inches). According to the UAE Ministry of Environment and Water, the country has around 130 dams and levees with a storage capacity of about 120 million cubic metres to preserve rainwater that can help augment groundwater levels. The country also accounts for 14 per cent of the world’s desalinated water, and remains the second largest producer of desalinated water.

Alya Al Mazroui, Manager, UAE Research Program for Rain Enhancement Science, said “There is now an increasing imperative for countries to strengthen their water resilience by promoting research and development, investment in new technologies, more efficient resource conservation and effective international partnerships. Here in the UAE, we welcome such research and the application of new technologies to ensure that rain enhancement operations are more efficient and more productive, for the benefit of arid and semi-arid regions, and beyond.”

Dr. Steve Griffiths, Vice President of Research at Masdar Institute said: “Water is an area of strategic importance to the UAE and any rain-related research will remain highly relevant to the region. The award won by Prof. Zou signifies the extent of our commitment to finding solutions to challenges in strategic areas including water, and energy as well as advanced materials. Our research will continue to focus on bringing long-term benefits to the UAE and the region.”

Prof.Zou’s project titled ‘Using nanotechnology to accelerate the water condensation nucleation and growth for rain enhancement,’ explores the use of nanotechnology to engineer particles that can serve as a nuclei for raindrop formation when used to seed clouds.

This promises to achieve great impact on key aspects of cloud seeding, which include water condensation, collision-coalescence for warm clouds, and nucleation and crystal grow for colder clouds.

Prof. Linda Zou said, “I am really pleased because my proposal has been selected as one of the awardees, and now I have a good opportunity to work on this exciting topic. I will start soon to recruit the suitable research staff and students, and kick-start the project.”

Four international experts in the areas of nanotechnology, interfacial science, characterization, and cloud modelling will work together on this proposal. From Masdar Institute’s side, the team includes project leader and Principal Investigator Prof. Linda Zou, Co-Principal Investigator and Microscopy Facility Manager and Principal Research Scientist Dr. Mustapha Jouiad. The two international co-investigators are Professor Loh Kian Ping from the National University of Singapore and and Professor Mladjen Curic from the University of Belgrade.

In April 2015, a total of 325 scientists and researchers affiliated with 151 organizations applied to participate in the UAE Research Program for Rain Enhancement Science. Applicants selected from 34 countries around the world cooperated on the submission of a total of 78 pre-proposals. In May, the program’s technical committee narrowed-down submissions to a shortlist of 15 research teams, which included Prof. Zou’s project.

Prof. Zou explained: “The recognition of the value of this project is a step in the right direction to advance rain enhancement technology, particularly cloud seeding by cloud condensation nuclei, and create new knowledge, new data and most importantly, new cloud seeding materials which are more efficient in increasing rainfall in UAE and other arid and semi-arid regions.”