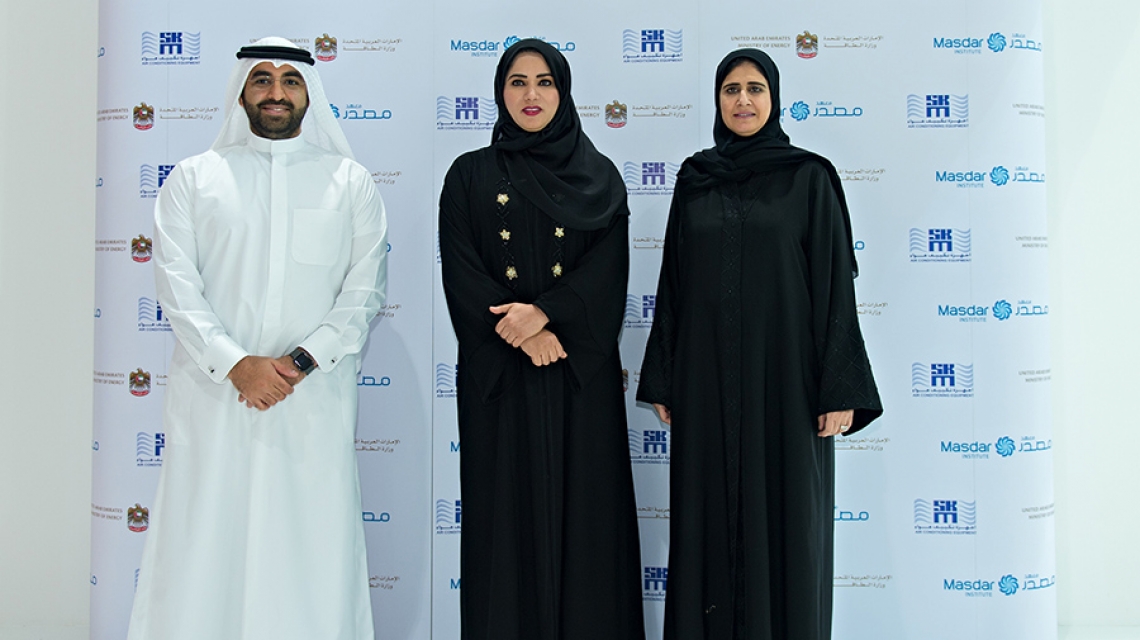 If adopted nation-wide, the new efficient chillers could provide the UAE with national energy savings of over 20% while lowering life-cycle cooling plant costs. Currently 50% of the UAE’s electricity consumption goes towards cooling energy requirements, which can rise to as high as 75% during peak-day electricity use in the summer. The new innovative technology could also be exported to other GCC countries with similar climate and energy consumption scenarios, enhancing the UAE’s diversified knowledge economy.

The collaboration agreement was signed in the presence of officials from the UAE Ministry of Energy, UAE-based SKM Air-Conditioning, and Masdar Institute on the sidelines of the World Future Energy Summit (WFES) 2017, which is being held from 16-19 January at the Abu Dhabi National Exhibition Center (ADNEC) as part of the Abu Dhabi Sustainability Week 2017.

Her Excellency, Eng. Fatima al Foora said: “The Ministry of Energy seeks to incentivize and facilitate applied research in the energy sector in key areas such as air conditioning. We have found the Triple Helix to be an effective model for encouraging the collaboration between industries, academia and government on key projects. This is fundamental for development of a knowledge based economy as has been repeatedly seen in the most innovative economies of the world. In the future, we aim to develop more of such triple helix projects with participation of more industries and academic institutions in the UAE.”

Mohammed Al Beshara said: “In operational strategies, SKM Air-conditioning always believes in its principle to partner with international and local organizations and institutes to continuously develop its air-conditioning and air treatment products. At the same time, it is also developing other new products to achieve maximum energy efficiency, while taking environmental aspects into consideration. We have always believed that best results will be reached only through partnerships like the one we now have with the UAE Ministry of Energy and Masdar institute. We also believe that this should not be the only collaboration with these highly reputed partners but the first of many more to come.”

Dr. Behjat Al Yousuf, Interim Provost, Masdar Institute, said: “Our collaboration agreement with the Ministry of Energy and SKM Air Conditioning highlights Masdar Institute’s ongoing commitment to developing innovations of relevance to the needs of the UAE and wider region. We are confident this partnership will help the UAE reduce its energy consumption, which is critical to achieving its sustainability goals.”

“Based on the current actual cost of electricity production in Abu Dhabi, the potential savings, at 100% market penetration of all optimized chiller and AC types, amounts to over AED5 billion per year,” said Dr. Armstrong.

In the previous two-year project, the team established minimum energy performance standards (MEPS), which are life-cycle cost effective for chillers in the UAE with performance levels 40% above the MEPS prevalent in temperate climates.

They found that an improved compressor, larger condenser and evaporator, sub-cooling control, variable speed condenser fans, and a high-efficiency compressor motor all contribute significantly to the energy improvements achieved by the chiller design with lowest amortized cost.

“This project will prove beyond any doubt in side-by-side testing that a GCC-specific high-performance chiller design pays for itself in energy savings,” Dr. Armstrong added.