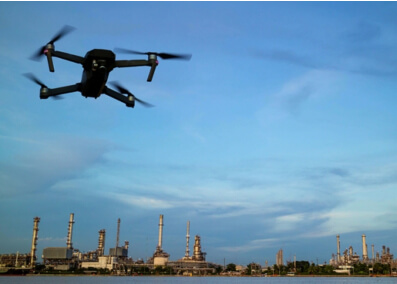 Although the most sophisticated military and commercial drones cost millions of dollars, small drones for hobbyists are now very inexpensive and widely available. Most people purchasing a drone have no nefarious masterplan in mind: they’re enchanted by the use of a drone for a unique photographic perspective, smooth video footage, or even racing. Essentially, they’re a fun toy in many cases.

Beyond entertainment purposes, however, this technology has a big future. While the market for consumer drones may still be in its infancy (despite a lowered price point), drones can be used by farmers to save time scouting their crops to maximize their yield; for unmanned delivery; to enhance sports TV coverage; and aid in military surveillance and civil security.

But as useful and entertaining as drones may be, these flying gadgets can also be put to less friendly purposes. After all, the machine abides by the will of the person controlling it. Hence, drones are being used to smuggle contraband into prisons, evaluate security measures and operations of potential targets for robbery or terrorism, and just cause disruptions in busy places.

Gatwick Airport near London, England, hit the headlines in December 2018, when hundreds of flights were cancelled following reports of drone sightings close to the runway. The reports caused major disruption, affecting approximately 140,000 passengers and 1,000 flights during the Christmas period. During the incident, the Ministry of Defense deployed the Royal Air Force (RAF) Regiment to counter the drone as it disturbed the airspace around the airport for almost 36 hours, disappearing and reappearing to prevent any airplanes from landing or taking off right in the heart of a busy travel period.

Although it is illegal to fly a drone within one kilometer of an airport in the United Kingdom, it’s hardly difficult for a drone pilot to flout those rules — a one kilometer search radius affords plenty of opportunity to evade detection — evidenced by the frequency of drone infringements on airspace.

For this reason, there have been several near misses with drones coming within a few feet of commercial aircraft — the British Airline Pilots Association reported there were over 100 near misses in 2018 in the UK alone. After the incidents at Gatwick Airport in December 2018, the industry isn’t taking any chances. While this wasn’t the first time an airport has been closed due to illegal drone activity, it may well be the most infamous and most expensive with airlines losing revenue of USD64.5 million and incurring the costs of providing passenger accommodations due to missed and delayed flights.

The United Kingdom isn’t the only country suffering drone misuse—Dubai airport was among the first in the world to experience drone activity closing runways when in 2015, the flights were halted for 55 minutes. In 2016, three more incidents occurred and then February 2019 saw a further 30-minute closure as another drone strayed into the airport’s airspace. According to the Dubai Civil Aviation Authority, the cost of closing an airport can be AED3.6 million—per minute. Strict drone licensing, registration, training and stiff penalties have been introduced, with airport authorities in the UK approaching Dubai for advice on how to deal with drone incursions in the future.

Gatwick airport faced heavy criticism for its failure to capture or disable the drone and the RAF suffered similar backlash for its use of an alternative system to the Drone Dome, a counter unmanned air system (C-UAS) used by the British and US special forces in counter terrorism missions. Companies and militaries are investigating technologies that can apprehend drones or render them incapable of causing damage, but the fact remains, there is no completely reliable method of taking down an intruder drone.

The first challenge of the Mohamed Bin Zayed International Robotics Challenge (MBZIRC) in 2020 deals precisely with this issue as a team of UAVs must autonomously track and interact with intruder UAVs, to ultimately capture and neutralize the intruders.

All the MBZIRC 2020 challenges were developed to push the technological and application boundaries in robotics, focusing on fast, autonomous navigation in complex environments to complete a task. Challenge 1 puts this speed and autonomy to the test, with the UAVs needing to use robust perception to track dynamic objects and then capture the intruders.

While traditional piloted UAVs would face enough challenge in this arena, the most important part of MBZIRC is the autonomous completion of tasks. The team of UAVs must avoid accidental collisions, remain in the challenge arena and maintain contact between themselves, while identifying, tracking, and devising a plan to apprehend the intruder drone. They will need target detection algorithms for both long-range and short-range identification, depth sensing systems and tracking technology, along with a gripper to grab the intruder when they get close enough.

A large ask, but as the 25 teams selected for MBZIRC 2020 Challenge 1 hail from some of the world’s top robotics labs, expectations are high for success.

The results of this challenge will go a long way in developing systems that can be utilized by airports around the world to intercept intruder drones and avoid a repeat of the incident at Gatwick Airport.