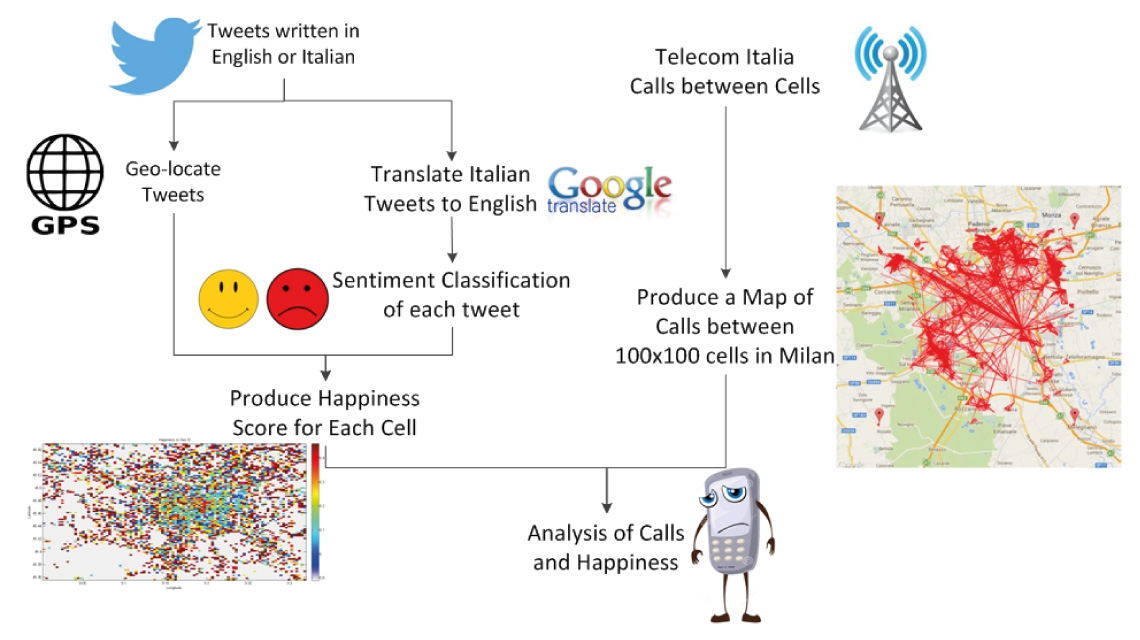 Abu Dhabi-UAE: 14 April, 2014 – Masdar Institute of Science and Technology, an independent, research-driven graduate-level university focused on advanced energy and sustainable technologies, today announced that a project presented by its Social Computing & Artificial Intelligence Lab has become one of the 10 finalists out of 652 entries submitted for the Telecom Italia Big Data and Trentino Open Data Challenge 2014.

The Masdar Institute entry titled ‘Misery Loves Company: Twitter Sentiment Reveals Assortative Mixing of Aggregate Happiness in Urban Communication Networks’ was chosen from among 652 entries submitted to the Challenge. A committee comprising prominent international experts in academia and research evaluated the ideas for the contest that was open to individuals and teams belonging to any academic institution or companies.

The Big Data Challenge was organized by Telecom Italia, in collaboration with Massachusetts Institute of Technology (MIT) Media Lab, Politecnico di Milano, Trento RISE (with the contribution of Fondazione Bruno Kessler and University of Trento) and European Institute of Innovation and Technology (EIT) ICT Labs.

The contest was designed to stimulate the creation and development of innovative technological ideas in the field of ‘Big Data’. Participants were asked to transform existing data sets into innovative final products such as applications and ‘infographics’. Professionals and enthusiasts in the industry competed globally by choosing one of the three ‘Tracks’ – app, data analytics and data visualization. The Masdar Institute entry also came among the six finalists in the ‘data analytics’ track.

The ‘Misery Loves Company’ project by Masdar Institute’s Social Computing & Artificial Intelligence Lab investigated the relationship between communication among different geographic areas within an urban center and the ‘happiness’ levels in those areas, as measured by social media content production. The study has revealed that ‘unhappy cells attract a disproportionately larger volume of communication compared to happy cells’ and ‘communication plays an important role within each cell’.

Results from the study may help contribute to greater understanding of the relationship between social structure and urban psychological well-being, which has consequences on productivity, innovation, and crime. Furthermore, the findings also inform the design of policies and strategies for improving urban well-being by taking into account the urban communication structure.

Dr. Rahwan said: “Being among the 10 finalists out of 652 teams in an open international challenge means we were in the top 1.5%. This victory is a testimony to the fact that Masdar Institute is now among the leading research universities in the world in the analysis of big data. We could not have done this without the tremendous effort by the MSc and PhD students, who worked relentlessly on making a solid submission. Congratulations to the students whose dedication has brought us this success.”

The Social Computing & Artificial Intelligence Lab has had a number of international successes in recent years. In 2012, Alshamsi won the ‘Young Emirati Researcher’ Award, which was convened by the National Research Foundation (NRF). Also in 2012, the Lab won the ‘US State Department’s Tag Challenge’, a one-off international competition to test the power of social media in locating individuals. The Lab also has the distinction of publishing the first-ever paper from the UAE in the respected journal Science.